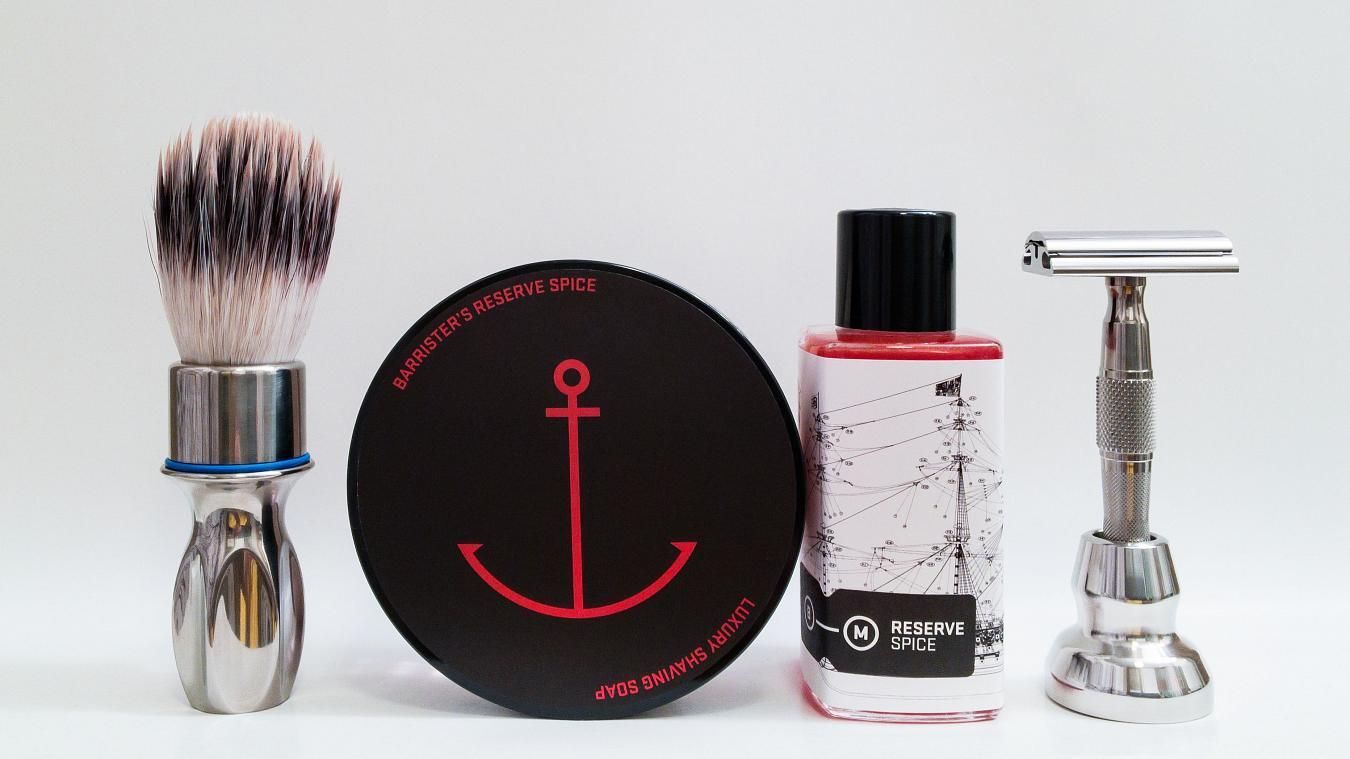 The Barrister's Reserve soaps are dropping today! Here's the first review of Spice - the vintage Old Spice scent by Shulton - reborn in this faithful recreation containing top-shelf, modern ingredients in #soap and #aftershave!

Who says the old ways aren't the best ways? Barrister’s Reserve Spice is a slice of vintage Americana. Featuring notes of carnation, nutmeg, vanilla, and tonka bean, Spice is great for when you're looking for a bit of history. Your suave, dapper grandfather? Yeah, he wore this.

I've covered the aftershave and scent quite extensively (and the first to do so) in this Barrister's Reserve first impression and review of the Spice aftershave. This review is all about the soap, which will be generally available on June 9, 2017 for $17.99 (the aftershave is $19.99). I did an initial review of this soap (from the sample) earlier, but wanted to hold off with my final impressions until I had a full-sized tub. Well, today's that day! Of course, if you really want to get a sense of what it's all about... I have more Barrister's Reserve reviews than you can shake a stick at and even a History of Barrister and Mann which covers it (and everything else) as well.

As I mentioned above, it's a faithful recreation of vintage Old Spice by Shulton. To recap, it's got top notes of nutmeg, lemon, orange, star anise and aldehydes, middle notes of carnation, jasmine, geranium, cinnamon, heliotrope and pimento and base notes of ambergris, benzoin, cedar, vanilla, tonka bean, and musk! Got all that? It smells great, and lasts a long time. Scent strength of both is a solid medium and longevity of the aftershave is 6+ hours. Quite impressive.

Be sure to check out the review of Barrister's Reserve Spice aftershave for a lot more information on that - and details behind this scent!

I'm pleased to say that the soap captured the scent perfectly and itself was sorely needed. I prefer combos to even include a deodorant, but that's rare. So the minimum, in my opinion, is a soap and aftershave. Anyway, as I learned with the sample, the soap is softer than the usual #BarristerMann soap. Think L&L Grooming as far as consistency. As with that soap, I recommend a wetter, stiffer brush - with a light touch in loading. Load a bit less than you might usually; with its soft consistency, the brush will be picking up plenty of it. 15-30s is plenty (and recommended). Add water slowly to taste.

The lather ranged from quite dense and drier to (slightly) more fluffy and wetter with a decent range and water latitude in between (no surprises there). When dialed in, the lather was seriously thick and creamy with incredible cushion and just as good a primary and secondary lubricity. Easily among the slickest soaps out there - especially on the residual side. Resulting face feel was also quite good, and it rinsed off quickly and cleanly. With all the face food in the soap, you could easily bypass an aftershave, which was just icing on the cake... Overall face feel is as good as it gets.

Here are the ingredients, which are listed on the underside of the tub... Chock full of tallowy goodness:

Let's take a deep dive look at the ingredients, mostly in order... Glycerin provides lubrication, and is a humectant (moisturizer). Sodium cocoyl isethionate is a surfactant. Sucrose cocoate is a hydrophilic emollient which means that it absorbs water and can help to balance or maintain moisture levels - it is also has a thickening effect, increasing the density of the lather. Sodium lactate is another effective humectant. Tocopheryl acetate can penetrate through the skin to the living cells, where about 5% is converted to free tocopherol and provides beneficial antioxidant effects. Trisodium ethylenediamine disuccinate is a naturally-derived chelating agent helping lather form in hard water. Cocos nucifera (coconut) milk, ricinus communis (castor) seed oil, sodium safflowerate (high oleic safflower oil) are all slippery skin foods.

The remaining ingredients include... Linalool is for scent, but has cleaning properties. D-limonene, coumarin, hexyl cinnamic aldehyde, alpha-iso-methylionone, citronellol, geraniol, cinnamic alcohol, isoeugenol, cinnamic aldehyde and evernia prunastri (oakmoss) extract are for scent alone. Eugenol is for scent, but has antiseptic properties. Benzyl benzoate is used as solvent and preservative. The rest are generally related to the soap itself and saponification of tallow, etc.

In testing the sample, I broke out one of the most "feared" and "notorious" razors known to man... The Mühle R41 with a fresh Astra blade. The choice of a more chill blade in this razor calms it down a little, but it's still among the most aggressive shavers out there. The soap made using it a real treat - hardly felt the open combs or the blade! It just glided over the stubble, leaving destruction in its wake.

Today with the full-sized soap, I used the #TimelessRazor in a .68 gap, smooth solid bar base plate and cap with a #Stork handle and a #PolSilver blade on shave three. This is a milder experience than the R41 to be sure, but nicely efficient. It performed with truly sublime smoothness with this soap... The razor glided over the skin and making additional touch-up strokes was an eye-opener with the residual slickness available.

Now that I have the full-sized tub of Barrister's Reserve Spice and got the true experience - I'm most definitely going to grab I picked up the other two (Cool and Classic) to complete my collection. Suffice to say, it's made by Barrister and Mann who you should already know and trust... And this is the latest and greatest formula (don't worry, the glissant base isn't going anywhere). It's primarily intended to be more universally face friendly, ingredient wise - better for sensitive skin. The scents you already know from the aftershaves and match perfectly. Happy #FriYAY!