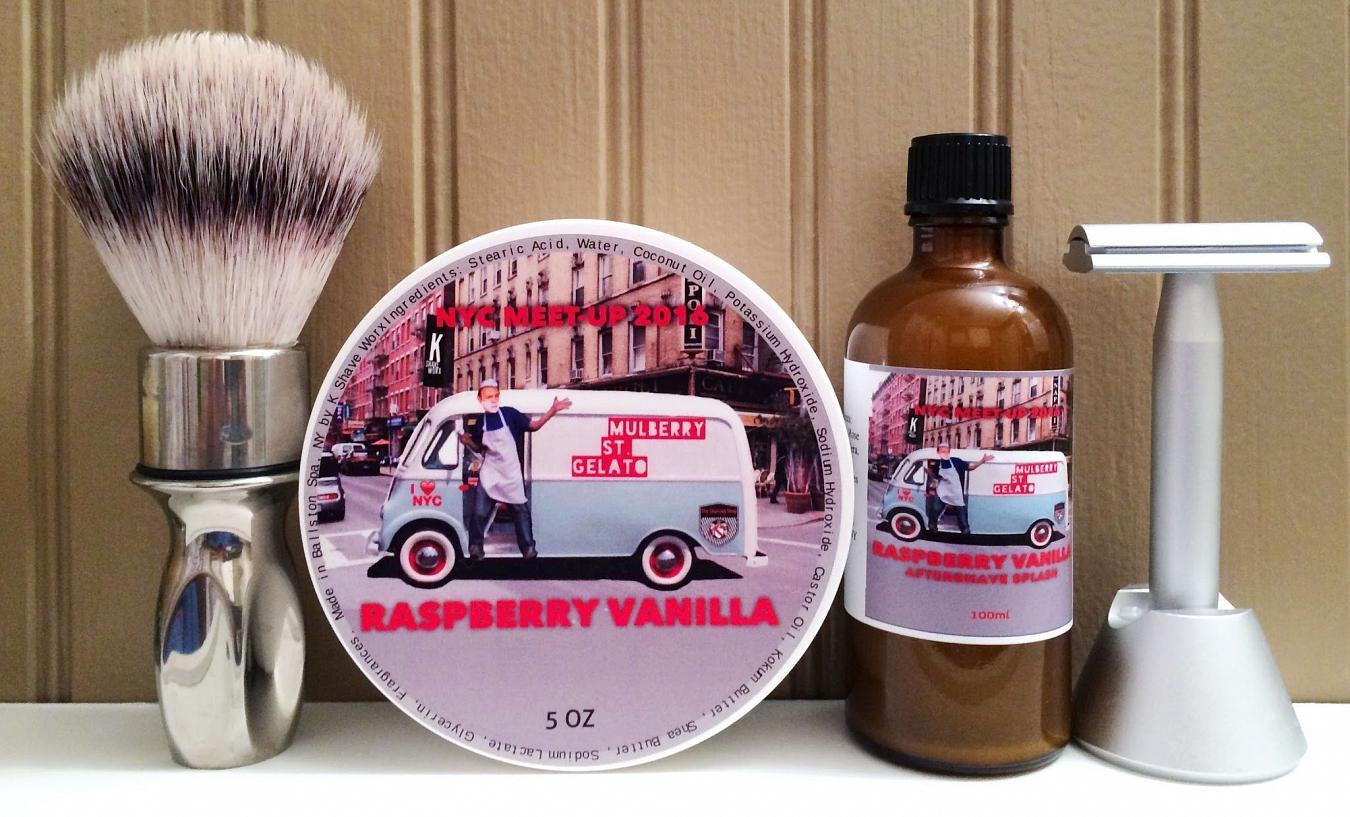 This was one of two combos for the event; I'll talk about the second one tomorrow. It was produced by the #kshaveworx team of Kevin and Kelly Daugherty out of Ballston Spa, NY. Ironic, as they live three miles from my sister in law and her family there. It was a special batch made up for the NYC Meet-Up at Pasteur Pharmacy and where I picked it up.

I have some additional samples of their scents, such as Frosen and Grapelicious which I'm very keen to try now. It goes without saying that they smell incredible.

I've huffed a bunch of their soaps before while at Pasteurs, but I was leery of starting with another vendor (I tend to buy in heavily if I like their products) and some of the scents seemed a little strange in the tub (something you should never really rely on as it's misleading more often than not - snort the aftershave instead). But when I heard the name, Raspberry Vanilla there was NO way I was passing that up... Two of my favorite fruity/gourmand scents. And K Shave Worx does these to a tee - most of their scents are simple, unpretentious and tend to be fruity. This one is no exception; if you're a fan of raspberry and/or vanilla, this stuff is the bomb! It's definitely more raspberry, but the underlying vanilla rounds it out and keeps it from being too cloying.

Performance was very nice indeed. The soap produced ample, creamy lather with excellent cushion, good glide and decent secondary lubricity. The scent strength in the tub is quite strong, but mellows out quite a bit lathered. I'm a sucker for heavily scented soaps, especially as tasty as this one, but I'd put it on the lighter side of medium when all's said and done. Most artisans give you 4oz. of soap - this one is 5oz. though their normal offerings are 2/6oz.! It has a fairly simple ingredient list but has all the basics of a fine soap:

The aftershave was a treat. I was a little worried initially when I saw alum as an ingredient. If you're familiar with PAA aftershaves, it can be a bit much sometimes. Not a problem here; I could hardly detect it if at all - and the other ingredients just left my skin feeling wonderfully soft and smooth. Not at all tacky. The scent is light and fades after maybe an hour or so tops, but that's not a bad thing - I think only tween girls might want to smell like raspberry and vanilla all day (though honestly, I'm not sure I'd mind - this stuff is delicious). The ingredients are quite simple here as well:

To finish off, I decided to go with #Guerlain L'Homme L'Eau Boisée which I think was a perfect fit; light and fresh, very summery. It's sort of a woody chypre, with notes of lime and mint at the top, a heart of rum and base notes of woods and vetiver.

Hardware today consisted of my #StandardRazors razor with a fresh #PolSilver blade. This is the ultimate combination IMO; ridiculously smooth and sharp - BBS today all the way. The #BSB Shaving Brush did the business in my #GTP scuttle which kept the suds warm throughout the shave.

A really, really nice shave today courtesy of "the K crew" whom I really want to thank for putting this together and extending it to the gang at the meet-up! I had a feeling I'd really dig it, which I do - and makes me especially happy that I picked up two combo sets! Oh yeah, baby. If you've never tried the products of K Shave Worx then definitely give them a try if the scents tickle your fancy! They're an exceptional value for what you're getting - and perform wonderfully.

I mirrored this shave on a later date, testing the amount of water in the lather; it held up well!