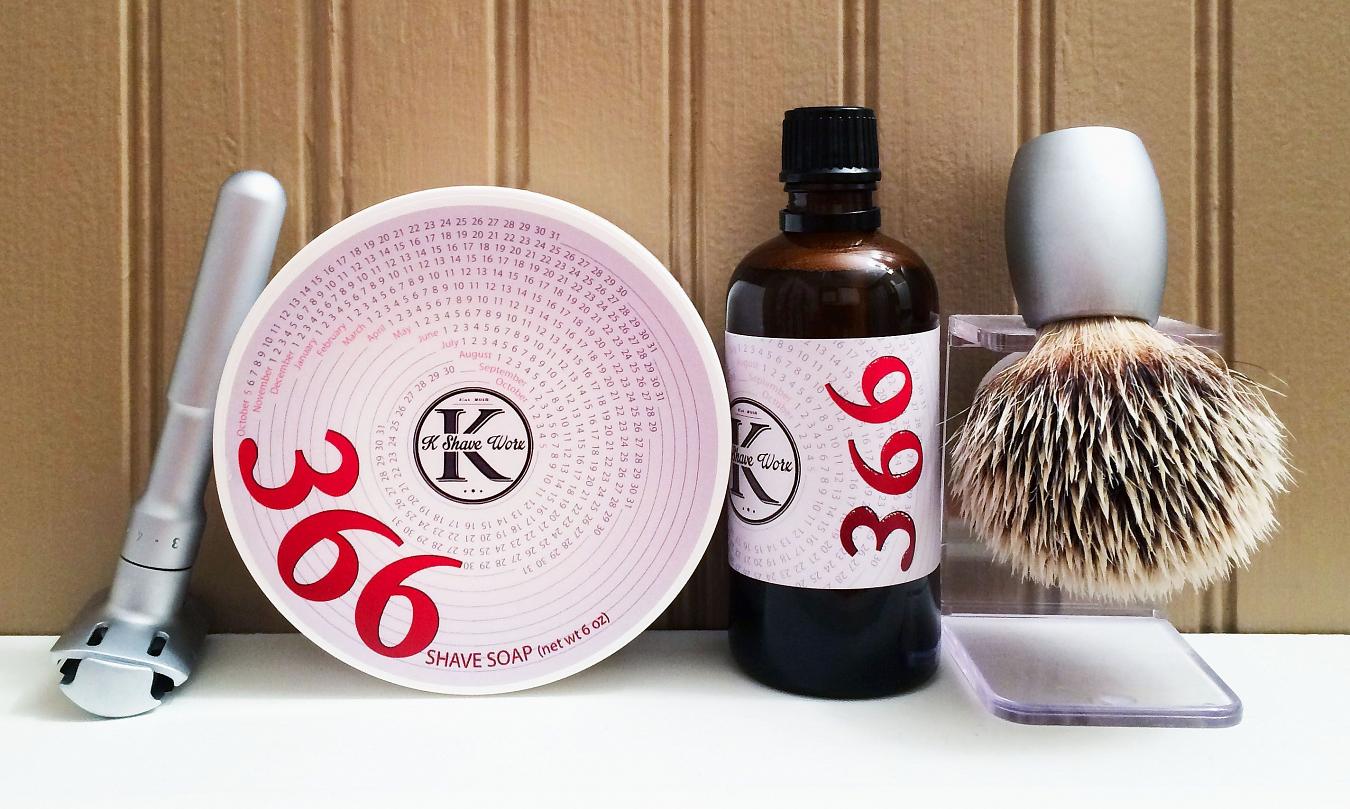 Today's SOTD is a special one; celebrating the one year anniversary of K Shave Worx with their release of 366 #soap and #aftershave combo that I mentioned was coming a short while ago!

So yeah, long story short - #KShaveWorx has been around for a year now! Congrats to them; it's great to see artisans flourish. They started off as a small Etsy shop (and still are, technically) but have enjoyed great word of mouth advertising and have been to more than a few shave meet-ups for which they've even created the official soap, like Raspberry Vanilla for the August 2016 NYC Meet-up. That's when I really started getting into them, and have since acquired (and reviewed) Berry Blast and Frosen and now today's - 366! A bit of trivia; it was called 366 because 2016 is a leap year... And it goes without saying, the calendar label is awesome. For context, here are all of my K Shave Worx reviews with more on the way soon!

366 officially has notes of cherry, orange, strawberry, pineapple, lime, eucalyptus, clove and vanilla. It sounds a little odd at first, but I assure you - they blend wonderfully. Take for example, the clove... A lot of people don't care for it, which is found in more than a few bay rums. You'd be hard pressed to pick the note out of the scent though. The eucalyptus is also more of a supporting note but definitely contributes... Both serve to round out the scent, add a bit of "twang" and add complexity, which is primarily the citrus and berries - but with a vanilla undertone. All in all, it's a rather nice scent - a bright, fruity cologne type vibe. I'd say it's more of a warm weather scent, but it's a bit lighter in strength than some of their other offerings, and should go very well with just about any scent you wish to layer on top. Especially since the aftershave doesn't stick around for more than a couple of hours (as is typical with K Shave Worx offerings). I wish they lasted longer, personally - but a lot of their scents are probably not something most gentlemen would want to linger and/or admit to liking. For example, the entire rose bush scent of Frosen or the very berry scent of Berry Blast. Hey, I'll admit it - I think they smell fabulous. But yeah, today I went with Tabac Man. Otherwise, performance is also typical of the brand - rather good! Not quite among the top-tier artisans, but once you dial it in, provides ample, creamy lather with excellent cushion, good glide and decent secondary lubricity.

Hardware for today consisted of the #Merkur #Futur razor with a #PolSilver blade on shave two and dialed to "2" for a more aggressive shave than yesterday. I figured I'd go with a matching #Dovo silvertip badger brush and did the deed in the #GTP scuttle to keep the lather nice and warm. It's getting chilly - and that means warm lather is even more warranted!

Overall, I'd say the scent of 366 is very nice. One of the more complex scents to come from K Shave Worx. I found the scent strength to be a bit weaker than usual (but not too much) and the longevity of the aftershave consequently also a bit shorter. Alas, that's the nature of citrus-based scents, since the oils are rather volatile. Soap performance was on-point. Regardless, it was a lovely shave today and I really enjoyed the scent! And as I've mentioned several times before, their software represents very good value.