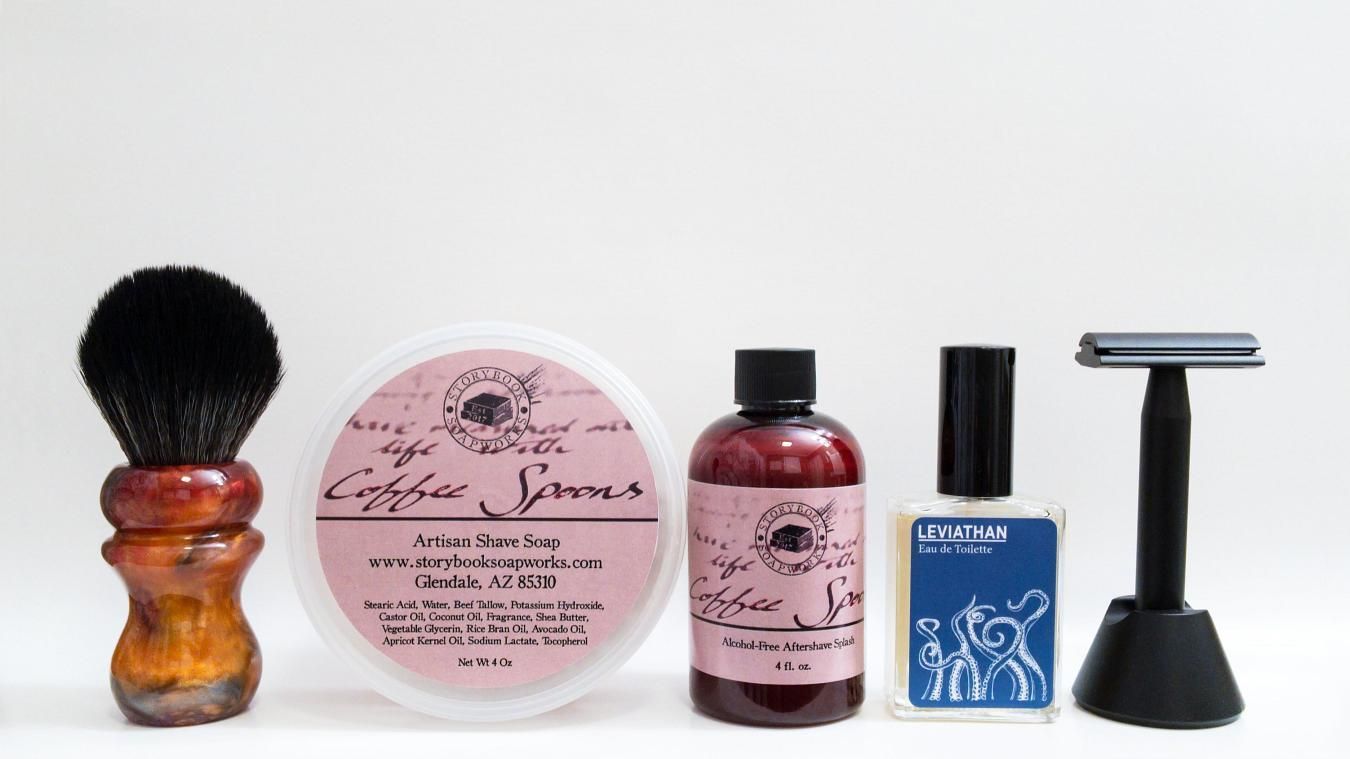 Nothing gets the lead out like coffee in the morning - extend that feeling to your shave routine with Storybook Soapworks Coffee Spoons #soap and #aftershave with a Barrister and Mann Leviathan #EdT finish!

Coffee Spoons is a story that we have been wanting to tell ever since Storybook Soapworks was created. This simple and elegant soap is made exclusively with Brazilian coffee essential oil. To build upon this rich aroma, we added Colombian cold brew directly our soap, which gives it a fresh coffee ground fragrance. There is not another coffee soap like this!

New to the den is an up-and-coming artisan out of San Diego, CA by the name of Storybook Soapworks which is run by a guy named Lauren Reed. What started as a soft launch on Reddit back in the spring of 2017 is progressing quite nicely. The first product, Elysium was often sold out on the site. Two Limited Edition releases followed over the summer by the name of Shaken and Hook. Most recently, a collaboration with Chatillon Lux slipped out and later announced formally, for the Le Foret de Liguest fragrance. Alongside this release on November 4, 2017 was Coffee Spoons and Visions & Revisions. It is the former you see here today.

First, let's talk about the packaging briefly. The soap tubs are identical to those used by another artisan, L&L Grooming - while the aftershave bottles are a little more unique. The labels also have a similar feel to those of said artisan, albeit of the prior generation... They're not waterproof and somewhat prone to occasional damage. None of these issues should be of any real concern, however... The soaps go for $16.00-18.50 and the aftershaves are $14.00-14.50. Considering the performance, it represents excellent value.

Performance is excellent and again, somewhat comparable to L&L Grooming. The soap made ample, creamy lather with excellent cushion and very good primary and residual slickness. It was easier to load than the former (as it was less soft and gooey) but produced a similar lather, if not quite as slick. I'd recommend loading with a stiffer, wetter brush to make things a bit easier just the same. The soap does like water, so add to taste until you get it dialed in. The ingredients are fairly nice:

The aftershave was quite nice, but perhaps lagging just a little behind the soap. I felt it lacked ever so slightly on moisturization... While topically it felt moisturized, the skin below wasn't quite on the same level. This may be a sign of the cooler weather and increased use of heating... I'll definitely have to use it more to form a definite opinion. I do tend to prefer balms going into the late fall and winter for just this reason. The healing was pretty good as well. Overall I'd give it an average to slightly above average on both, and a bit better than say Barrister and Mann Tonique aftershaves (which, granted, are alcohol based) but not as good as the likes of Wholly Kaw or Chatillon Lux just to put it in context. It's worth mentioning again the excellent value and given the artisan's nascent status, respectable performance.

The biggest thing I was looking forward to was the scent of Coffee Spoons. Who doesn't love coffee, right? But my love of this elixir of life goes beyond that. Making coffee-scented software can be difficult. Most tend to smell artificial, overly sweet or flavored. In Coffee Spoons the notes are very simple indeed... Brazilian coffee essential oil is present in both the soap and aftershave - but only the soap has the addition of cold brew Colombian coffee. While this gives the soap a nice light taupe color... You wouldn't want it in your aftershave; lest it stain your clothing (or your face for that matter). So the soap has a little more coffee to it.

The scent strength in the tub is a medium, maybe a tad lighter. Once lathered, unfortunately, it mellows a bit further. Regardless, it smells lovely! This is a beautiful rendition of a coffee scent that's unadulterated and natural. It smells like a good, black coffee. Not unlike the coffee note in Barrister and Mann Leviathan which I used as a follow up scent... Sillage is fairly low but longevity surprisingly good. This isn't a bad thing... Smelling like you spilled coffee all over yourself may not be the best approach to your day. That said, I can still smell the coffee as a skin scent some 4-5 hours later. I did an in-depth review of Leviathan before, which I would definitely recommend as a scent for layering. The segue is perfect.

Hardware for today included the #StandardRazors black edition with a #PolSilver blade on shave four, while the #WildWestBrushworks brush with its 24mm BOSS knot worked wonders with the lather in the #GTP scuttle.

A really pleasant shave this morning with a great, natural coffee scent that's sure to please the fans. The price belies the performance to be had and represents excellent value. I'd definitely recommend you give #StorybookSoapworks products a try if you find a scent that suits your fancy.

Of course, if you're a coffee fan... Be sure to check out the It's (Always) Coffee Season post for a complete list!

Awesome review! This new artisan just hit my radar this weekend. My favorite coffee scent is Bufflehead North York, and I also love Leviathan, so will check this out.

Thank you! Coffee scents are great, but can definitely go either way. This is a good one for sure.