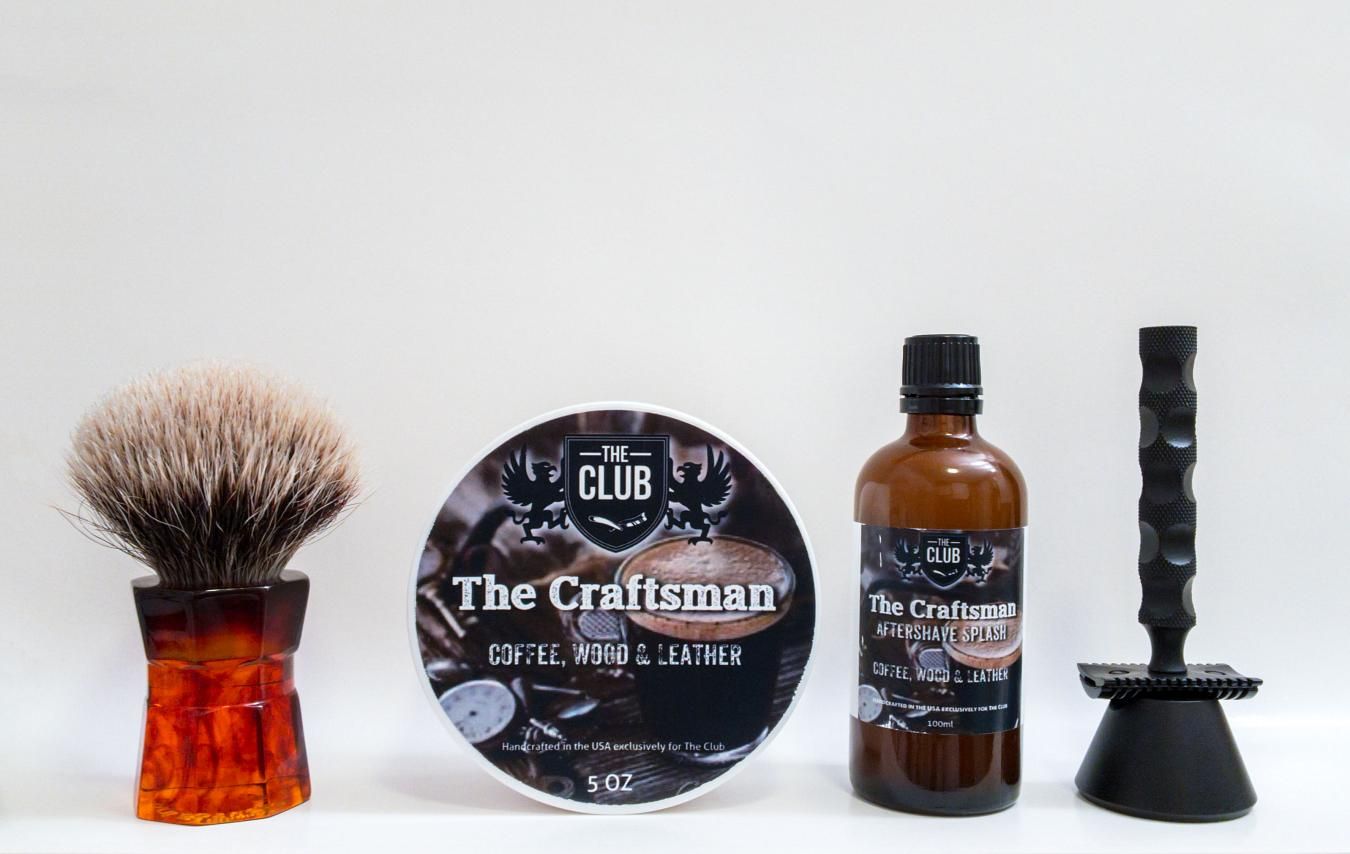 The Club "The Craftsman"

Brought to you by The Club and produced by K Shave Worx is The Craftsman in a (now discontinued) #soap and #aftershave combo.

As mentioned, this combo is produced for The Club by K Shave Worx including both the soap and aftershave. As I've done with the other The Club products, I'll lump it in with #ArianaEvans (which also includes The Shaving Shop). I suppose I should separate them at some point. As luck would have it, this software was just recently discontinued about three weeks ago. It was blown out on clearance but now it's gone; out of stock.

The scent notes for The Craftsman are simple; the notes include coffee, wood and leather. Both in the tub and the aftershave, the scent strength is robust (a hallmark of many K Shave Worx scents); you'll have no problem smelling the pungent combination within. It basically smells like you think it might. It also smells a little... Weird.

The three notes are essentially competing with each other at full volume and it's a little off-putting to be honest. The strongest note is coffee, followed by the wood and finally, the leather. Thankfully, as it dries down, it begins to smell better. The cacophony of notes settle down as the leather peaks and where it mostly remains, with coffee and wood undertones. Longevity is only about 4 hours thankfully. I'm afraid this one's a miss, in my opinion. It's just not a great blend that travels the tiers of the scent pyramid; there's no complexity or depth - it's full-on and then it's just an odd leathery thing.

To be fair, coffee is very hard to pull off... And this scent is no Barrister and Mann Leviathan nor is it Storybook Soapworks Coffee Spoons which are two of my favorite coffee-inspired scents. Thankfully, there are "literally a gajillion" coffee inspired scents and It's Always Coffee Season! Finding something to fit your tastes should be possible.

The performance is like any other #KShaveWorx product; lather that benefits from heavier loading to produce ample amounts of cushioning lather that exhibits excellent primary and secondary slickness with a decent post-shave face feel. Best to add water a little at a time to nail the sweet spot. The aftershave is a bit of a switch up; not quite their witch hazel based - nor their alcohol based - but somewhere in between. Perhaps a custom blend, as I did check my older releases and they don't match up either. The ingredients, just to be complete. First this one, followed by their current witch hazel formula:

Hardware for today consisted of a fitting #Yaqi Matte Black Mellon Safety Razor Head atop a The Shaving Shop handle from The Assassin razor, fit with a #Feather blade on shave two. The Yaqi brush is called the Moka Express with a sweet 26mm two-band badger knot (same as that from Maggard Razors). Finally, the #GTP scuttle brings up the rear.

When I saw the description of this combo, my curiosity was piqued - how can it not be - with notes of coffee, wood and leather. Alas, initially, it's not that enticing. On dry down, like a 9th inning grand slam - it's saved by settling down on a base of leather with some coffee and wood undertones. Definitely a cooler weather scent... But personally, and I hate to say it - I'm not a fan of this one.