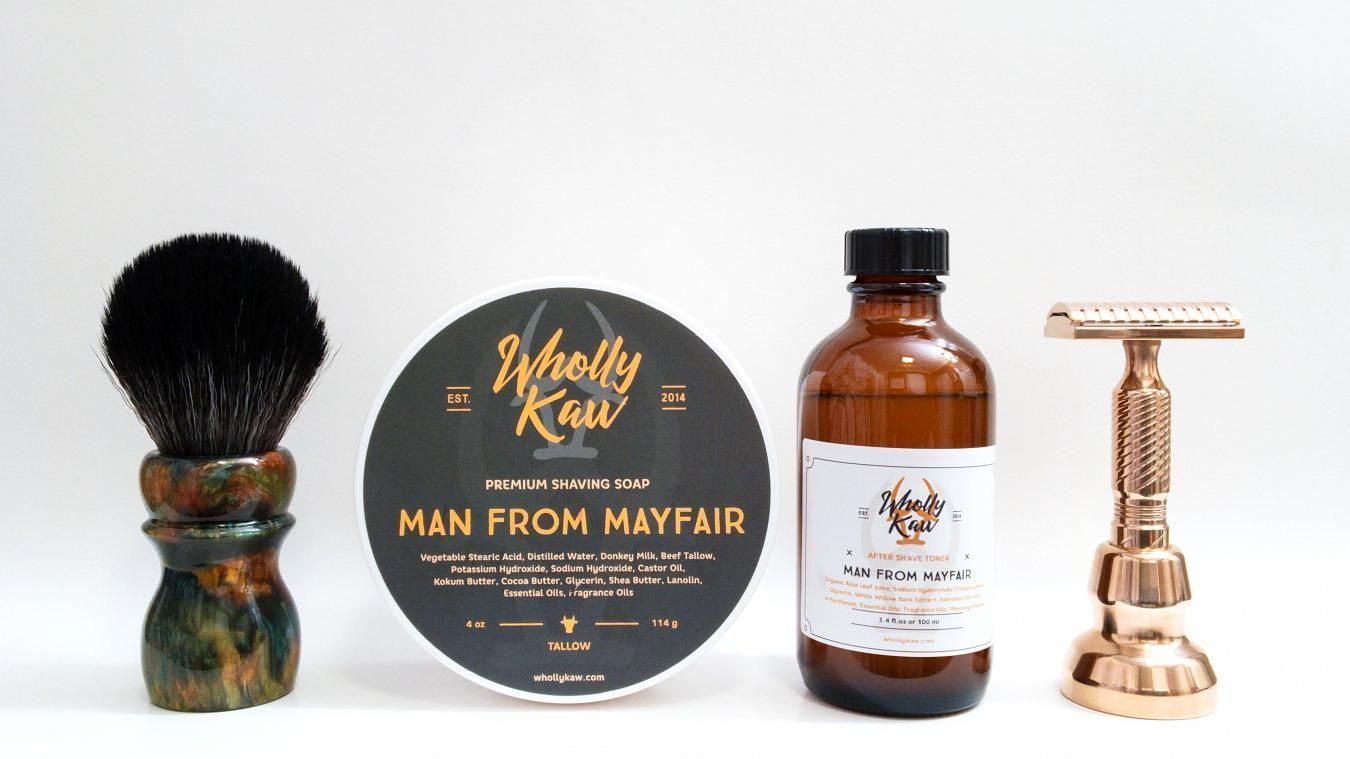 Take a stroll on High Street with Wholly Kaw Man from Mayfair in a #soap and #aftershave combo that evokes a discerning, quality "barbershop scent" upon the nose.

Man from Mayfair is for discerning gentleman who cares for finer things in life – custom shirts, custom suits, shoes, ties, watches, grooming products, perfumes i.e. everything a man needs to be sharp and dapper.

I've reviewed several of the latest "donkey milk" releases from #WhollyKaw (click the hashtag to browse them) so I won't get into performance today. I'm of the opinion that it's arguably among the best bases on the market right now. It's a fairly "hard" soap, so easy to load and drama-free, has excellent performance in terms of lather generation, cushion, both primary and residual slickness and finishes off with a great face feel. The aftershave toner, which I used today - is also a treat for the skin as it feels calm and refreshed, with a "dry" (not tacky) and silky feel, without the alcohol shock of the splash.

Officially, the scent notes include bergamot, basil, lavender, sandalwood, patchouli, oakmoss, musk and powdery notes. The scent initially evokes that sort of "barbershop vibe" in that it's both citrusy and powdery, but mans up with surrounding notes of sandalwood, patchouli, oakmoss and musk. It's at once complex, yet understated and decidedly more highbrow than your typical barbershop scent. It has an air of gentlemanly British influence.

After the initial citrus open, tempered by the herbal basil and floral lavender, the sandalwood and musk play in the middle. As the scent further dries down, the patchouli takes hold with its distinct earthiness, balanced nicely with the green of the oakmoss - while the muskiness introduced in the middle underlines them both. I really like this scent. The scent strength of both the soap and the toner is a healthy medium. The sillage of the toner is a stronger medium (settling down fairly quickly) with a longevity of 6+ hours.

Hardware for today consisted of the #TimelessRazor #TRBR38 bronze razor which was just cleaned and fitted with a fresh #PolSilver. I was so sorely tempted to give it a nice polishing, but the patina is developing nicely - albeit at a slow rate. It's mostly evidenced by the darker coloration of the bronze overall, though there are darker brown areas within the head and stand, where water might remain as it dries... A teasing look at what it might all eventually look like (though it looks brilliant polished as well). The #LowbornSupply brush loaded and lathered readily in the #GTP scuttle.

I'm a fan of the relatively vague "barbershop scent" genre. It varies on the country of origin (e.g. Spain or Italy, America...) on the unique notes, but there's usually some citrus and powder involved in these accords. Naturally, everybody has their own spin on it as well. Let's just say you'll get the vibe here, yet be impressed with how it's dressed up. Man from Mayfair is a barbershop scent, but an elegant one at that. It has a hint of sophistication, yet is subtle on dry down and sticks to the ribs for a good part of the day. Nicely done!