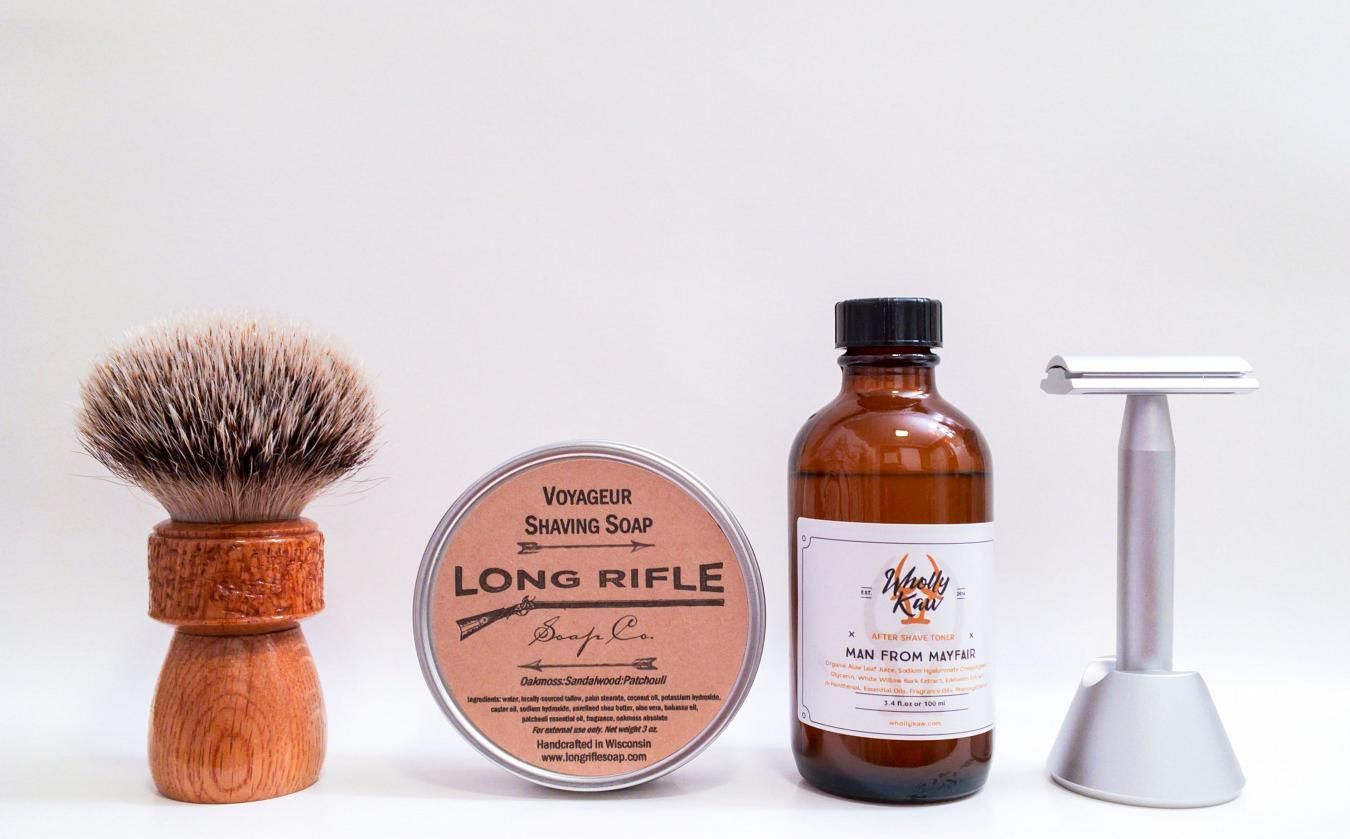 It's always fun to check out a new artisan, and today we have a soap by Long Rifle Soap Company that's called Voyageur in the 3oz. puck size (it's also available in a 6oz container pours). The scent of Voyageur contains three (lovely) notes of oakmoss, sandalwood and patchouli. Since I didn't get a matching aftershave, I resorted to this site's very powerful search and plugged in the notes. Out came a couple of contenders but the closest match was Wholly Kaw Man from Mayfair which has bergamot, basil, lavender, sandalwood, patchouli, oakmoss, musk and powdery notes. Since I already did an in-depth review of Man from Mayfair previously, I won't cover that here.

#LongRifleSoap is an artisan soap company based in Wisconsin and specializes in unique grooming products. They make natural soaps in small batches, using unrefined shea butter and locally-sourced tallow. Their branding is consistent, fitting and rather nicely done. Their soap even has the logo pressed into the top of the puck (like Tallow + Steel did on their previous generation soaps). The labels are brown paper and printed; not waterproof - but not overly sensitive either. Unlike the 6oz. container poured soaps, the 3oz. size reviewed today is made in a long, round mold and cut into pucks. As such, it's a bit smaller than the tin and sits loose. This made lathering a bit messier than even regular tins that were poured... Certainly not a show stopper for me, but some might see it that way. In that case, consider the 6oz. size. The price on the 3oz. puck is attractive at $10, and the 6oz. for $18 - making it a good value.

The soap lathered quite easily and made abundant lather that was semi-fluffy, with good primary/residual slickness and good face feel. The lather held up well in the scuttle. The nearest analog might be K Shave Worx soaps. The formulas are similar, but there are some differences. Let's take a look at the ingredients:

The scent strength was light - somewhat similar to Cold River Soap Works in that regard; perhaps a touch stronger. The quality of the scent was very nice and I enjoyed Voyageur particularly because the notes are some of my favorites. Without a matching aftershave I can't speak of the sillage or longevity, but it hung around on my skin for a spell. The Man from Mayfair aftershave I did use made for a nice combo that worked well together.

Hardware for today included the raw (aluminum) #StandardRazors with a #PolSilver blade on shave three. Odd that I haven't used it since February 16, 2018! The #GTP scuttle did it's thing. Now for the brush... Made by James Ortega, a.k.a. #ShaveBrushJimmy - the brush is made from the oak of the The Shawshank Redemption tree! Perhaps one of the most iconic trees in film history.

The oak appears near the end of The Shawshank Redemption when Red (played by Morgan Freeman) follows clues left by Andy Dufresne (played by Tim Robbins). You may recall that on July 29, 2011, half of the tree fell due to trunk rot from ants after being hit by lightning. The tree was further damaged in July 2016 due to strong winds. Finally, what was left was cut down on April 9, 2017. Naturally, the oak started showing up as collector's items and was also available for purchase in chunks... And that's where this brush came from!

It's marked #2 out of 20 (IIRC) and contains a 22mm silvertip badger knot. The finish on the oak is natural, but with a coat of polyurethane to protect it. My only gripe is that the finish wasn't rubbed out, and there are a few rough/high spots. This should have been a little better. The detail in the band is a little puzzling also... But it works pretty well. The brush came with a Certificate of Authenticity signed by the property owner (Dan Dees) and the artisan (James Ortega), marked SBJ-2. On the bubble wrap baggie it came in was a sticker with one of a million great movie quotes:

I'd like to think that the last thing that went through his head, other than that bullet, was to wonder how the hell Andy Dufresne ever got the best of him.

A nice shave today with a new artisan in the den. The soap performed nicely and the scent equally so. If the scents catch your eye, rest assured that you'll get a fine soap.