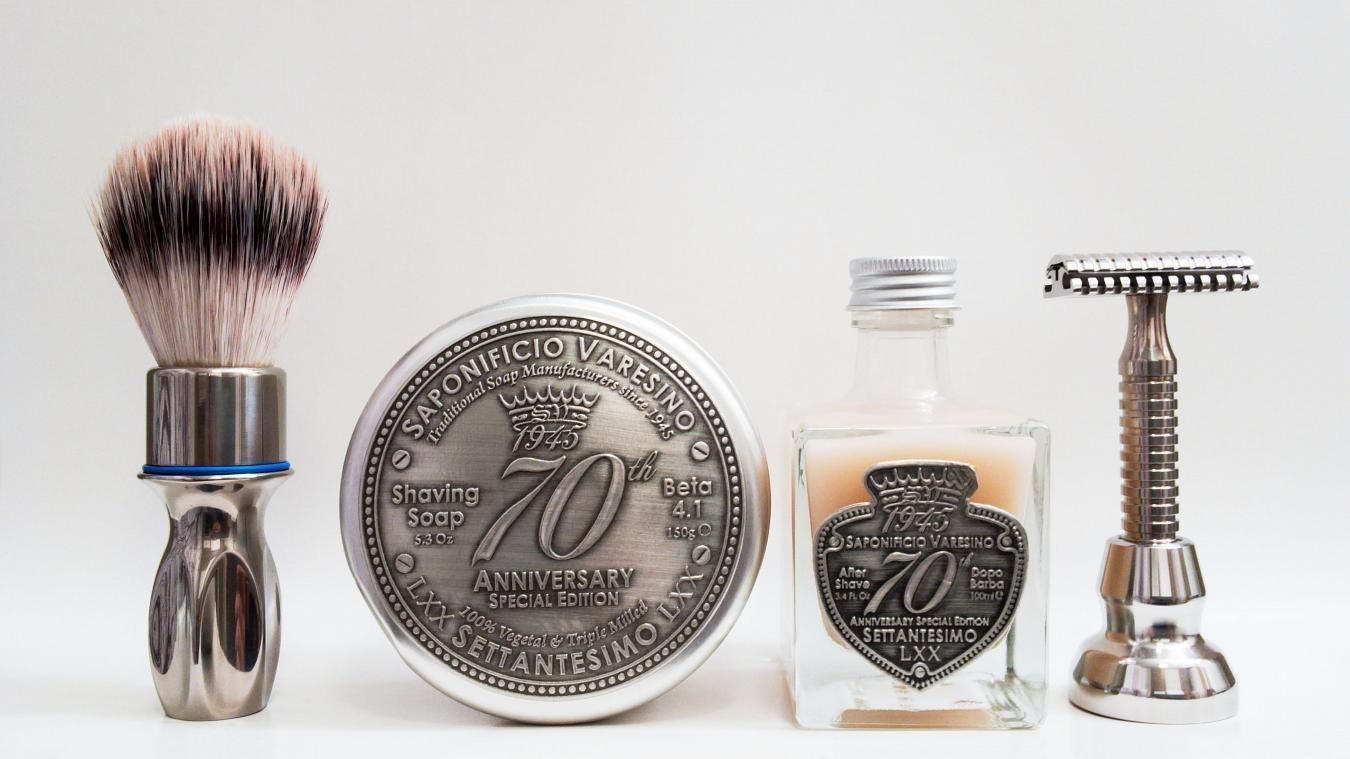 A lather that literally made me say "wow" the first time I used it (and at least made me think it every time thereafter) is Saponificio Varesino in this Special Edition 70th Anniversary #soap and #aftershave!

Special Edition Shaving Soap made to celebrate the 70th Anniversary of Saponificio Varesino. This shaving soap is different from the previous three we made (Aromatic Fern, Dolomiti, Manna di Sicilia), since the raw materials have been measured and balanced in a very different way.

I've raved about Saponificio Varesino 70th Anniversary numerous times since I first got it and reviewed it extensively nearly two years ago... It made me a hardcore fan of #SapVaresino since. Check out my most recent review of Felce Aromatica for more love. While their newer software has undergone continuous improvement (at Beta 4.3 currently) this soap continues to impress, as it always has. Fairly remarkable and plentiful lather, with excellent cushion and glide. The scent has a high-end Italian cologne vibe which layers perfectly with Giorgio Armani Acqua di Gio. So that's what I did today (as I usually do) with the #EdT and #deo.

Besides the continued evolution of the software, is that of the packaging. While that of the 70th Anniversary looks really nice, the execution was a little... Flimsy. They've been experimenting along the way and it seems they've settled on nice aluminum containers for both the soap and aftershave, at least for Limited Edition (re)releases of the former and all of the latter. Less prone to damage, no special soap container needed and no leaking of the aftershave (this particular edition's bottle doesn't leak).

Speaking of aftershave, this stuff (as with all of their aftershaves) is amazing. It's more viscous than you might expect, and gives the performance of a balm. It's not at all greasy, heavy or tacky. The healing and moisturizing properties are top tier and the resulting face feel is exquisite. My only gripe is that Saponificio Varesino doesn't make any EdT of their own to keep the scent going all day. That said, scent strength is fairly strong but longevity only about two hours or so.

Interestingly, being in a clear bottle you can readily see the separation of ingredients of the aftershave, which needs a good agitation before use, if not regularly... As there was a batch that would not recombine. If yours is one of those affected, contact Saponificio Varesino for a replacement.

With a solid four days of lazy growth to mow down, the hardware for today was a no-brainer, and consisted of my custom #TimelessRazor in the "aggressive edition" with a fresh #PolSilver blade. I liked the Gillette blade, but this one remains my favorite and I'm glad to be back. Silly smooth and comfortable, yet as efficient as you could possibly want. After the first pass, just about all the beard was gone. The second pass got any strays, while the third (and being truly optional) just took it to the next level... A BBS shave with ease and the resulting skin feel of the Saponificio Varesino software just put today's shave over the top in every way. The #BSB Shaving Brush made sweet, sweet love with the lather in the #GTP scuttle, which kept it sublimely warm. If ever there was a lather that deserved a scuttle, this is it.

Everything about today's shave was textbook perfection. Seriously, I was left in want of nothing. This is as good as it gets. If you haven't tried Saponificio Varesino then you really owe it to yourself to give it a go. All of the soaps and aftershaves perform similarly, so you're not missing out by having an older formula. Go with whatever scent sounds good - but to be honest, they all do - and are...