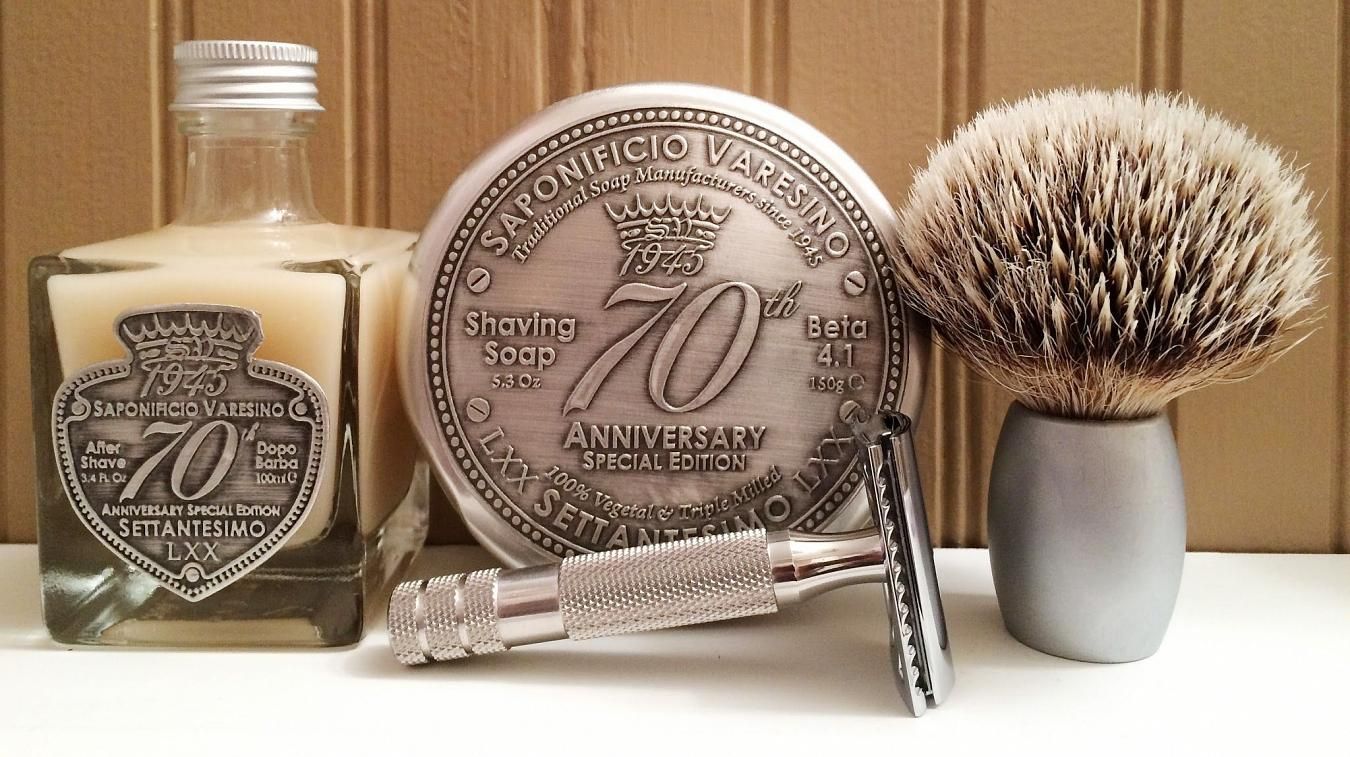 Long and short of it... This SOTD was basically like, OMG - this may be number one! Saponificio Varesino 70th Anniversary #soap and #aftershave...

I preface this by saying this is my first shave with this pair, and I'll need to give it another go to be complete... As I had just come in from being in the pool and covered head-to-toe in Hawaiian Tropic Dark Tanning Oil (SPF 0 for you nancies). I believe it affected the slickness.

That out of the way - like I said - OMG! This may be the finest lather I've ever put to my face. Seriously. Normal loading time and water. What developed in the #GTP scuttle was nothing short of inspiring... A deliciously dense, creamy lather... But that scent! This stuff smells amazing. I'll know for sure on Monday, but yes - I believe it's very Acqua di Gio flavored.

So yeah, I applied the lather with my #Dovo silvertip badger brush and like Shark Tank did in his video, I said, "wow." It was the softest feeling, most plush lather you could imagine - and it just got better with each swipe. Great coverage, insane cushion. Though as I said, I suspect the suntan oil affected slickness, as my skin was a bit sticky.

Another note is my relatively new #Mühle #R89 razor. With five shaves on the #PolSilver blade from the past week, I cleaned it up real nice and popped in a fresh #Feather blade. With the help of the lather, I don't believe I've had a finer shave - this was easily in the top five. Effortless, super smooth BBS shave.

The aftershave/balm looks like the latter, but has a consistency more towards the former. Think of it as a milky liquid. The scent is the same as the soap, a tad stronger. Both are very strong. The resulting face feel was unlike anything I've had before... Supremely moisturizing and just exquisite. Unfortunately, the scent didn't last more than an hour or two... So you'll want to go ahead and use a high-end cologne. The aforementioned AdG or Geir Ness would be a good choice - and my plan for Tuesday morning.

So to wrap up... OMG! If you want what is probably the best soap to be coming out of Italy right now, if not anywhere - you really should try #SapVaresino 70th Anniversary soap and aftershave. This stuff is la bomba!

See also my second shave with SV70 for more info!