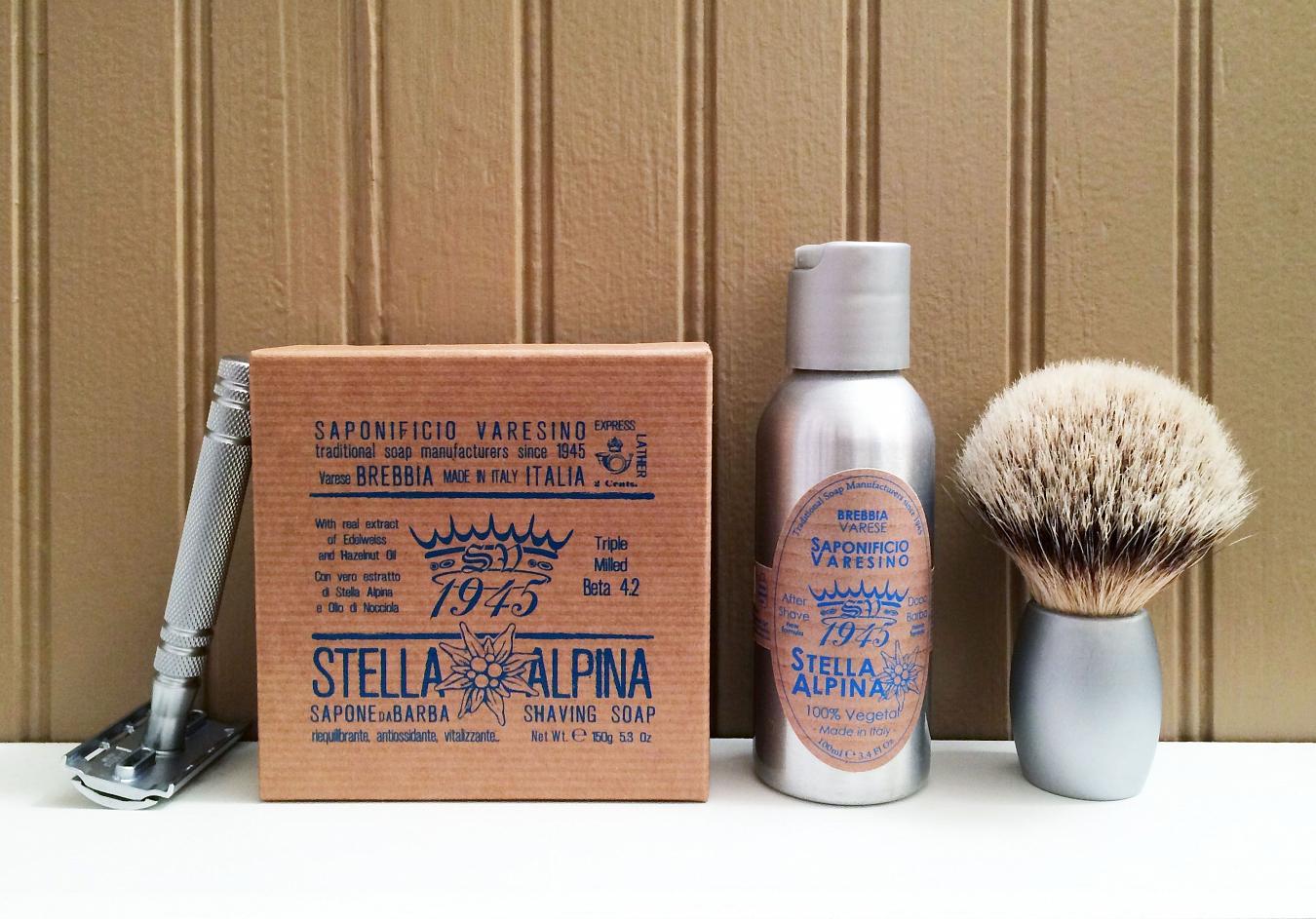 I mentioned it was coming and now it's here for a SOTD revew... The Saponificio Varesino Stella Alpina #soap and #aftershave combo!

I've long maintained that #SapVaresino makes some of the best software in the world available today, and the latest, Stella Alpina - is no exception. In fact, it marks continued development of both the soap and the aftershave. The name itself, Stella Alpina (Edelweiss) is appropriate. It's similar to the prior Cosmo release in the newest Beta 4.2 formulation (which I reviewed extensively before) but adds (among other ingredients) Edelweiss Extract (Leontopodium Alpinum) and Hazelnut Oil (Corylus Avellana). The feel of the lather is really plush on your face; just like the first time I used a Saponificio Varesino soap, I still think, "wow." Performance was unsurprisingly excellent; ample amounts of creamy, yogurty lather that's deeply cushioning with excellent glide and secondary lubricity. The ingredients are vegan, and both amazing and numerous; nobody else does it like this:

The aftershave, as expected, is also excellent. Again, it performs similar to Cosmo - but also takes it up a notch in this release. Starting with the packaging, it is traditional, rather than the more unique Cosmo and 70th Anniversary packaging. But it too has evolved; the container is a heavier gauge of aluminum, the label more professional. Leaks have finally been resolved it would seem. The aftershave itself feels a bit more viscous; it required a good shaking to dispense into my palm. It's less tacky, even if used in a higher amount - in fact, it feels more silky, instead. At any rate, the post shave is so very Saponificio Varesino - absolutely top notch... It left my face feeling soft, supple, very moisturized - yet silky. The ingredients, like the soap, are just as amazing as the soap:

As for the scent, the strength is just shy of strong in the soap but definitely so in the aftershave. It has top notes of lemon, bergamot and basil, middle notes of cistus, myrtle and eucalyptus and base notes of cypress and amber. Duration is a good 3-4 hours, easily the longest lasting of the Saponificio Varesino scents. Which is a good thing, because it smells truly refined and classy. The top is a slightly bitter citrus with a hint of peppery, green basil while the middle is more floral and camphorous thanks to the cistus and myrtle - the latter blending beautifully with the eucalyptus. The base, thanks to the cypress, is decidedly woodsy with a touch of powdery amber. Overall, you can say it's woodsy, floral and herbaceous. This scent may also be one of the best in the entire line up, challenging my long time favorite, 70th Anniversary. They really knocked it out of the park on this one. If they sold a cologne or EdT I think they would make a fortune; I'd certainly buy many of them.

Hardware for today included the matching finishes of my newly cleaned razor the #Feather AS-D2 (with a fresh #PolSilver blade) and also newly conditioned brush the #Dovo silvertip badger. The AS-D2 is exceptionally mild, providing an effortless near-BBS result since I've taken to shimming it (and even more so with the usually fitted Feather blade). I love my synthetic brushes, but when it comes to that truly plush feeling, it's hard to beat a silvertip badger. Combined with the lather it's just remarkable. The #GTP scuttle kept the lather nice and warm.

In retrospect, I probably say this with every release of theirs, but I'm just blown away by Stella Alpina as it's just good. Damn good. They continue to improve and evolve their products; both in composition/performance and packaging. This one is no exception. If you're a fan of Saponificio Varesino (and you should be) you should give this one some consideration. Not just another new scent, but the pinnacle of their development efforts. I'd truly be surprised if there was anything better out there - I certainly haven't found it (and I've used a lot of software).

Will be placing an order for some SV software after the holiday, good way to start the new year. May I ask how you are using/storing the puck? SV wooden bowl?

Nice! You won't be disappointed. My Cosmo and 70th have their own containers, but the Stella Alpina and Tundra Artica rotate in the (now discontinued) alder wood bowl. I'll probably pick up some normal tubs to put the pucks in. Though they do have their own (thin) plastic surround to make swapping out easy in the SV offerings - which really, are quite inexpensive for what you're getting.