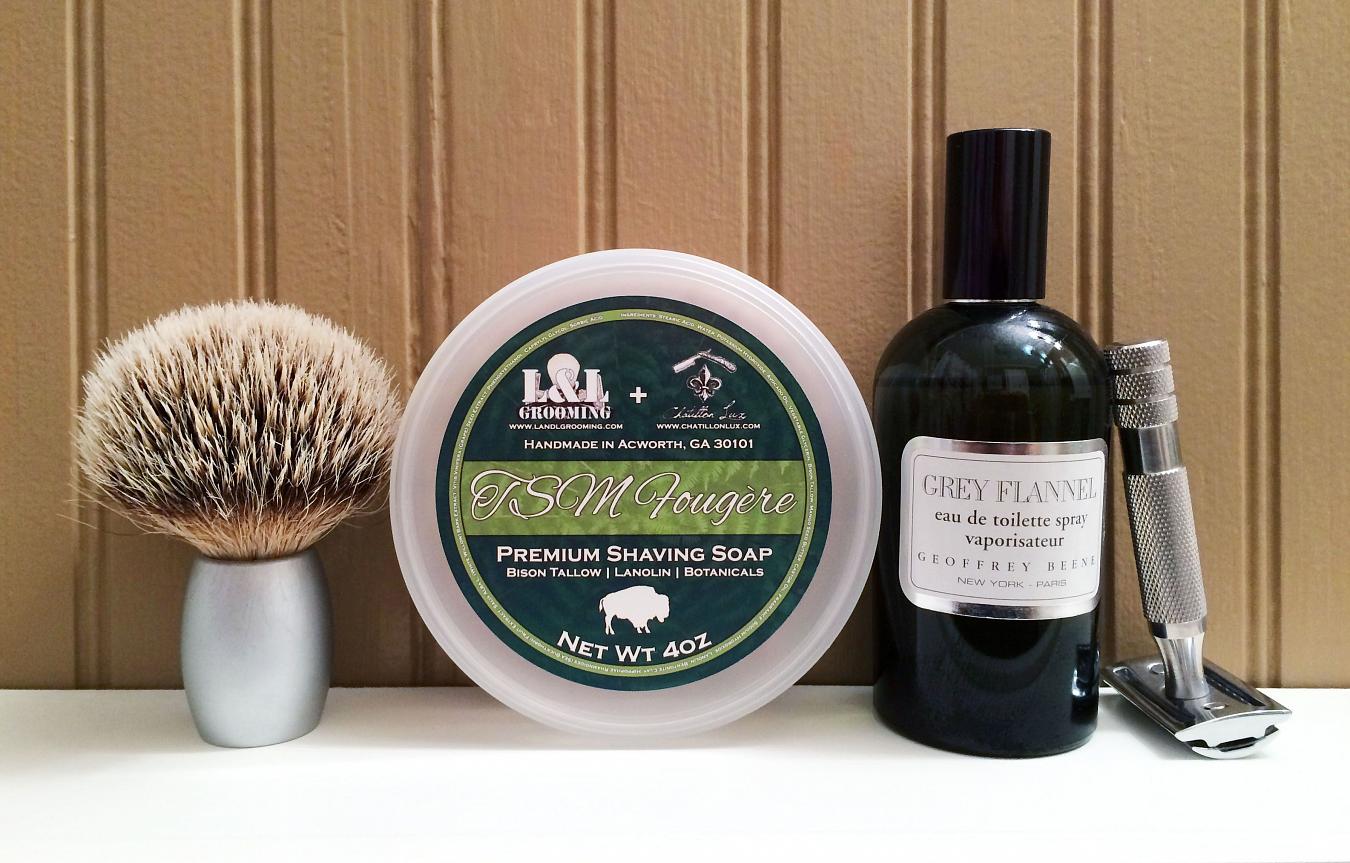 Today's SOTD is all about the green, green notes of fougéres by way of L&L Grooming TSM Fougére #soap and Geoffrey Beene Grey Flannel #aftershave and #EdT!

I won't get into the performance of #landlgrooming soaps - if you click on that hashtag, you'll see quite a few other reviews I've done of it, most of them quite recently. Long story short, it offers top-tier performance both during the shave as well as resulting post-shave face feel. It's truly a very good soap. So let's talk about the scent here. It's a collaboration between Chatillon Lux and L&L Grooming (thus both logos are on the label) with the former providing the aftershave (or toner/salve/EdT) and essentially the fragrance - for the latter, which makes the soap. Similar to the Champs de Levande collaboration between the two. It was produced for the Facebook group The Shave Market (and thus the "TSM" part of the name). It was then decided that it would be publicly available as of October 3, 2016 (funny how that can backfire) - so here we are today!

Officially, the scent is described as having notes of oakmoss, incense, lavender, vetiver, neroli, tonka bean, petitgrain, nagarmotha, clary sage, cedarwood, grass, musk, bergamot, grapefruit, Spanish moss, violet, geranium, violet leaf and anise. Wow. Got all that? It's essentially meant as "a bright take on fougére" and it definitely delivers the green. Judging by the list of notes, you can imagine it's a rather complex scent; a hallmark of - and a testament to - Scott at Chatillon Lux. I can't say I get every note, but you definitely get the oakmoss, vetiver, grass and Spanish moss providing layers and layers of green with a woodsy undertone thanks to the nagarmotha, clary sage and cedarwood. You also get a bit of a twang and bitterness from the citrus notes of neroli, petitgrain, bergamot and grapefuit. There's also a slightly floral vibe to it. It truly smells like you're in a heavily wooded area with flowers bursting forth as in the spring - with maybe a citrus orchard in the distance. The incense note add a strong, deep component overall while the hint of anise round it out. It's easy to just call it "immensely green" but there's so much going on here. As far as fougére scents go, this one is deep, luscious and complex. The scent strength is also quite strong, though it mellows when lathered somewhat. Really nice. You might wonder about the prices of both the soap and aftershave products; it's higher than normal due to both the quality and quantity of components.

I don't have any of the matching #chatillonlux aftershave products, so I had to make due with a fragrance from days past (circa 1970s)... None other than Grey Flannel. It's technically more of an oriental wood than a fougére fragrance, but the notes aren't out of line. It has top notes of galbanum, neroli, petitgrain, bergamot and lemon; middle notes of mimosa, iris, violet, sage, rose, geranium and narcissus and base notes of tonka bean, almond, oakmoss, vetiver and cedar. So lots of the same bitter citrus, a bunch of woodsy notes, floral and even green notes. Honestly, I find it a good stand in for the proper, matching aftershave. I've reviewed Grey Flannel a bit more in-depth previously, so check that out for more info. It's dirt cheap at $15 for the set of aftershave and EdT and while it won't win any awards for post-shave face feel, paired with a nice soap it does alright. The scent itself is quite tenacious as well, lasting all day easily (and more so on clothing).

Hardware today consisted of the #Mühle #R89 razor with a #PolSilver on shave three while the #Dovo silvertip badger brush did what it does best with the lather in the #GTP scuttle. I actually use my natural hair brushes less and less these days. I never thought I'd say that, but synthetics really have come a long way from even just a couple of years ago.

If you're on the fence about spending $25 for a tub of fougére soap, that's perfectly understandable. Not to mention another $12-30 for a matching aftershave product. But certain scents can become quite expensive depending on the components and the quality of them. The offerings from Barrister and Mann such as Fougére Aromatique and Fougére Imperiale were no different - and why they're no longer produced. It just got too expensive. This soap, with its performance and scent quality - easily joins the other two as top-tier fougére software. If you're a fan of The Green, you'd be remiss - in missing this one. Get yourself a set and enjoy it!