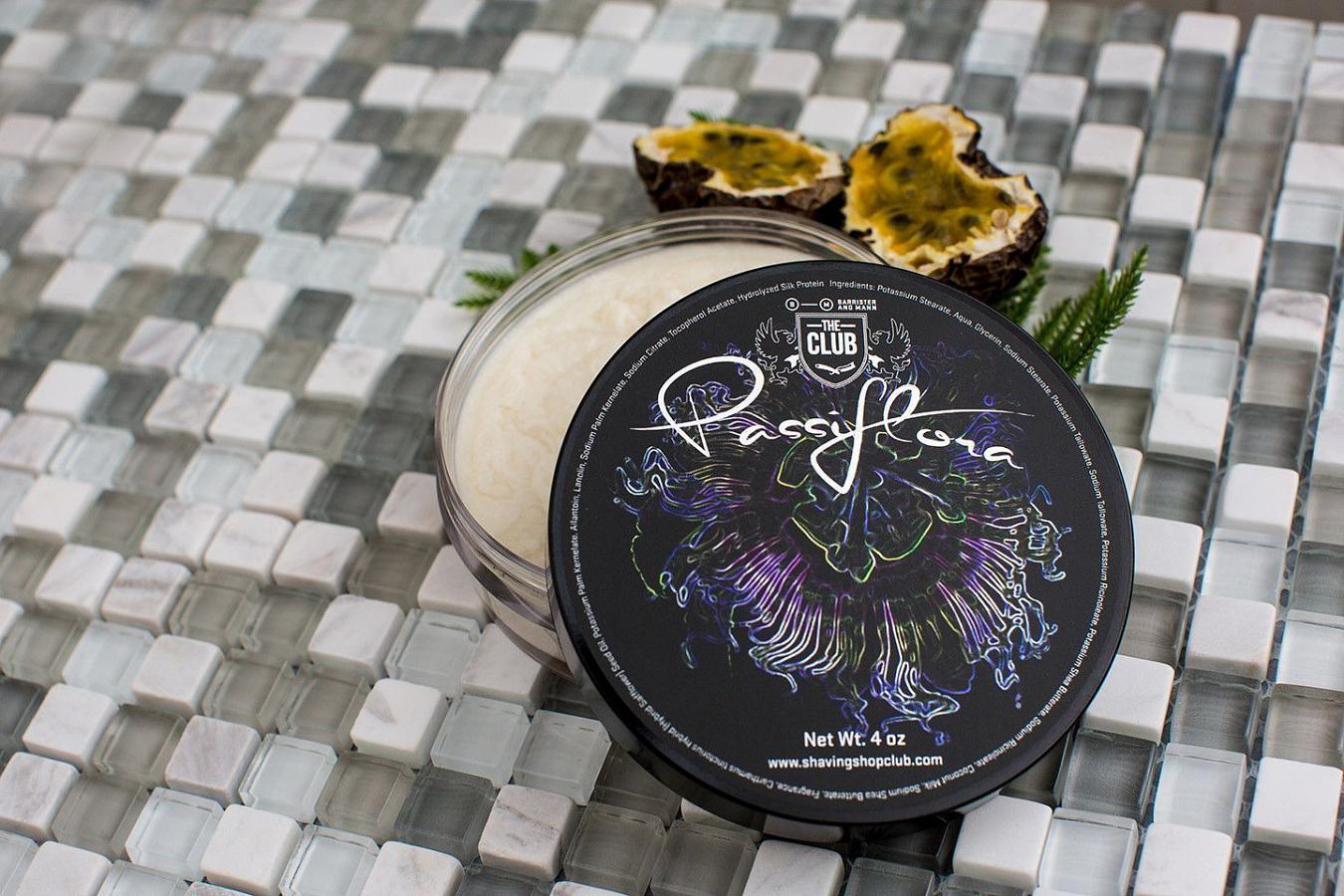 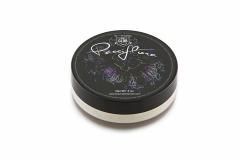 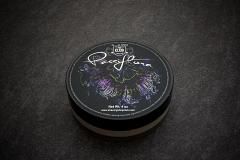 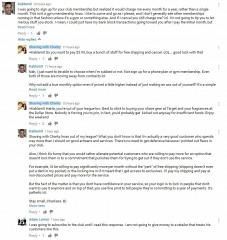 Another week, another shaving #drama. This time it's centered around a soap-only release from Barrister and Mann called Passiflora - the rub being that it was to be offered exclusively to the Shaving Shop Club membership. In principle, it sounds as though it should've gone as planned. But of course you know that's never a given... Little did we know what would go down as another infamous implosion.

Let's start by talking about the soap itself, Passiflora. It was quietly announced at first and features notes of passion fruit, galbanum, cinnamon, bergamot, rose, geranium, lavender, and tonka bean. Basically billed as a "spicy pomegranate fougére" thusly:

It has come to the attention of we at Barrister and Mann that “fruity” fragrances are not known to be masculine, manly, or otherwise appropriately burly enough for proper wet shaving.

Guess what, guys? Time for an upgrade.

Introducing Passiflora, an elegant, sophisticated, spicy fougère that plays on the green soapiness of galbanum oil. This unusual inclusion is buttressed with cinnamon, bergamot, rose, geranium, lavender, and tonka bean, and overlaid with the rich, tangy, slightly acidic edge of a truly fine passion fruit accord. Scintillating and distinguished, Passiflora is a modern fragrance for the modern man.

It’s time that fruit had its due.

So far, so good. Part deux is that the (new) Shaving Shop Club would sell it exclusively to members as of Monday, November 14th... Which meant signing up for a yearly membership according to level; silver, gold or diamond. The first two, really, are identical. It's $39.95 for a year (gold) but can be paid for in monthly installments (silver) instead of a one-time lump sum. What wasn't clear enough, or at least a few didn't read - was the fine print, "plans cancelled before the end of 12 months will be billed at a prorated amount for the balance of the months remaining." So you have two camps; those complaining that this release was "behind a paywall" and those that signed up, thinking they could jump on the bandwagon for $3.95 and then bail.

But it gets weirder. In Joe of Italian Barber style in a Youtube video comment, someone had brought up the issue of membership, which Peter responded to with the following - naturally, it was not well received - less so the abruptness of a follow-up comment...

So you want to pay $3.95, buy a bunch of stuff for free shipping and cancel. LOL....good luck with that

HaHa, you're out of your league bro. Best to stick to buying your shave gear at Target and your fragrances at the Dollar Store. Nobody is forcing you to join, in fact, you'd probably get kicked out of anyway for insufficient funds. Enjoy the weekend

Next up, we get to Reddit, where someone started the thread "Those of you interested in the upcoming B&M scent " (along with a thread on DFS if not more elsewhere) and you can probably guess what came next. A bit of back and forth over the whole membership model, people taking sides here and there - and more.

Anyway, after the initial batch went on sale and promptly sold out, even more people got pissed that they missed out... Perhaps not realizing that it would be a regular offering (and not explained as such). Pile on all the people complaining about the pros and cons of membership with some even suggesting this was a membership grab... It was decided (with Will suggesting and Peter agreeing) that in order to save face, the soap would then be made publicly available through the Shaving Shop online. Sounded like a good plan, right?

Naturally, that pissed off even more people, especially those that had just signed up for membership to get the soap, or expected a certain amount of exclusivity. So it never happened. Instead, it came to a head (finally) on Thursday, November 17th and it was more or less "mutually decided" that Barrister and Mann and the Shaving Shop Club would "make a clean break" and all remaining 108 (out of 150) tubs of Passiflora would be liquidated, at cost, for $12/tub on the B&M site. This was announced on Reddit as well as on Facebook. Of course, it goes without saying that it sold out in record time (less than half an hour, in fact).

People are being refunded membership dues paid, people are also being refunded money spent on the soaps via the club... Will is not making any money on the liquidation (which would then add insult to Peter)... So basically, both companies, customers and standers-by are all left a bit dazed. The only people that really made out are those that scored a tub of this unobtainium for $12. Which guaranteed, you will see pop up on every buy and sell forum out there - in fact, it actually began before it even went on sale. We put the soap in our History of Barrister and Mann so that it may be recorded in all its infamy.

I should make abundantly clear here - that none of this is the fault of Will, who did the best he could under the circumstances. It was just "one of those things" that didn't go as planned. Peter closed the doors on this offering and is refunding those affected. Will cut his losses and cleared out the remaining stock (never to see the light of day again). The original intent was okay; it was meant to be an exclusive offering. The follow-up intent to open it up to everyone was also meant well. What started it essentially revolved around membership in a new, unproven club - and some wayward comments by the owner. Let's hope it didn't doom it before it even began.

And that, ladies and gentlemen, is how the latest B&M unobtainium was born! In only three days.

If I can put my two cents here. I agree and things could have been done differently. However, Will is a young man, incredibly talented and bright. His mother Paula is a lovely lady. However, with age comes experience in handling situations the arise that may take you off your game. Will has a loyal following on Reddit that flipped out because of two things 1- He made me an exclusive and 2- the fact that they would have to join and commit to becoming a member in order to buy Passiflora. They chose to bash me personally and my business model (a couple of these guys are resellers). In defense of Will, he is very protective of his business, in which they have worked so hard to build. In the rush to stamp out the Reddit chatter (it was only about 20 people), he decided it needed to be sold in my other store, which meant it would no longer be an exclusive. I had reluctantly agreed (knowing it was a bad move). This was my mistake and I own up to it. After thinking about it, I made the decision that I cannot do this. They were now being attacked for no longer making the soap as an exclusive. I had Members that were not attacking me, but not happy about this, as some made the decision to join because of this soap. We were all behind a rock and a hard place. I made the decision that it needed to end. B&M was taken off the site and I didn't add Passiflora to The Shaving Shop. I'll suffer the consequences that come my way and deal with it. I've had a few people ask to leave and I took them off. I've said this before and I'll say it again, I work hard because I like to work. I have these businesses because I love this hobby and enjoy the creativity aspect of owning the businesses and coming up with ideas that are a bit out of the box. If not having B&M hurts the business, then so be it. It started to no longer be fun and I can't have a situation dictate how I run my business. So, this is the truth. I believe this has already blown over, it has settled down and it's over. Will and Paula tried to help me and for that I'm very appreciative. We didn't expect there would be blowback. Decisions could have been made differently, but you learn from mistakes and move on. Will will be fine because they have a great company, they make great soaps and care deeply about their image and customers. This was just a bump in the road. As I said in my video to our Club Members...today is better than yesterday and tomorrow will be better than today. Have a great day everyone. To you Reddit guys, I know who you are and it's all good. I don't give a fuck what you think. Enjoy the day.

Okay, so hopefully the last update here. The dust seems to have settled and here's where we are today...

Okay, I lied. One more quick update. Just got my Passiflora mailcall... And it smells incredible. I'd like to "thank" those that caused its premature demise... You know who you are.

Here's a full review of Barrister and Mann Passiflora to satisfy your curiosity.