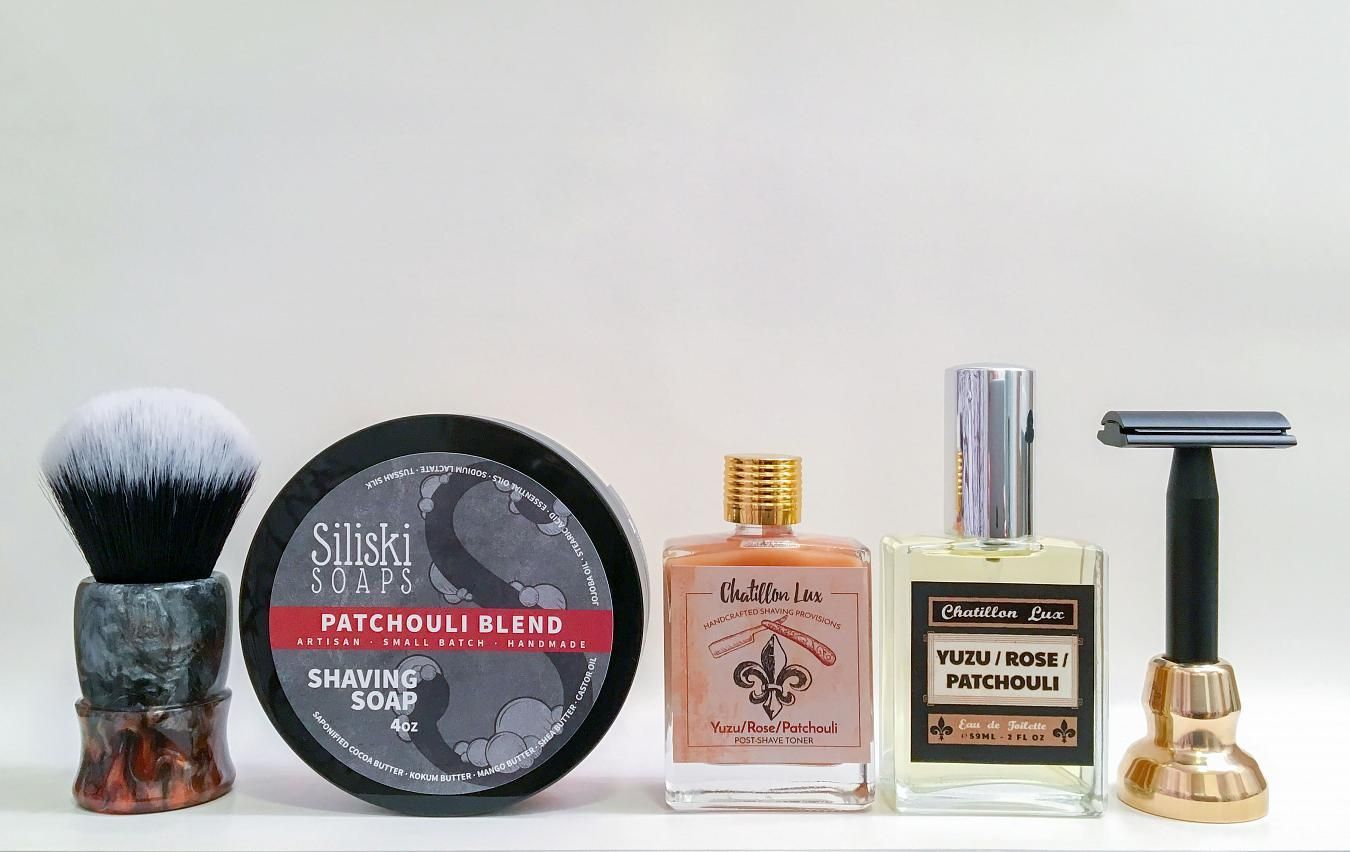 Checking out a relatively "under the radar" artisan called Siliski Soaps and their #soap scent called Patchouli Blend - chased with the amazing Chatillon Lux Yuzu/Rose/Patchouli #aftershave and #EdT duo.

Many people have a love/hate relationship with patchouli, but you will love ours. We mixed dark patchouli with culinary and woodsy herbs creating a sweet and deep, yet very approachable scent.

New to the den is Siliski Soaps and up for scrutiny today is the Patchouli Blend soap. There's a matching aftershave available, which I do not have. So we're chasing this puppy with Yuzu/Rose/Patchouli aftershave and EdT by #ChatillonLux. The artisan himself is Andrew Siliski, and they've been operating since March of 2017.

The branding, container and thus presentation is excellent and consistent. The background is the same artwork (their logo) across the board, with a single stripe running horizontally across in various colors, denoting the scent (on the soaps, but oddly lacking on the pre- and aftershaves). It's this consistency especially that appeals. While the tub is a fairly standard PET job, it's robust with straight sides. The labeling is clean and waterproof. Well done.

Now, about the scent of Patchouli Blend. Officially, it has notes of patchouli, basil and sage. It's a simple accord, really - but has some depth due to the somewhat opposing notes. While personally I was hoping for a more patchouli-centric accord, to me it's more of a spicy, herbaceous fragrance with a background of earthy patchouli. Between the basil and sage it has a familiar, yet unique and peppery vibe. Those that fear the patchouli need not worry - this one's pretty mellow, and works very well with the other two notes. Ideally, I like to judge a fragrance from an EdC/EdT/EdP as it's cleaner - untainted by soap bases, which can often muddy or color a scent. Unfortunately, not having the aftershave (which is my second favorite way to get a sense of the fragrance)... I can't give a more thorough description, including the tiers as it dries down. I will say that the scent strength is strong (and intense) and just how I like it! The oils used have a nice, quality feel to them.

Performance wise, it was a nice surprise and performed rather well overall. With my standard loading of 30s, it produced enough lather for three passes (though it started off a little sketchy). The benefit of using a scuttle is that you can accurately let the lather dry or add water as necessary throughout the shave. As mentioned, the initial lather build didn't seem like enough - but got better in the second pass - and really blossomed by the third. The key was adding water slowly (which is true of most soaps, really). With new artisan soaps in the den, there's always a bit of dialing in before you get it just right. Ultimately, the lather was creamy with very good primary and good secondary slickness, with an equally good post-shave feel. The lather was definitely more creamy than it was viscous, but provided plenty of cushion.

So what accounts for the face feel? Some rather top choice ingredients, almost fairly standard in the better offerings out there:

And concerning the above ingredients, they say of the soap:

The backbone of our soap comes from our use of kokum and cocoa butters. Both kokum and cocoa butter is one of the highest sources of palm free stearic acid, even more than tallow, making our soap one of the creamiest, fastest lathering soaps on the market. To perfect this unique recipe we blend Mango and shea butters with castor oil and a touch of jojoba for balance and conditioning. Then Sodium lactate, to act as a lather booster and humectant. Finally, cruelty free silk is added to further increase and improve the lather, providing a “super-slick” feel. All together this soap makes for one hell of a great shave. Conveniently packaged in a 6 oz 4" wide plastic container for easy loading and storage.

Hardware today consisted of the #StandardRazors all-black unit with a #PolSilver blade on shave three. The #TimelessRazor bronze stand made for a nice reversed appearance from that of a couple of days ago, where I review Eufros Zanzibar. The brush remains the same though, and is a sweet #LowbornSupply piece called Ember in a chubby style, featuring a fat 26mm Tuxedo knot. And you guessed it - the #GTP scuttle did the ol' needful.

A pleasant shave and a good first showing by #SiliskiSoaps today. I found that the soap performed very well overall. I would've liked to have had the matching aftershave on-hand so that I could assess its performance and more so, the overall fragrance of Patchouli Blend. With the soap running a modest $15 and the aftershave an astonishing $8 - the value is exemplary. Admittedly, the aftershave is fairly simple (five oils including the EO blend)... But Fine Accoutrements charges $20 for an even simpler one of basically alcohol, water and fragrance (plus maybe menthol). Not that that's bad, but I lean the other way and prefer toners in the summer and balms in the winter - both more rich in skin food. Regardless, $20 is unreasonable - just as $8 is amazing.