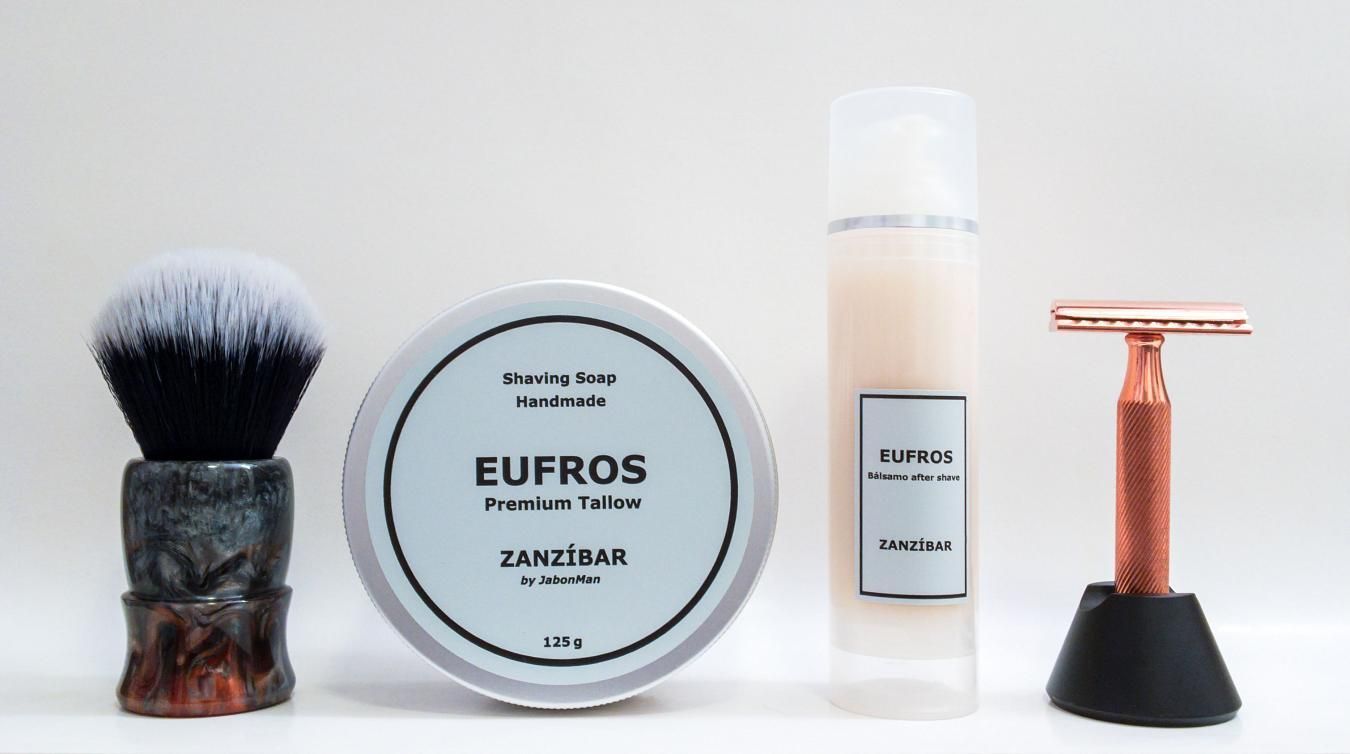 One of the latest Eufros offerings called Zanzibar in #soap and #balm form - that transports you to the markets of its namesake with an exotic and spicy scent.

I did an in-depth review of Rosas from the older Regular Line. Today's offering is the latest formula, and considered the Premium Line which I covered in an in-depth review of Dama de Noche. Check those two reviews for tons of backstory and the performance. The software is made by a (very nice) gentleman in Barcelona, Spain by the name of Manuel Garcia (a.k.a. JabonMan on the Spanish forum Foroafeitado). The soaps originally were sold by word of mouth on various forums under this name, in clear PET tubs with a simple label for the name. Later, the packaging improved with aluminum tins and better labels and the brand name became Eufros (which is seen here). In its latest incarnation, the tins and labels have improved further; on par with Wet Shaving Products (albeit in a larger tin) or prior generation Cold River Soap Works. Getting a hold of it is still essentially word of mouth, however. There's no website, no Facebook page - or any other social media for that matter. The only way to reach him is via email. Send him a note and he'll tell you what's available, what the costs are - and then you guys work out an order and payment. Pasteur Pharmacy in NYC usually keeps a decent stock of various scents, in soap and balm as does West Coast Shaving as of April of this year.

Let's talk about the scent of #Eufros Zanzibar. This is one of his newest scents (the other being Chronos). Officially, it has notes of myrrh, vanilla, grapefruit, benzoin, cinnamon and patchouli. Like Mickey Lee Soapworks Souq (with notes of tumeric, cloves, cinnamon, bay leaves, pepper, and ginger) transports you to the souqs (markets) of Bahrain, this scent will transport you to the quite similar markets of Stone Town in Zanizibar. Not surprisingly, both are well known for their spice trade.

I'll need to spend more time sniffing out the scent to suss out the scent pyramid; I didn't have enough time this morning. Suffice to say, it's an exotic blend of spices and truly fits the name. It's a bit more intense (in terms of complexity, spiciness and scent strength) than Brisa de Oriente (with similar notes of myrrh, cardamom and vanilla). Scent strength in the tub and lathered - but especially the balm - are a high medium, bordering on strong. Sillage is a fair for at least two hours and longevity comes in at about 4 hours. I followed up with #Guerlain Oud Essentiel and it was perfect and complementary.

Hardware choices today fell to the #AboveTheTie #Windsor razor with a fresh #Feather blade as I was eager to try something new. The prior PolSilver had only four shaves on it, so a bit early - by one shave, anyway. Initial impression is that there's not too much difference; the Feather didn't exhibit any of the usual first shave harshness that can manifest itself occasionally, so there's that. The brush is a sweet #LowbornSupply piece called Ember with a 26mm Tuxedo knot. The #GTP scuttle did its thing.

What can I say, really? Another fantastic shave with Eufros software! The lather of this soap is just amazing. It's so creamy and plush with excellent pro- and post-shave properties. The balm is no slouch either. Hopefully one day we'll see an EdT line. At any rate, looking forward to see what else Manuel has in store for us!