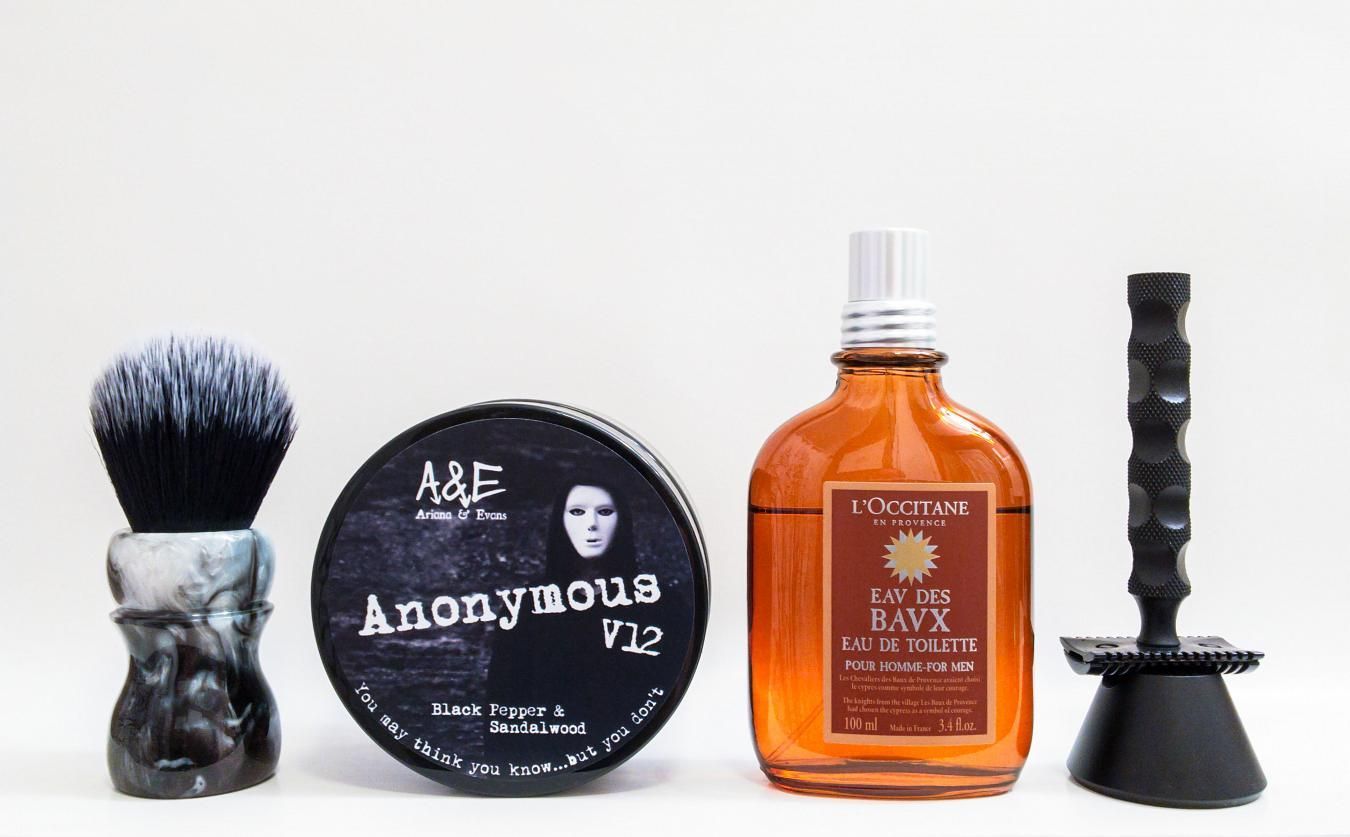 I incorporated yogurt, imported camellia oil from Japan, added Manteca to go along with the tallow, colloidal oat meal for extra slip (in addition to the bentonite clay), agave and changed the ratios of my previous ingredients, which are all still being used...

First, let's talk about what this is - and isn't. It's a test batch of #ArianaEvans soap to float some formulation changes past a small group of testers. It is not in production, nor will it be - unless it offers a substantial improvement over the existing base (the well received and current Goat Milk and Lanolin formula). The scent is kind of besides the point - it's light and only meant to give it a little something. The name and/or artwork are not meant to be political or anything like that... Just that the ingredients are (largely) anonymous and unspecified.

The scent? As mentioned, it's basically a freebie. It has notes of black pepper and sandalwood. Nothing more, nothing less. That said, it smells nice. Light, uncomplicated. Just a slightly spicy wood.

Here's what you came for. How's the performance? It's at least as good as the current formula if not slightly better all around. Now, before I get too far ahead - I've only used it once, and will need more time with it. That said... Loading seems largely unchanged; my usual time of 30s resulted in plenty of creamy lather for a three-pass shave. It's a bit thirstier though, so adding water as you build the lather is the way to go. This part took perhaps a little more time than the current formula. You can add a lot of water, which builds slickness - but it was already very good; both primary and secondary. I didn't find this aspect to be markedly better, but certainly a little. Post-shave feel is perhaps most improved; it's nicer - more moisturized feeling and supple.

So is it a "substantial improvement?" Tough to say without further use, but I can say that aside from a little more prep in building lather, everything is a little better. The yogurt is great for your skin in numerous ways; the agave has surprisingly similar properties as well. The Japanese camellia oil is a rich source of Palmistic and Omega-6 Linoleic fatty acids, as well as numerous anti-aging polyphenol antioxidants. Furthermore:

Camellia oil is a fast-absorbing moisturizer. It has a silky, creamy texture and is non-comedogenic (does not block skin pores, and does not contribute to acne.) Among other benefits, it is a transdermal carrier of cell rebuilding nutrients and bioactive compounds (collagen and elastin) into skin, which repair damage caused by dryness, sun exposure, and aging.

...Manteca is (Spanish for) "shortening" in English; lard, in other words - pig fat. An ingredient presumably added for "super-fatting" the soap base. So basically a bunch of good stuff for your skin, all around! Should it replace the current formula? I don't know if it's radically different enough to warrant it, but not a single one of the new ingredients is a bad thing... I say go for it.

I finished up this shave with a great set of software from L'Occitane en Provence called Eau des Baux in a balm, deo and EdT. #Loccitane makes some good stuff and this particular scent is one of my favorites of theirs. Definitely check out my in-depth review of Eau des Baux for more info on this stuff. In a couple of words; get some!

Hardware for the day included the Frankenrazor that is a #Yaqi black Mellon head on a The Shaving Shop The Assassin razor handle, fitted with a #Feather blade on shave four. I'm finding that compared to my original review of this razor head that the Feather blade is much rougher than the PolSilver and no closer of a shave. Frankly, I'm not surprised. Overall, I find the Feather blades to be overrated (in most razors). The brush is a nice black and white piece from #LowbornSupply with a 24mm Tuxedo knot. The #GTP scuttle rounded things out.

The shave was a bit mixed. The Feather blade has been a bust in this razor (head) but the software was a delight. I found the #testing batch to be, overall, improved in practically all areas. Does it meet the criteria for a "substantial improvement" to dethrone the current formula? I'm not totally convinced, but visible or not - the changes provide an arguably better product, regardless. I certainly have zero complaints. But again, more time will tell... Stay tuned!

You can order Eau des Baux online from Amazon (where it's highly rated) here: