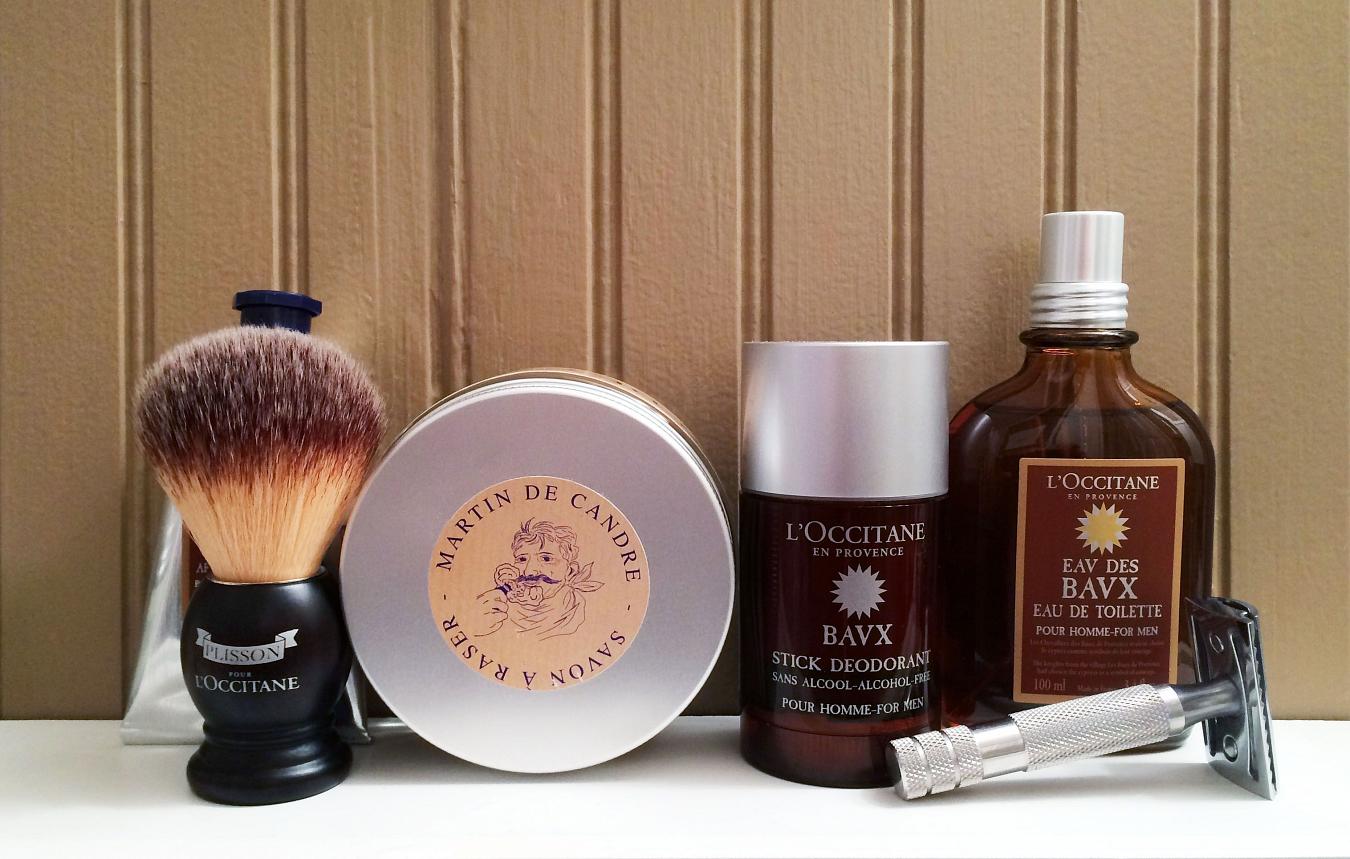 L'Occitane en Provence has been on my radar for a while, but I couldn't resist the call of their software any longer... Today's SOTD features an exquisite scent in the lineup of Eau des Baux #balm, #deo and #EdT!

First a little background on L'Occitane en Provence (usually just called L'Occitane for short) which is pronounced LOX-EE-TAHN. They were started in 1976 by Olivier Baussan (who was only 23 at the time) in the region of Provence, France and sold in local markets. It wasn't until 1981 that the first factory and store opened up in Volx. Starting in the 90s to this day, they've blown up with boutiques opening worldwide - hitting 2,000 stores by 2012. A respectable company, caring for people (namely the blind and women's rights) and the environment (through eco-friendly packaging) - with highly natural products that largely work as advertised. Their branding is strong and unmistakable. Chances are you've at least passed by one of their boutiques, from malls to Main Street.

Granted, they sell products geared mostly towards women, but have a fair amount of unisex offerings and their men's line is ever increasing. They seem to have hit critical mass about two years ago with the introduction of the Plisson Cade shaving brush for $30 (or less, on sale) that everyone lost their minds over. They sold like hotcakes through word of mouth and social networks... And shaving brushes haven't been the same since; those synthetic knots (and variations thereof) are found in countless brushes these days. You can see one of these pictured above. Very nice brush, especially for the money, though it's a bit floppy. Nevertheless, it works great. They make one shaving soap (Cade) and several shaving creams; alas, I don't have any of them. So I went with Martin de Candre to keep it French, naturally.

In Provence, the knights from "Les Baux" village chose the cypress tree as their symbol of strength and courage. Discover Baux products, fragranced with the blend of wood and incense, for a sensual and mysterious effect.

The Eau des Baux collection consists of eau de toilette, after shave balm and deodorant (and more) all carrying the same scent (I bought all three at once). The accord at first blush is woodsy and spicy; in fact it's described primarily as "cypress wood and incense." Upon closer examination, it's more complex than that, with top notes of pink pepper and cardamom, middle notes of cypress and incense and base notes of vanilla and tonka bean. On open, the pink pepper and cardamom really accentuate the cypress and incense - themselves having a sweet, spicy yet fruity vibe, with dry balsamic and peppery notes. The transition into the middle just intensifies the woodsy, spicy feel as the sweetness and fruitiness subsides. On dry down, the base notes of vanilla and tonka bean (which smells like a warmer vanilla) support the middle notes, which never truly dissipate. You're left with a warm, vanillic and woodsy scent that's just awesome. I'm thinking this would make a great finish to Barrister and Mann Lavanille or Vanille among others. Sillage is impressive, but not overwhelming - and longevity is excellent, lasting six to eight hours.

The Eau des Baux After Shave Balm comes in a tube of 75ml/2.5 fl. oz. for $34. The product itself is somewhat thick; rubbing it between your hands and applying it to the face, it dissipates quickly and easily as it soaks into the skin. It's not overwhelming or greasy feeling at all and leaves the skin smooth and soft. The scent strength is mild. The ingredients are fairly lengthy, not like your typical artisan offering - and more like a commercial offering (though nothing scary):

The Eau des Baux EdT comes in an amber glass sprayer bottle of 100ml/3.4 fl. oz. for $58. The ingredients are fairly simple, respectively:

Hardware for today consisted of the #Mühle #R89 razor with a #Feather blade on shave four. The aforementioned #Plisson Cade brush made quick work of loading the #MdC soap and working it into a fine lather in the #GTP scuttle, where it stayed nice and warm throughout the shave. I find Monday morning shaves to always be the best, as a weekend's worth of growth shaves down the closest (even with a mild razor) and today was no exception. I was left with a near-BBS shave and the post-shave feel supplied by the balm is really nice.

I was originally going to grab either the L'Occitan or Vetyver EdTs, having tried them a week earlier in-store and really liking them. It wasn't until I returned that I noticed the Eau des Baux and immediately liked it... I'm a sucker for warm, spicy, woodsy scents and vanilla sealed the deal. I grabbed it, along with the matching deo and balm because I prefer complete combos like that. Even with a $10 off coupon, I got dinged for $110... But this stuff is money. I'm quite happy with the performance of these products and especially love the scent! I'd very much suggest checking out the #loccitane boutique the next time you're out and sampling their scents... They're all rather nice!

You can order online direct from L'Occitane en Provence:

Or through Amazon (where it's also highly rated) here: