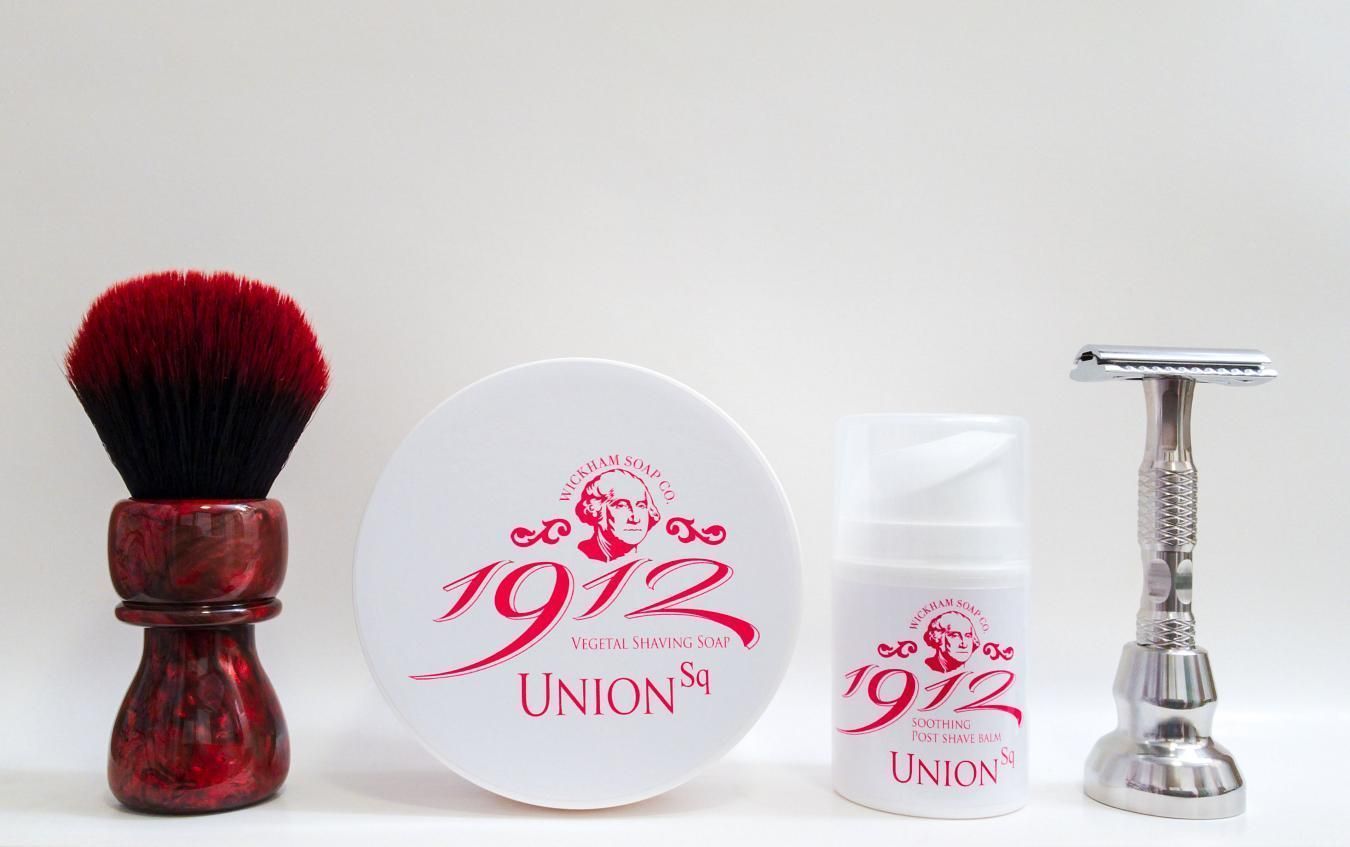 An exclusive to Pasteur Pharmacy in NYC from Wickham Soap Co. called Union Sq in a #soap and #balm.

New to the den lately is Wickham Soap Co. and today's flavor is Union Sq! It's a scent exclusive for Pasteur Pharmacy in NYC. I did an in-depth review of Magnum last week, so check that out for all the details as well as the review of Club Cola for more. Today I'm just going to talk about the scent of Union Sq though it will be a little hard. Either way, another hit from #WSoaps.

First, a brief note about the name... Union Sq is named after Union Square in New York City, a public plaza. It is bounded by 14th Street on the south, Union Square West on the west side, 17th Street on the north, and on the east Union Square East. It links together Broadway and Park Avenue South to Fourth Avenue and the continuation of Broadway.

Second, you'll notice the balm label - it is the latest version, which matches the soap tub. The previous reviews of Magnum and Club Cola show the prior version; more generic and in black and white.

Officially, Union Sq has no notes listed, as it's not available on the Wickham Soap Co. website, rather only direct from Pasteur Pharmacy which is a brick and mortar. I've reached out to Darron to get them (and will update this review accordingly). Unfortunately, the scent strength is rather light which makes sussing out the notes and pyramid a bit difficult. I'll need to spend some more time with it; a luxury I don't generally have in the mornings. But to give you an idea, the scent is cologne like, with a vibe that's almost honeyish; with subtle florals and a wood like sandalwood on the base.

As for lather, it performed much like my previous shave with Magnum and Club Cola - a 30s load with the brush and it produced abundant, creamy lather that has excellent primary and very good secondary slickness. Literally oodles of lather; I could paint my face thickly for each of the three passes. I really have no complaints and the only thing I'd ding it for is secondary slickness. It's there, but not as slick as primary - but you can certainly do additional strokes.

Hardware today consisted of a razor that I've put aside for way too long now... The always reliable #Mühle #R89, fitted with a fresh #PolSilver blade and a #TimelessRazor Pineapple handle and stand in stainless steel. The handle is a bit too long for the already heavy heads of the .68/.95mm variety but it works rather well on this razor. It gives it a bit more weight and thus cleaving action. The brush for today was none other than the Vlad from #GrizzlyBay, rocking a 26mm Blood knot. Finally, there's my trusty shaving sidekick, the #GTP scuttle.

I continue to be impressed with the performance of Wickham So Co. in general as well as the soap and balm. It's an excellent value, the packaging is top notch and most importantly, the software works rather well. And yes, it's a vegetal soap base. Third time's a charm and I'm just digging this software. My only complaint is the generally weaker scent than the previous two I've reviewed.