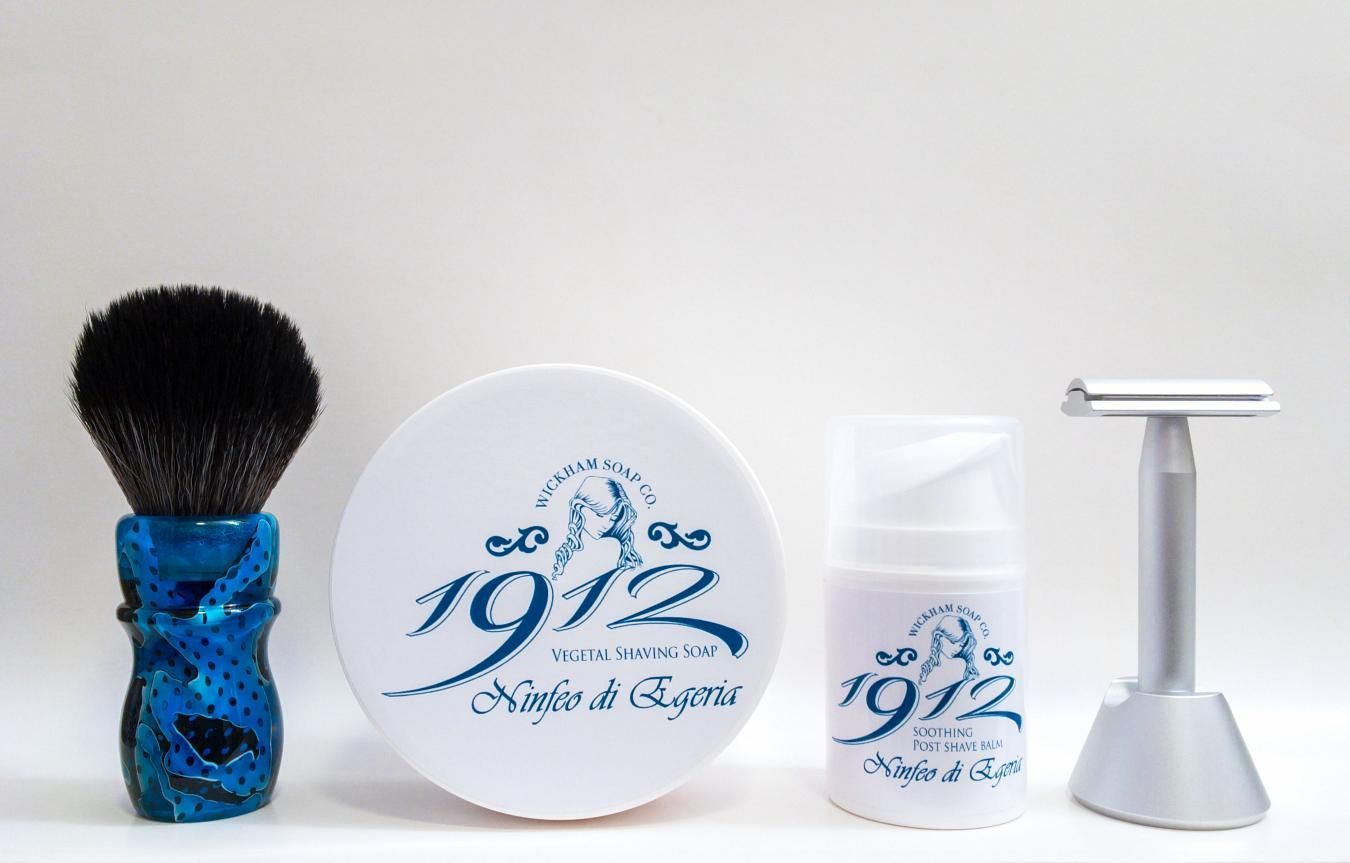 Ninfeo di Egeria is a sprightly green fragrance, both charming and magically seductive. Opening with a short burst of citrus entwined with the creaminess of fig leaf. The intoxicating green and base notes patter through to reveal a warm feeling of sexiness. A magnetic fragrant, a lure of temptation cast by the nymphs, many mortal men, heroes and kings have been unable to resist this, the question is, can you?

New to the den lately is Wickham Soap Co. and today's flavor is Ninfeo di Egeria I did an in-depth review of Magnum, Club Cola and Union Sq so check those out for more. Today I'm just going to talk about the scent of Ninfeo di Egeria. The labels are the latest version, which features a custom bit of artwork and color, and the soap and balm match. Another hit from #WSoaps.

First, a brief note about the name... Ninfeo di Egeria is a nod to what it's inspired by; Annick Goutal Ninfeo Mio (2010) which itself is inspired by the Garden of Ninfa near Rome - often called "the world's most romantic garden." That fragrance is likely unfamiliar to most; it's inline with Acqua di Parma Blu Mediterraneo - Fico de Amalfi (2006) for reference. Quintessential Italian fragrances; citrusy on top with hearts of fig and woodsy, musky bases. Before it was Ninfeo di Egeria (which followed shortly after) it was White Note and made as a Limited Edition for the Sin Corte No Hay Gloria forum; described as:

Limited Edition for the Spanish forum Sin Corte No Hay Gloria that evokes a walk through a garden of citrus and fig trees. Sparkling, fresh and protective.

Ninfeo di Ageria has top notes of Amalfi lemon, galbanum, petitgrain and bitter orange; middle notes of fig leaf and lentisque; bottom notes of wood and amber. The open, as you might imagine, is citrusy - mainly lemon and (bitter) orange. The galbanum appears more towards the back and sets the stage for what's to come with its fresh, woody, spicy and balsamic scent. It ties in perfectly to the middle containing lentisque. Lentisque is interesting and uncommon; it too is a woodsy, green, warm and balsamic scent. The fig adds a nice twist as it too is warm, spicy and vanillic but adds a sweet and fruity vibe. These three notes are what differentiate these fragrances from the often aquatic turn other Italian fragrances take. The base is woodsy like the others, but uniquely adds amber; warm, resinous, earthy with a subtle citrus undertone. Scent strength is the lighter side of medium, unfortunately.

As for lather, it performed much like my previous shaves with #WSoaps Magnum, Club Cola and Union Sq - a 30s load with the brush and it produced abundant, creamy lather that has excellent primary and very good secondary slickness. Literally oodles of lather; I could paint my face thickly for each of the three passes. I really have no complaints and the only thing I'd ding it for is secondary slickness. It's there, but not as slick as primary - but you can certainly do additional strokes and push it a little further with additional water.

Hardware today consisted of a silver #StandardRazors with a #PolSilver blade on shave four. The brush is a wicked piece by #WildWestBrushworks called Topaz Mesh sporting a 26mm BOSS knot. The #GTP scuttle laid the foundation for all this goodness.

I continue to be impressed with the performance of Wickham So Co. in general with the soap and balm. It's an excellent value, the packaging is top notch and most importantly, the software works rather well. And yes, it's a vegetal soap base. Each shave just seems to get better. My only complaint is the generally weaker scent than some of the others I've reviewed.