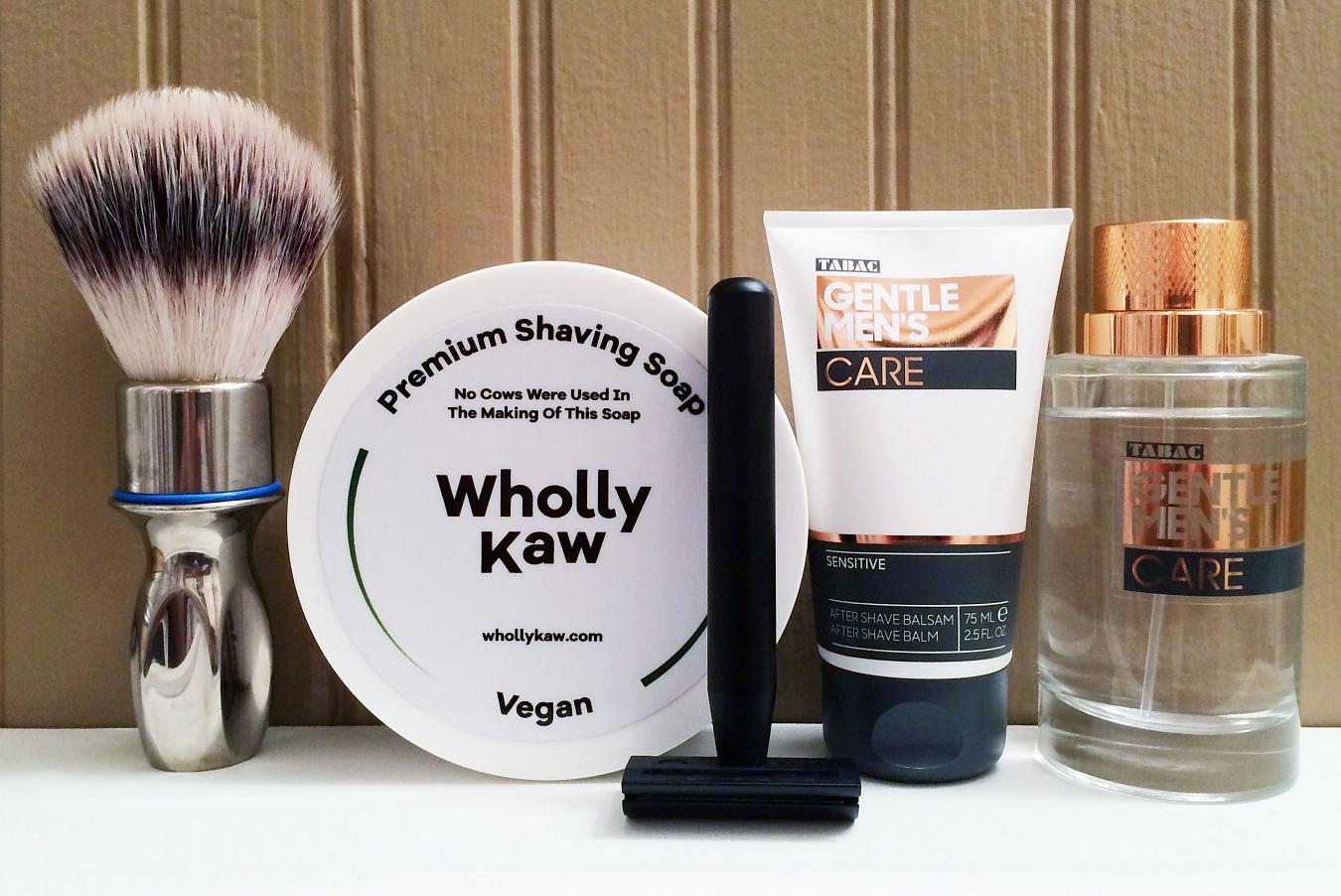 In today's SOTD I give a non-tallow #soap from Wholly Kaw a go - with Almond Medley! Followed up the the aptly named Tabac Gentle Men's Care #balm and #EdT!

I didn't actually go out and grab this soap specifically; it was part of a secondhand lot that I picked up. I recently reviewed their new tallow formula in Washington's Blend rather favorably, so I had high hopes... Though I tend to prefer tallow soaps and I'm not a big fan of almond scented stuff. It usually reminds me of marzipan which I'm definitely not a fan of. Odd, really - as it's a German treat and my dad loved it. But those treats were all his.

The scent, it turns out, is quite nice and fairly mellow. Like most almond scented soaps (e.g. Cella, RazoRock Classic etc.) it smells of almonds - and cherries. The reason is pretty simple, actually. Benzaldehyde is the main chemical found in both almonds and cherries - and found in all of these soaps. It's a synthetic fragrance, as the natural oil from the pits of the cherry, plum, apricot and peaches are a controlled substance in the USA. Why? Cherry pit oil can be used to make nitroglycerine (more here) and peach pit oil contains a high concentration of cyanide for a start. At any rate, it smells like almonds and cherries; slightly sweet and a tiny bit bitter. The scent level mellows out once lathered.

The performance is rather good but a little mixed. It loaded and lathered up quickly and took a wide range of water. On the pro side, it produced ample lather that is somewhat billowy, yet dense enough to provide very good cushion - with equally good primary slickness. On the con side, it lacks a little on residual slickness and face feel. This can be explained by the rather simple ingredients:

For follow-up I went with Tabac Gentle Men's Care balm and EdT, which I won't get into here - I've reviewed it extensively before. I went this route at the last minute because I just don't have anything else almond scented, let alone a matching splash - and it's just really good stuff. #Tabac can do no wrong.

Hardware today consisted of the #StandardRazors razor with a #PolSilver blade on shave four, making for a lovely, mellow shave that was close and comfortable. The #BSB Shaving Brush handled the easy task of generating lather in the #GTP scuttle.

Verdict? This #WhollyKaw vegan soap is quite nice... And while it creates a lovely lather, it does lack a bit on secondary lubricity and certainly face feel - though it's worth pointing out that Almond Medley is no longer produced and sold for $13.99/tub when it was. It's also based on the original formula from 2014. The latest vegan formula (which adds shea butter and jojoba oil post-saponification) at $17.99/tub is a better bet, but personally, for an extra buck ($18.99/tub) I'd opt for the new tallow version - it has a bunch of additional ingredients (essentially tallow, castor oil, kokum/cocoa butters and lanolin) that ups the face feel by quite a bit and more inline with today higher end soaps.