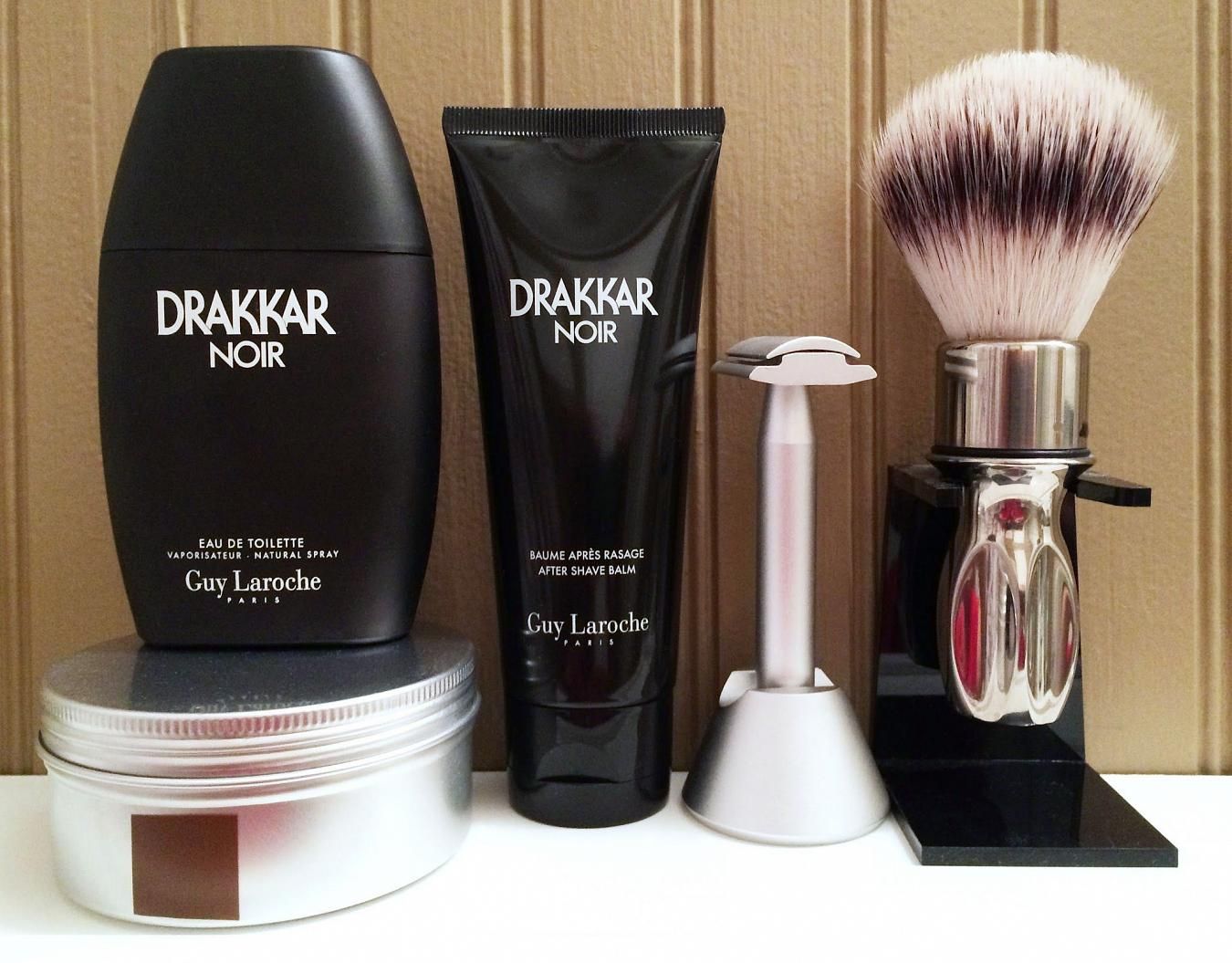 So yeah, I got my Drakkar Noir gift set yesterday; check out the first impression for more. Today I actually used all of the products.

I was going to do a review of Haslinger Schafmilch soap but the strangest thing happened this morning... The aluminum tin (just like the one pictured) that was sitting in the medicine cabinet for a year or two now - wasn't there. Must've gotten mixed in with other tins and stashed in the last couple of days. So, the next best (or equal) thing... Mitchell's Wool Fat or simply, "The Fat."

Mitchell's Wool Fat probably needs no introduction. It was one of the first products I picked up when I started DE shaving a few years ago (along with Proraso Green). It set the bar pretty high from the get-go, and was really something back then - before everybody was an artisan. One of a few soaps (hard ones anyway) that contained lanolin. Of course, the Portuguese have been rocking it in their creams for just about as long (e.g. Musgo Real). These products all go back years (and years) and are true shaving classics. Even today, they're still the classics because they work. Today I loaded The Fat longer than I typically have in the past - a full 30s worth. I may have added a touch too much water, but I ended up with literally a scuttle full of billowy lather with decent (but not standout) cushion and glide. In fact, when I was done shaving there was enough lather left over for another three pass shave! Because it was billowy, the cushion and density weren't where they should've been - yet the glide wasn't awesome, either (I don't think I was that far off on the ratio, but shit happens). It's nice to return to the earlier products - it's a damn good soap, but the real magic is in the post-shave face feel... Where it excels. And I'm a big fan of the scent, though some don't care for it. It's also touchy about water hardness; I have extremely soft water and I could seriously make lather from a pile of dirt.

Now on to the Drakkar Noir trio of aftershave #balm, #deo and #EdT. Check out the first impression and #MailCall for more info on the scent, packaging and history. Performance wise, the aftershave balm worked quite well. It did the job and carried the scent. Only a little dab did the job. Followed by the deo, it stuck well - I could feel it hours later... And of course, also carried the scent. Finally, the EdT. It's clingier than that crazy ex-GF with good sillage to boot. Nice to have a full suite of products in the same scent. As mentioned yesterday, I might pick up WSP Rustic Shaving Soap in the Fougére Noire scent to go with.

Hardware today was, what else, the #StandardRazors razor that I'm just growing more and more fond of. Did its job very well once again today, with the #PolSilver blade on shave three. The #BSB Shaving Brush made mad lather out of The Fat in the #GTP scuttle.

A very nice shave today, featuring products that were once very popular - but today might get little notice or neglected in your den. They're both classics in their own right, and they're that way for a reason. They still work great, aren't expensive and can be had fairly easily. Shave on, brothers.