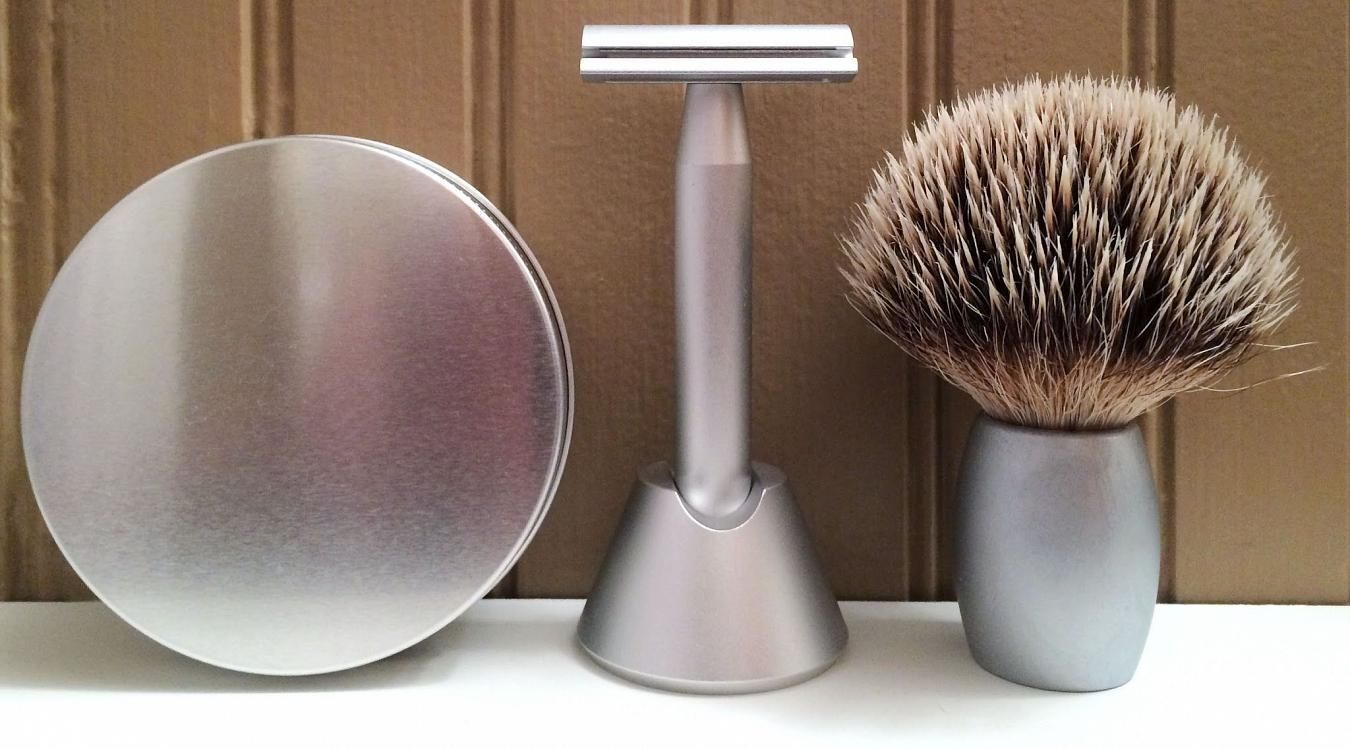 Today's SOTD is brought to you by the chemical element AL along with Klar Kabinett #soap and Geoffrey Beene Grey Flannel #aftershave and #EdT.

C'mon, look at that picture. That's a whole bunch of aluminum at its finest! It ticks all my Teutonic OCD boxes quite nicely (and matches my Apple gear). :p

I've reviewed the relatively unknown (because it was discontinued) Klar Kabinett soap before so I won't get into it too much today. It's made with all natural ingredients and free of preservatives or artificial colors. Klar even chose to use essence of rose, instead of a synthetic fragrance, which is rare due to cost reasons. Needless to say, the profile is... Rose. Performance wise, it's excellent - lots of semi-billowy lather with ample cushion and glide. I have, quite literally, 1kg of it... So I need to use it more!

No, the real star of the show today is the #StandardRazors razor right there in the middle from Standard Razors. I'm always doing software reviews - well, today it's about the hardware! I got a good deal on it secondhand, with base. There's surprisingly little out there about this #razor. A few simple reviews, a lot of chatter on forums around the time of its release in 2013, with less every year... These days, it's a bit of a rarity. The company has issues keeping them stocked, but that's supposedly improving fairly soon.

So yeah, what you've read is mostly true. It's light - but not quite as light as you might expect from aluminum (it's machined from a better grade of aircraft aluminum, though the exact type is not specified) and comes in at 49g (IIRC). It's made in China. Don't let either of those dissuade you. The modern design is very nice, especially the head geometry (more below) as is the workmanship/finishing. It's clean, without machining marks or other flaws - even the base, on the inside, etc. Finally, it's all anodized, though this one is called "raw." It also comes in "black" and "gunmetal" finishes and is available with or without the stand (and separately). Despite the lack of knurling on the handle, which is on the longer side - it does not slip in your hand.

One of the biggest gripes about Standard Razors is the fact that it's a "four piece" design; the three usual pieces... But the handle has the threads, not the top cap - by way of a double ended screw (stud). This might seem to suggest that you can't use any ol' handle... But this is incorrect - you can. You simply need to take the stud out of the handle and screw it into the top cap, perhaps using a little (blue) Loctite - and then you're good to go. But at the end of the day, the real question is... Why bother? It defeats the whole purpose of the design to use a different handle. Both design and weight/balance. Plus you risk damaging the softer aluminum head when you screw down your handle. Just... Don't.

Now onto the best part... How does it shave? Long and short of it is - it shaves wonderfully with BBS results. I wanted something a little more efficient than my Mühle R89 and Feather AS-D2 (which I've taken to shimming) and the verdict is in... Bingo! While the Standard Razors easily shave as smoothly as the other two, it's definitely more efficient (slightly more aggressive) and nets a smoother face. I fitted it with a fresh #PolSilver blade which dropped in and aligned perfectly - and it was smooth. I'll have to try a #Feather in it as well... Another interesting thing to note is that the Standard Razors razor is easily my loudest razor - lots of audible feedback, which is nice - it indicates where you need to make further strokes. The light weight wasn't much of an issue at all; something that I was initially concerned about. In fact, it makes the razor quite nimble in hand. Finding the angle was a piece of cake; it likes to be a little more horizontal (on the handle) than the other two. I'll use this razor for the next four shaves at least, so stay tuned for more.

I finished up with Geoffrey Beene Grey Flannel aftershave and EdT as it seemed a fitting fragrance to follow up the rose scent of the soap with - and just because it's been a while. I've reviewed it a bit more in-depth previously (http://tinyurl.com/pe97j7w). It's basically an oriental wood with top notes of galbanum, neroli, petitgrain, bergamot and lemon; middle notes of mimosa, iris, violet, sage, rose, geranium and narcissus; base notes of tonka bean, almond, oakmoss, vetiver and cedar. The aftershave does an admirable job, and the EdT is tenacious, with good sillage and duration (especially on fabrics).

A real nice shave today with some solid products... A discontinued classic soap, a modern and somewhat hard to find razor and finally, another classic fragrance. Huzzah!