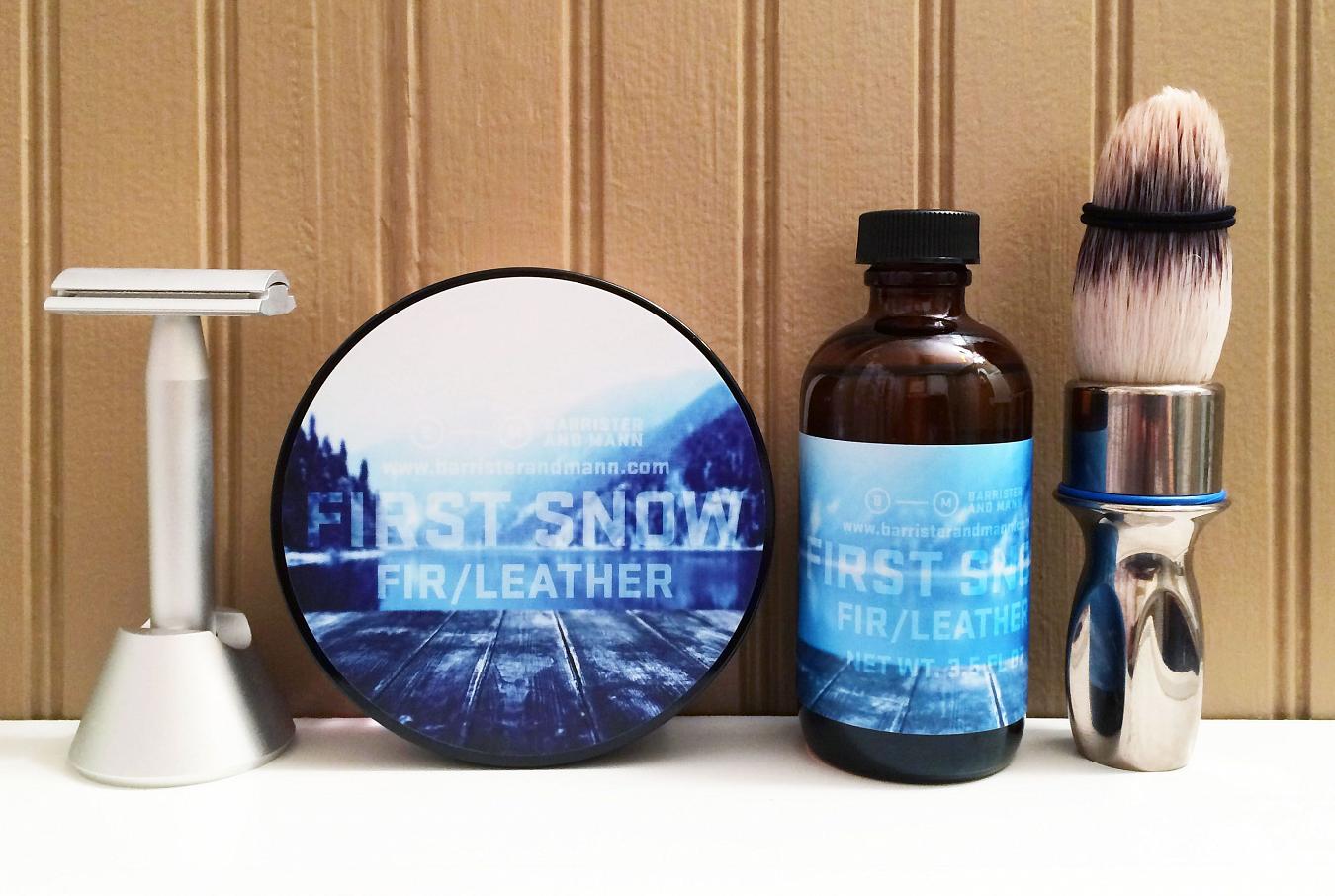 Winter's here... You can smell it in the crisp air as the snow crunches under your feet. The scent of evergreens on the wind as you pop the collar on your new leather coat. No, wait - that's Barrister and Mann First Snow #soap and #aftershave!

That one line really says it all; it describes this scent to a tee. Using natural fir needle oil, it's primarily fir forward resting on a bed of soft leather. Not the edgier, darker leathers as in some scents; this one's more like a gentle suede. As the description on the #barristermann site promises, it's "a gentleman's menthol" with just a hint... Enough menthol to give you the sense of a chilly day, and only adds to the profile rather than overwhelming it. The scent strength is initially a lighter shade of medium, but because of the highly volatile nature of the fir oil, dissipates fairly rapidly... That's terpinyl acetate for you. The leather remains, but it's fairly light. Originally produced in February 2014, First Snow has come back for the 2016 winter season in the new glissant soap base. And while the scent formula is in the same proportions as the original, it was made a stronger (same menthol level, though). Then there's the new packaging...

The package came with a lovely holiday postcard; the back has the recipe for the cookies that inspired the Dickens software along with a couple of Hershey's Kisses and of course, the soap itself. It's in a robust, heavy tub like that found on the newest B&M offerings (e.g. Cologne Russe and Seville) but with a clear lower half. The label, sitting on the black top half is beautifully done. Very much like Passiflora which I reviewed yesterday. And oddly enough, there's an ingredient label on the bottom of the tub whereas Passiflora does not. For some reason, the artwork reminds me of the TV series Twin Peaks and the central character of Laura Palmer... She was found by the water, and the cinematography was rendered in a cool blue tone. The similarity wasn't intentional, however. And maybe it's just me. At any rate, the aftershave bottle matches superbly.

Hardware today consisted of the "raw" colored #StandardRazors razor with a #PolSilver blade on shave four - the #BSB Shaving Brush massaging the lather into art within the #GTP scuttle.

A really lovely scent. Light and fleeting, just like the menthol contained within, it'll make a great software combo for year 'round use - but you'll want to probably follow up with your own cologne afterwards. Performance, naturally, is beyond reproach. It's really nice to see this old classic come back with numerous updates, and as a fan of all things Barrister and Mann it was nice to be able to grab it when it went up on the site on November 22, 2016. It will be produced until March 22nd, 2017. Tomorrow I review Dickens which was also released for this holiday season!