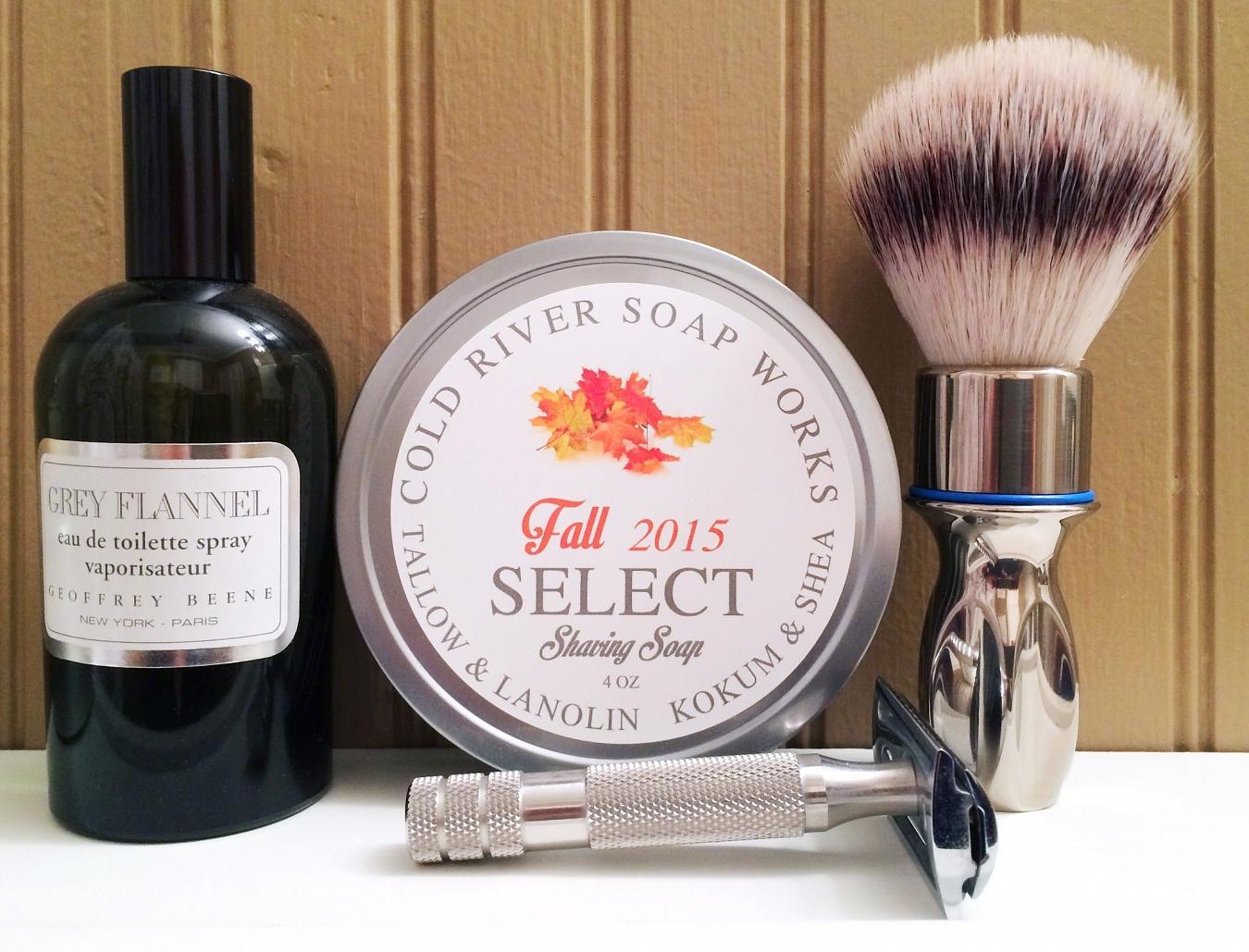 I was originally going to use a different #soap and #aftershave today, but I can't resist the siren call of new software! #Coldriversoap's Limited Editions (LE) are highly anticipated by fans, and this year's Fall LE is no exception. Being seasonal, they're only produced for a couple of months at a time - and this year's Fall LE came out on September 23, 2015. As a heads-up, next year's will be different. That's why there's a "2015" there on the label.

The reputation of CRSW is well-founded, as it turns out. Besides the packaging and presentation, which I touched on yesterday the performance is what truly matters - and the soap did not disappoint. The scent is everything you'd imagine a spicy fall potpourri to smell like... Primarily an apple, ginger and cinnamon accord but it's more complex than that. There's also a citrus note in there. The scent strength is robust and in fact, I could smell it for quite a while after the shave! That's when you notice the slightly musky, wood and vanilla notes of the base - but the spicier notes are still there. Really, really nice fall scent. Truly a shame that there's no matching aftershave or balm like there is for the Spring LE.

The performance was top-notch! As I suspected, it's a bit like B&M soaps in that it prefers to be loaded on the heavier side (either load longer, use a brush with more backbone or slightly bloom it beforehand). Add water to taste. The resulting lather was copious, thick and yogurty with loads of cushion and an interesting texture. No air bubbles were visible at all and it had a glossy sheen to it. Slickness was really good - while it didn't "wow" me, it was still better than most.

This soap truly shines in the post-shave face feel. Nobody has an ingredient list like CRSW (though B&M is close) - it's a veritable who's who of all the best stuff...

...I'm a firm believer in several of the ingredients; tallow, lanolin and avocado oil - in giving an edge to soap formulas. Some of my favorite soaps include at least a combination of these ingredients. But it doesn't stop there - there's more.

For the scent today I decided to go with Geoffrey Beene Grey Flannel because, well - it's a grey, rainy day and nothing says "fall" like flannel! Okay, so maybe that was a stretch. In any event, the aftershave is pretty basic - meaning that the face feel came from the soap, primarily. It's as if I used a truly excellent aftershave even though I didn't. My face feels soft and moisturized without being tacky. If you're the type that prefers not using aftershaves/balms, this soap should be on your short list.

Hardware for today was my #Mühle #R89 razor fitted with a fresh #PolSilver blade and lather duties fell to the #BSB Shaving Brush and #GTP scuttle. Just a lather bomb combo.

A truly nice shave - an excellent, intoxicating scent with truly outstanding performance during and after the shave. I look forward to dialing in the soap a little more and trying the other scents, as well as picking up the Winter LE to complete my collection! I do hope we'll see more matching LE aftershaves and balms in the future, as this is the only shortcoming I see (though there's plenty for the regular offerings and the Spring LE*, a.k.a. Prato Verde*).