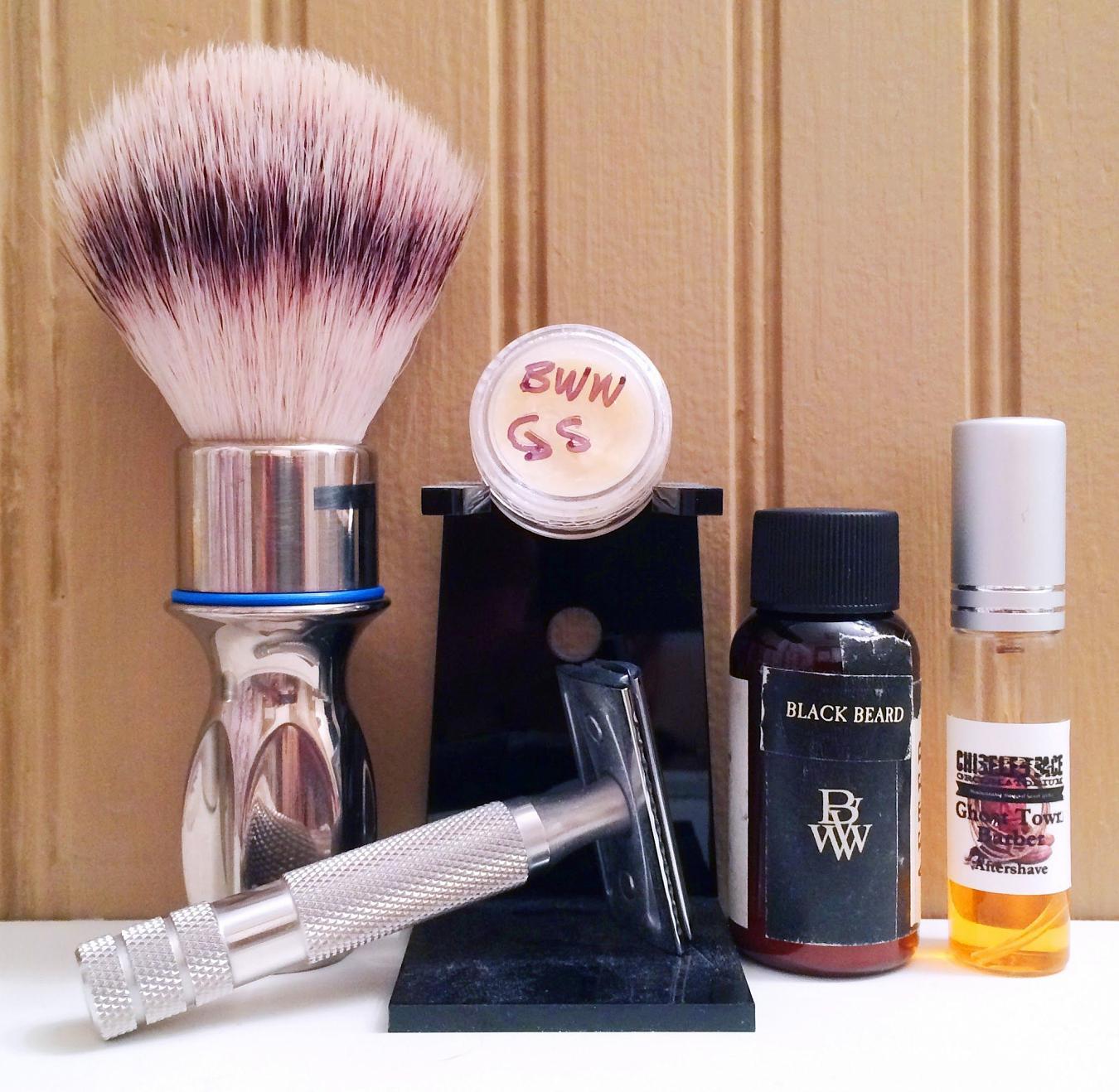 After yesterday's experience with Captain's Pipe I was a little nervous. How would this soap perform today? Thankfully, my two key complaints from yesterday; face irritation and unstable lather weren't an issue today! I believe any new soap should be used at least a couple of times to really judge its performance... So here we go.

There was no face irritation from Ghost Ship which confirms to me that it was due to the scent (e.g. essential oils) used in Captain's Pipe and not the soap formula itself. Today I also used a bit more water, which made for a fluffier lather - which didn't really break down as it did yesterday. It still got a little airy, but didn't flatten out on me and didn't require any rehydration in the scuttle. Unfortunately, it didn't seem quite as slick though... I suspect it was a little too much water causing this. In my opinion, the soap seems a bit finicky with a narrow sweet spot as far as water goes. The scents are nice but the performance doesn't speak to me.

A quick note on the scent. It's described as "sandalwood, grapefruit and our very own black amber mix." I got primarily grapefruit, with hints of sandalwood. I didn't get the amber so much, but it did round out the scent a little. One thing I found curious is that the soap is mentholated; which is not mentioned anywhere. It was subtle and pleasant, but I was surprised. Scent strength was on the weak side, and the consistency of the soap is that of a croap.

After the shave I applied some Black Beard balm, also from #blackshipgroom. A whitish, translucent lotion - it applied nicely, absorbed quickly and left a very nice face feel - the scent was pleasant, but fairly weak. It's described as "a classic bay rum with a kick" but I couldn't really tell one way or another. It did have a bay rum vibe.

To get some scent going for the day, I had to resort to another product and went with #chiseledface Ghost Town Barber which, like their other products - did not disappoint. Described as "a classic barbershop scent with a western twist – main notes being bergamot, basil leaf, white patchouli, oakmoss, texas cedar, leather, smoke, and gunpowder." Definitely a really nice, complex scent - but a little weak.

Hardware today was my go-to #Mühle #R89 razor sporting an equally go-to #PolSilver blade on shave five while the #BSB Shaving Brush whipped up the goods in the #GTP scuttle.

I'm not sure what to think of Beaver Woodwright software at this point. While the scent was strong on Captain's Pipe it was also irritating - Ghost Ship soap on the other hand was noticeably weaker (as was the scent of the Black Beard balm). Neither soap really impressed me, performance-wise. I won't be buying any of these products, but that's just me. While I'm generally a fan of Chiseled Face products (especially Summer Storm) I was a little disappointed that Ghost Town Barber wasn't a little stronger on the scent with greater longevity - but face feel performance was excellent. I suspect this might be abnormal.