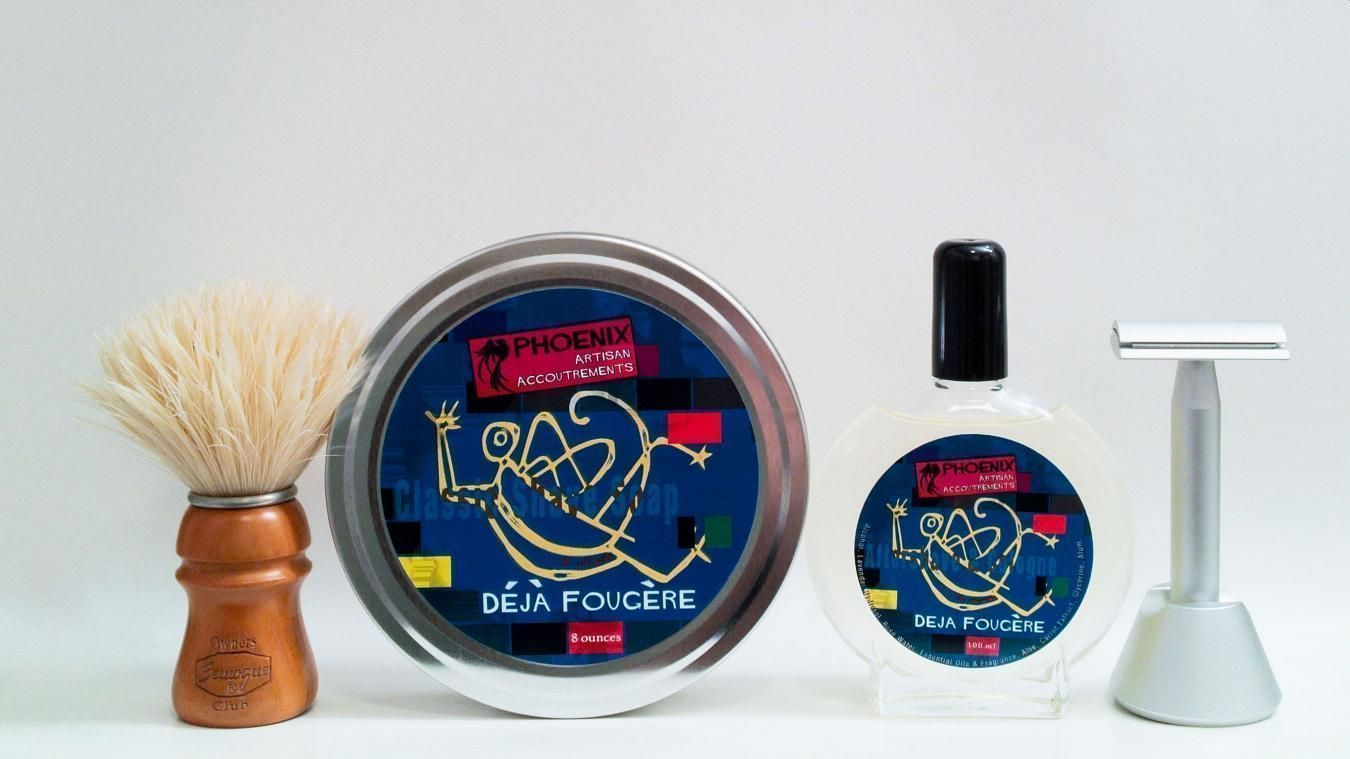 Déjà Fougère is my very best attempt at recreating the original Houbigant Fougère Royale Scent, created 133 years ago! I think I got pretty close with enough different nuances to call it my own...Déjà Vu? Green, woodsy aromatics with a light, light fruity undertone.

I've hesitated posting SOTD reviews of #paa software for several reasons. One is the fact that my (unfortunately large) stock is mostly all from 2015... This older "Synergy 2.x" formulation has already been revised into "Synergy 3.x" and "Crown King" formulas by now. The year 2015 is when I would say that they peaked. There weren't nearly as many artisans as today and they stood out for creativity. Care was still being taken to create some fairly nice scents, more often than not (and unlike today, where there's a mediocre release every couple of weeks). Dèjá Fougére is one of those scents from back in the day that was really pretty nice, and one of my favorites - even today. Besides, I have a metric assload of this software in general and need to use it up... So I figured, today's a good day. There's also another reason, which I'll explain below.

A quick note about the Déjà Fougère scent itself. Ironically, it's a clone of Houbigant Fougère Royale which was created in 1882 - the first perfume to use the synthetic coumarin and also considered to be the first modern perfume. It defined the fougére category. Déjà Fougère has top notes of lavender, pineapple, bergamot and clary sage, middle notes of geranium, heliotrope, rose, coumarin and carnation with bottom notes of oakmoss, tobacco, tonka, dark musk, vanilla and hay. While it doesn't smell anything like the real thing, it's nice on its own.

Let's start with the packaging. The large 8oz. tins were part of what made "Synergy" well, "Synergy." It was to facilitate loading of the soap, and it certainly does - unlike any other soap before or since. Priced at $18.95 it was a pretty good deal. Unfortunately, the tins are cheap and flimsy and prone to rust - more so if you're the "blooming" type. The labels (as with those on the aftershaves) are also cheap, non-waterproof and home printed - prone to wear and tear... More so the aftershaves, where any drips would quickly smear the print right off. While the tins have given way to nicer tubs these days, the bottles remain essentially unchanged - as with the poor labels. At least back then, branding was more consistent - but the aftershave packaging never was. You never knew if a release would have a clear or amber bottle, round, flask or rectangular shaped - or with white, black or gold caps. Some things never change.

The soap itself is fully mediocre across the board. That's not to say it's bad, not at all. It'll get the job done, but nothing really stands out - except one thing. Scent strength is excellent. The soap generates an impressive amount of less impressive and fairly fluffy lather with only so-so cushion, okay primary lubricity and little secondary. These latter points were addressed in later reformulations (but introduced their own problems). If you mix up the soap with less water to thicken it up, lubricity suffers. If you add more water, it's the opposite. No surprise there, but at its best, it doesn't compare to the status quo today. But like I said, it's still a decent shave and quite a few of the old scents are nice.

The aftershave, priced at $24.95 was (and still is) far more than it's worth. It's a fairly simple formula and most contain alcohol, water*, aloe, glycerin, alum and occasionally, menthol. The water is often "rose water" or "orange blossom water" or the like. Sometimes there are one or more hydrosols (essentially more water) and various other ingredients (i.e. hedione, seaweed extract, carrot extract, etc.). The latter, I suspect, amounts to "fairy dusting" as it's called - putting in just enough to list it as an ingredient, but provides no real benefit. The healing properties are minimal (it barely soothes razor burn) as is the moisturizing (glycerin is the only agent providing any measure of it). The alum will stop weepers, but also tends to dry and tighten the face. It was interesting back in the day, no doubt - but not something most people want in their aftershaves today. Like I mentioned for the soap, the standout feature is scent strength and longevity.

Hardware today consisted of the raw #StandardRazors razor with a #PolSilver blade on shave three. The brush of choice was the #SOC, as I wanted to load heavily - to combat overly fluffy lather and use up the soap faster... The suds were generated and kept warm in the #GTP scuttle.

I had a nice shave, but certainly not memorable. Skin feel is decent, but my face still feels slightly irritated, a little tight and not terribly moisturized. In fact, the alum gives it a slightly odd feeling; kind of like how your skin feels when you're at the beach... There's that salty feeling on your skin (alum actually is a salt). This is another reason I don't post many Phoenix Artisan Accoutrements SOTD reviews... The shaves leave me nonplussed these days when there are so many better products available. Again, I need to reiterate that we're talking about software from 2015 - however, only the soap has "improved." The aftershaves are still the same. The best - and only - attribute that stands out is excellent scent strength and longevity. If you can find a scent you like, that's a good thing. I'm truly not hating on PAA here - it is what it is... Old school software from a time when there's wasn't much else - at least as far as the soap goes...