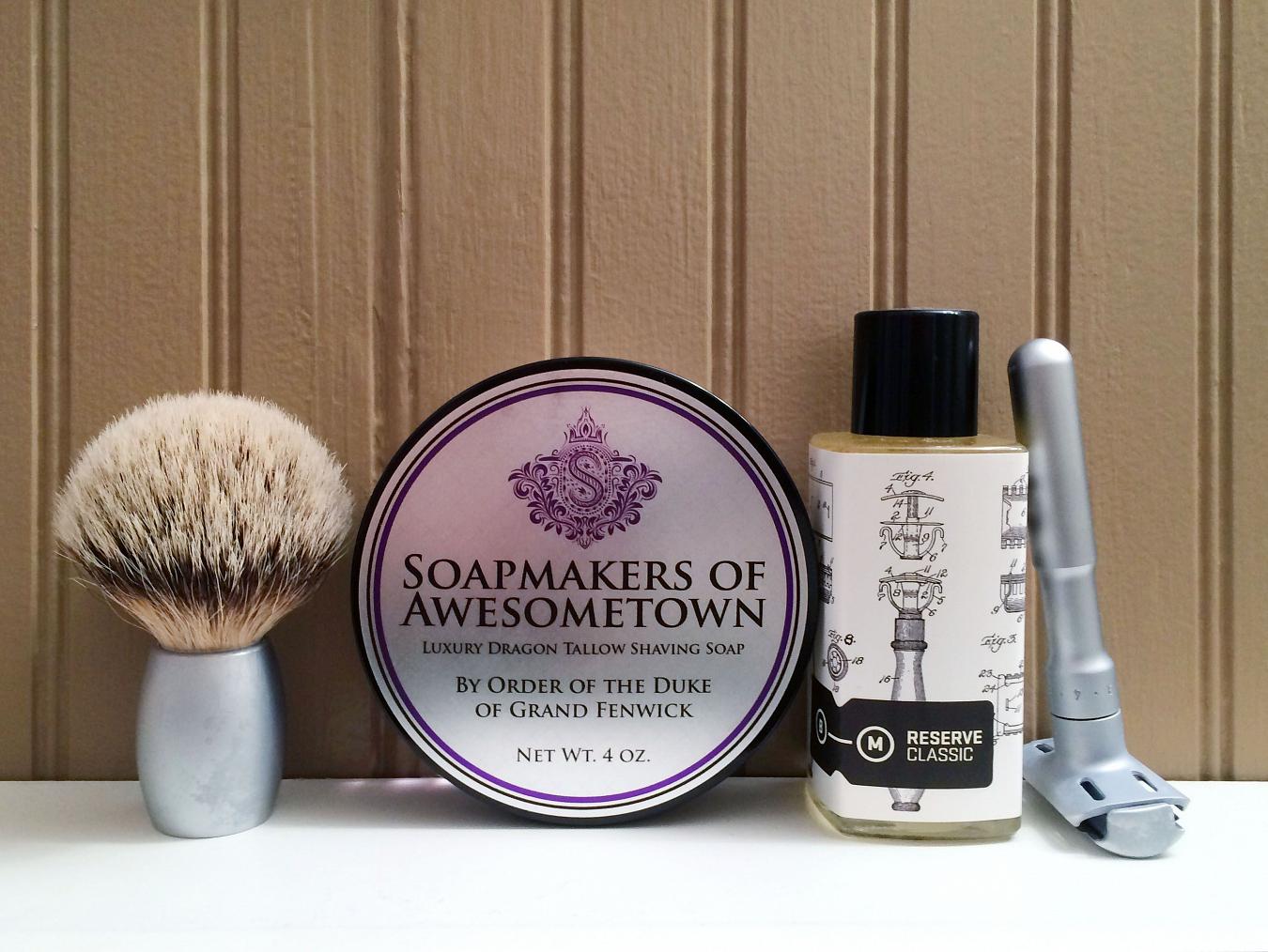 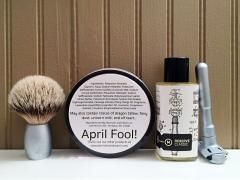 Behold - the awesomeness that is dragon tallow! There's more than meets the eye face in this Barrister and Mann Soapmakers of Awesometown #soap release!

This soap came as a bit of a surprise to most people, appearing on the #BarristerMann website just in time for the spring 2017 releases on April 1, 2017 almost like it was snuck in there... In fact, more than a few thought it was an April Fool's Day joke (and perhaps didn't order it). It had a cost and could be added to the cart, however - and if you did - you got a tub of this very unique soap offering.

A long time ago, in the early days of Barristers and Menn (not to be confused with men, who are a different species), there was a grand pogonotomical city known far and wide as Awesometown. Here, master soapsmiths employed superheated dragon tallow vats and brushes with bristles of iron to produce some of the finest, slipperiest soaps ever employed in the shaving arts. Tragically, their craft was lost during the Badger Wars, and no such soap has been seen again for a thousand years. Until now.

Let's talk about performance. It's clearly a new soap formula as the description says so, but also mentions it being lanolin-free... Indeed, if you look at the ingredient list, and the order of same:

...and compare it to the current standard glissant base (Lavanille seen here):

...you'll notice that there's definitely something going on here. The order (and thus the relative quantities of each) have been switched up quite a bit. So this is definitely more than just a lanolin-free soap formula. Actual performance is quite good! It takes a touch less water than the usual glissant formulation does, but in the end produces a fairly similar (though intangibly "different") lather - with perhaps the most noticeable difference being a bit less in overall volume, comparatively. It's quite creamy and plush, with lots of primary and secondary lubricity so not too surprising there, considering our expectations of Barrister and Mann these days. While the lack of lanolin will appeal to those with a specific allergy, it's not vegan. There's just not enough demand for vegan soaps as tallow outsells them 3-to-1.

Scent-wise, think of this as a "kinder, gentler Passiflora." Both are based on passion fruit, but whereas Passiflora (see the full review here) has notes of passion fruit, galbanum, cinnamon, bergamot, rose, geranium, lavender, and tonka bean... The Soapmakers of Awesometown soap has instead notes of passion fruit, lavender, sandalwood, citrus, and ylang ylang. The former is spicier, more floral overall while the latter is a more approachable sandalwood and ylang ylang on the base. This one "feels" a bit less fougére, though both have similar, but different floral (galbanum, rose and geranium vs. just ylang ylang- both have lavender) and citrus notes (bergamot vs. "citrus"). More people will appreciate this scent, I'd say - but being a fan of passion fruit, love them both. It's worth pointing out that neither of these particular soaps will see the light of day again...

For the finish, I went with a match that just felt right... Barrister's Reserve Classic aftershave. I did an extensive review of Classic so check that out. I won't get into that here. If you haven't tried it, I'd highly recommend it. It's amazing stuff, and I'm quite stoked that there will be a matching soap come June 9th, 2017.

Hardware choice for today fell to the #Merkur #Futur razor with a #PolSilver blade on shave three, while the #Dovo silvertip badger brushed worked up a fine, fine lather in the #GTP scuttle, where it remained plush and warm throughout the shave. A setting of "2" on the razor ensured a typically efficient shave, yet relatively mild.

This is a very interesting and one-off release - Soapmakers of Awesometown is sure to go down as a Classic... It's a new soap formula yet reminiscent of the glissant base. Performance is as expected, the scent is fantastic. The approximately 700 tubs that were made sold out very quickly; first from the Barrister and Mann site and then quickly from the suppliers that had stock on-hand (including on Amazon) as word spread. Much like Passiflora which shares a not too dissimilar scent, it will be sought after by many fans (and collectors). Though I suspect we might see more of this base down the line... April Fool's is right! Now go back and read this review again - slowly. ;)

I will be adding this soap to the History of Barrister and Mann (and others) shortly.

In case you didn't quite "get it" - Soapmakers of Awesometown is a beta test of the upcoming Barrister's Reserve soap coming on June 9, 2017.

Will says, "SoA was really a beta for Reserve so that we could collect feedback and make alterations to the formula accordingly. So you're not really missing much by not having tried SoA; Reserve is a FAR superior product." Either way, it's still a great soap [base] and an interesting alternative to the tried and true Glissant formula.