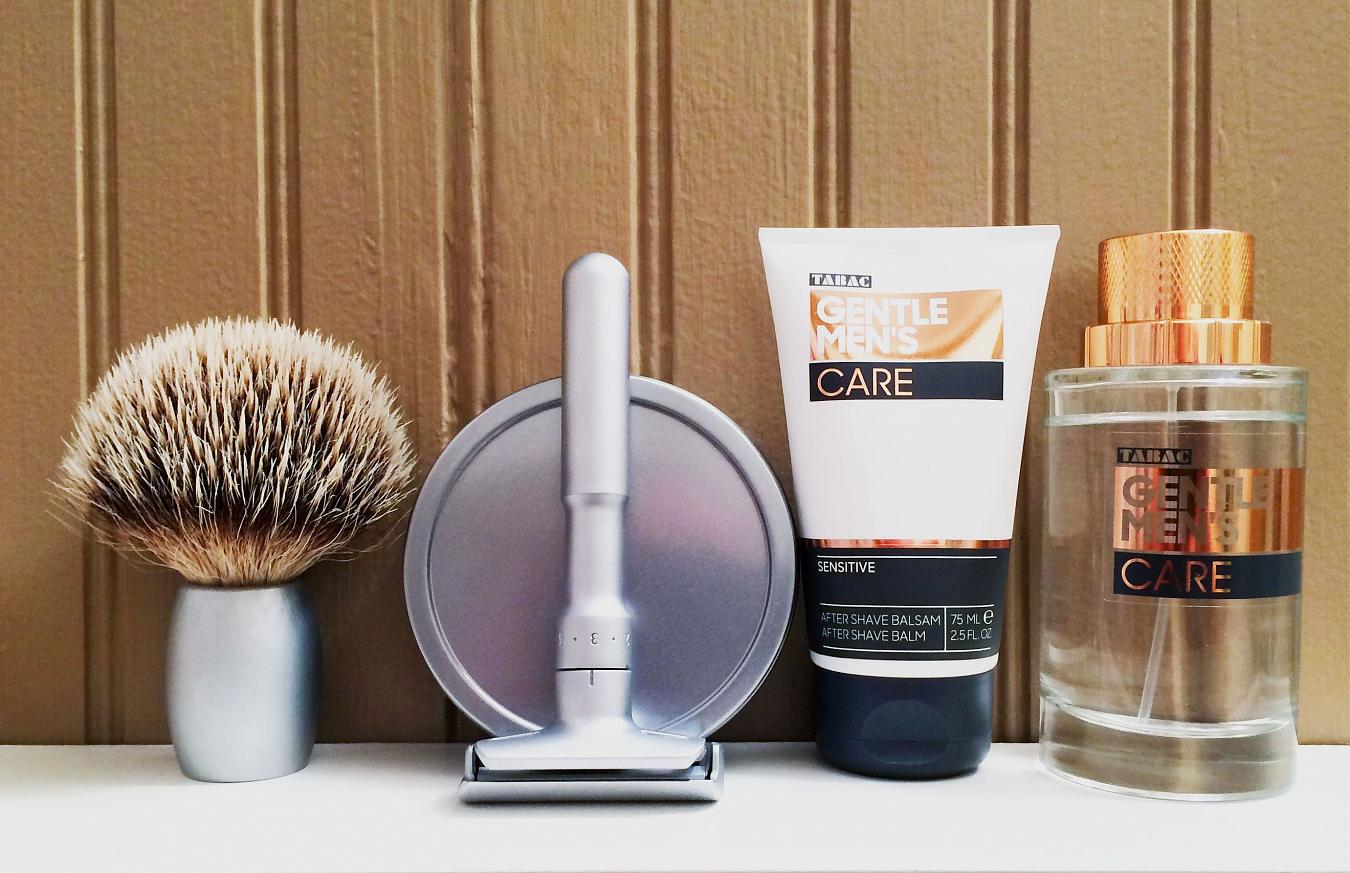 For today's SOTD I'm #testing out a "mystery soap" for someone... Followed up by Tabac Gentle Men's Care #balm and #EdT!

I've reviewed Tabac Gentle Men's Care extensively before, and I don't want to repeat that here, so I can focus on the #soap instead. So definitely check that out if you're curious. It's really good stuff by the brand we all know and love...

So yeah, a week or so ago an opportunity came along to take part in a test of a new soap. I won't divulge any information as to who's behind it or other details. The request was simple enough; test the soap and provide feedback on it. In order to focus on performance of the soap - it was left unscented. It came in a rather nice tin, small and sturdy, in a dark grey color that's reminiscent of CRSW and rustproof. I decided to load heavy, as I do with any new soap and hit it for a full 30s. There wasn't a whole lot of extra room at the top, and it was just wide enough to take my brush - meaning that the lather that was building up as I loaded, spilled over the side a fair bit. And from the look of it, it seemed like there would be a ton to be had in the scuttle. I whipped it up but it didn't really explode as I expected - alas, I actually had just enough for three passes. In fact, the lather wasn't quite fluffy nor was it dense and creamy - it was somewhere in between - and too thin. I had to apply it to my face in such a way that I couldn't see my skin beneath. I started off with only a little water, added a bit more as I whipped it up to boost lather production (but not too much that would account for the resulting consistency).

The shave was a really nice one overall, but I'm not sure I'd attribute that to the soap... Being thin, there wasn't any appreciable cushion. Glide was okay but secondary lubricity just wasn't there. I can't comment on the soap's post-shave face feel properties since I went with the Tabac finish - though there are coconut and shea butters in the soap:

I'll have to give it another go to try and dial it in, but my suggestions therefore, would be to work on making the lather thicker - both denser and creamier. Add a bit of glycerin or tweak the other components to add more primary and secondary slickness. I think the soap is close, but in today's artisan climate, competition is very fierce and it will be judged critically against some seriously top-tier stuff. As mentioned, the soap was unscented, so I can't judge it there - but I might also suggest spending quality time in developing unique (or at least "classic") scents with top quality oils.

The hardware today consisted of my "newly rediscovered" #Merkur #Futur razor fit with a fresh #Gillette 7 O'clock (black) blade set to "3" for Monday whacking. I got my shipment of 400 additional #PolSilver blades (because you know) over the weekend, but I wanted to try out my previous go-to blade. Just in case I need to consider an alternative... But I digress. The #Dovo silvertip badger brush swirled the suds in the #GTP scuttle.

An interesting experiment with a completely unknown soap and artisan(?) which left me with mixed feelings. Like I said, it was a good shave... But the soap needs tweaking. To be honest, all soaps work. But nothing stood out for me. I'm either picky - or spoiled by the really, really good stuff available today. Hopefully the suggestions I've made will be taken as constructive criticism and the issues ironed out... Just remember, it's a tough market out there.