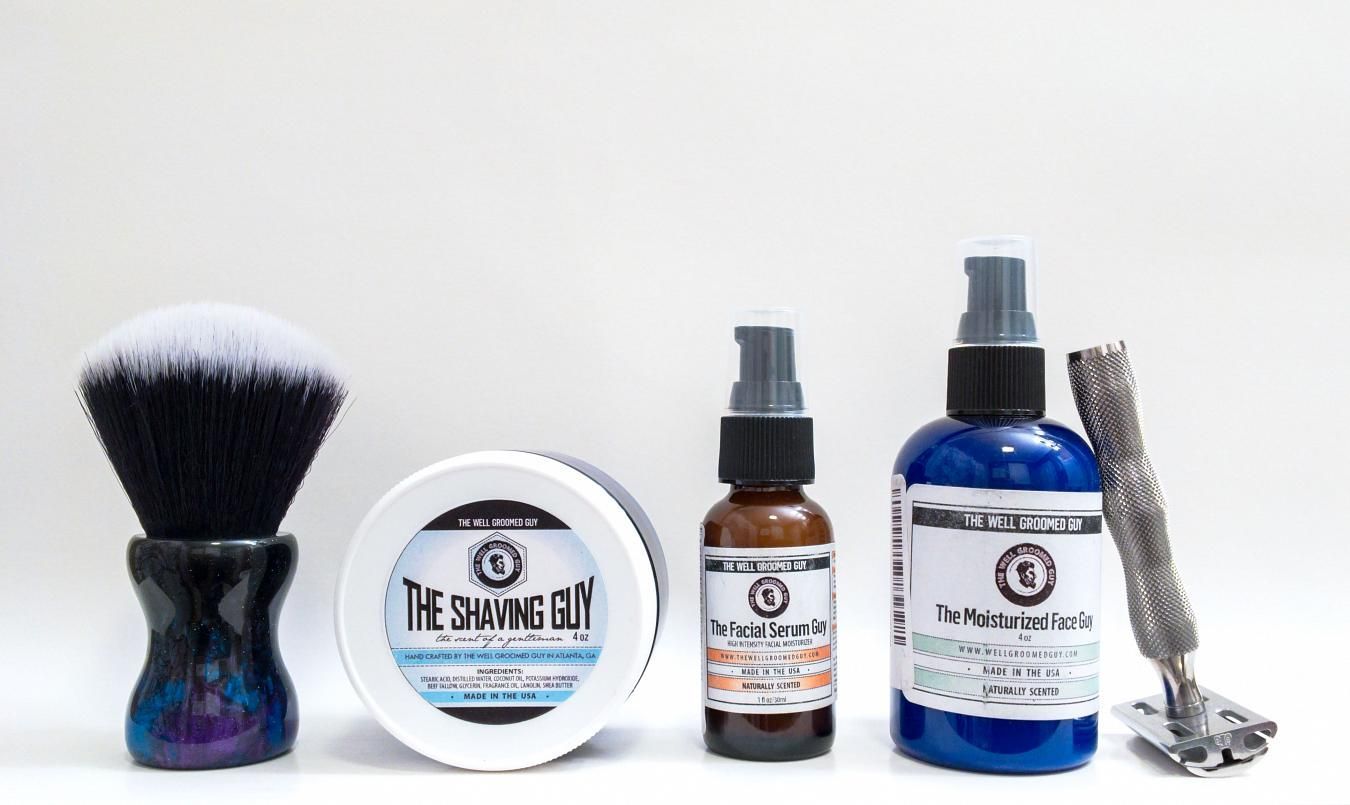 Trying out some products from the relatively unknown The Well Groomed Guy in the The ___ Guy line of products, including #soap and #balm.

We have noticed that many in the industry refer to themselves as "artisans". We want to make it clear that we at The Well Groomed Guy are the farthest one could be from being called an Artisan. We are just a group of folks who like making cool grooming products for Men!

Today we look at several products by way of The Well Groomed Guy hailing from Atlanta, GA! They're a couple of folks that stress they're not artisans; they just like making great performing products. They currently offer six products, each having a similar name yet denoting the function of the product. The format for example, is The Shaving Guy, The Moisturized Face Guy and The Facial Serum Guy which coincidentally, are the three products we're trying out. The scent varies between them, all of them light - letting you wear whatever scent you want for the day, rather than imposing one. Lastly, the ingredients are hand-picked, all natural and organic.

The packaging is fairly nice, save for the soap (see below). Two of the three products tested today had blue PET containers; one amber/brown. Interestingly, the soap is pictured in the latter on their website (which leads me to believe they're still figuring out this aspect). The blue looks stunning, in my opinion. Two other products they offer come in a clear - and a black container. The branding is clear with The Well Groomed Guy circle logo, but from there the labels get a little muddier as one half are different from the other half. Finally, the labels seemed a bit... Haphazardly placed and fragile (not waterproof or plasticized in any way). Certainly not deal breakers, but a little more attention to detail in the labels and container consistency would take the cohesiveness and overall impression to the next level for the brand.

The soap is lightly scented with notes of citrus, sandalwood and lavender. It's not complex by any means and it was easy to sniff out the notes despite the light scent strength. Neither should be seen as a negative; rather a feature and by design. The other two products, with a "natural scent" were much less descript... But they did smell fresh and clean. All work well together - or with most anything else - for that matter.

I tried the The Facial Serum Guy out last night, seeing as it's more of a hardcore moisturizer; perfect for putting on in the evening and wearing overnight. It comes in a little bottle, as you actually need... Very little. Rubbed onto the face, forehead and neck, it soaked right in with a light massaging action. It never felt greasy or heavy, but the moisturization was quite sublime and noticeable. At $15, it's a good value compared to most other products of this category.

This morning I went with The Shaving Guy soap, which unfortunately got a little too much hydration - making for a somewhat runny, airy and unstable lather. But it was obvious there was more performance to be had once properly dialed in as evidenced by the lather improving as it progressively dried in the scuttle during the shave. Part of the problem was the size of the tub. It's taller rather than wider, meaning you could only load with a back-and-forth twisting motion (which is terrible for brushes). I loaded for nearly a minute (twice my usual) and made a little bit of a mess over the sides (but better than most tins, as there was about 3/8" air space over the soap, before the tub lip). I'd like to see this improved.

On the positive side, the soap seemed pretty slick; more so primary but the secondary wasn't too shabby either. The scent was subtle, yet very nice during the shave, and the resulting face feel was pretty good as well (but not stand-out). I'll definitely have to give this another go to be fair and I'll post an update. At $10 for the tub, I'd have to say it's an excellent value considering the 4oz. of product - provided the actual performance is better. The ingredients:

I wrapped things up by applying The Moisturized Face Guy (as they offer no true aftershave or balm). Like the serum, it soaked right in - quicker even. Not as intense and moisturizing, but it was more than enough. The resulting face feel was nicely moisturized, smooth and supple - but not tacky or greasy. At $17 for the bottle, it too is a good value.

As mentioned, none of the products impose a scent on you. While you can detect a little of it on the skin (for several hours) - you definitely want to go with whatever cologne you're feeling for the day. For what it's worth, I went with #Guerlain Vetiver deodorant and Eau de Toilette. It too is fairly light with shorter longevity than I'd care for - but made a fairly apropos finish.

Hardware consisted of this week's favorite, the #TimelessRazor rocking a #Stork handle and a #PolSilver blade on shave four. The brush is making its debut today, coming from Milton over at #TurnNShave. Called simply First anniversary #9 it was one of ten brushes released for his one-year anniversary, and features a one-off commemorative coin. It features blue and purple resins at the bottom third and black for the top two thirds; all of it sparkly. The knot is new to me; a Tuxedo in a fan shape of 26mm. He calls it the Quartermoon. The bristle properties are the same between shapes, but the fan shape makes for a much easier, better splay - ideal for face latherers (rather than a bowl or scuttle). Regardless, it performed very, very well. I see more of these knots in my future; perhaps a 30mm. The #GTP scuttle, naturally, did the needful.

Overall, I found the #WellGroomedGuy products to work as billed; natural ingredients, lightly scented and performant. I definitely have to give the soap another go to rule out my over-hydrating it for the less than ideal lather properties. Mainly it wasn't very dense and thus cushioning - but the slickness was very nice overall, as was the face feel. So it all kind of fits. The moisturizing products performed excellently and as expected. The products seem to provide good value but of course, longer term testing is in order. If you're curious about the brand or have a preference for lightly scented, natural products - give them a try!