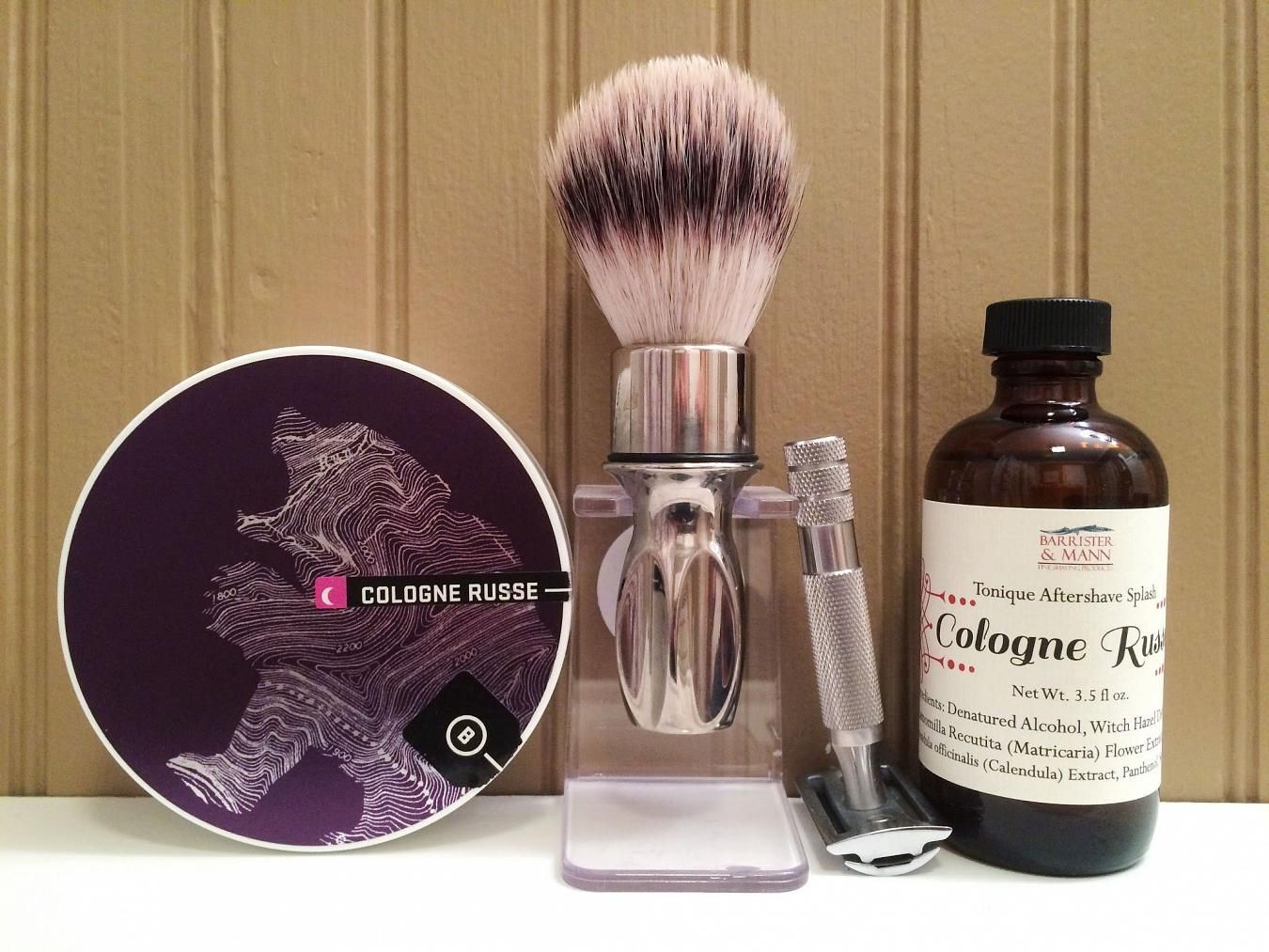 Today's SOTD is none other than Barrister and Mann's new Cologne Russe combo of #soap and #aftershave!

First, let's talk about the new packaging, as seen on the soap. Dimension wise, it's the same diameter as the old, but a tad lower profile. Not a big change, really. Though it does make loading fresh tubs a tiny bit messier as there's less empty space. They're heavier and more durable than the old as well, and no longer translucent.

The label and design is where the big news is! All future releases will have a label like this going forward. It's classy, modern, abstract and absolutely stunning! If you look closely, you'll notice the thought that went into its design... The Russian bear is composed of a topographical map of Siberia and even the crescent is fitting. On the side are the major scent notes and on the bottom, the UPC and ingredients list. There's also a sticker that wraps over the top and down the side. On the pro side, it discourages tampering and shows you that it hasn't been opened. On the con side, it's messy should you choose to remove it and can damage the top label (granted it's not really meant to be removed). My advice is to leave it on, but slit it with a razor blade before twisting off the top... I checked, and retailers that carry #BarristerMann products have been provided testers for this reason.

Cologne Russe has been around for a while as a Tonique aftershave, but now it's available as a soap as well - and it's in the latest Glissant formulation (meaning safflower seed oil in place of almond oil) and it performs absolutely awesome. Thick, creamy lather that builds easily and is wonderfully slick (with loads of cushion and secondary lubricity for touch-ups) - it also has a resulting face feel that's sublime. The ingredients speak for themselves:

The scent is unique, sophisticated and complex. It has notes of lemon, bergamot, petitgrain, and herbs with a dry down to violet, rose, bay, and amber. The scent is distinctly warmer than most other cologne-type fragrances, owing largely to its inclusion of castoreum, benzoin, and vanilla. You definitely get a citrus vibe, but the amber and vanilla give it a twist... And the other notes like the bay and florals add a certain something to it, that makes it stand apart from the crowd - definitely not your typical, one-dimensional citrus scent. It's a sweet spice.

There it is! Awesome new packaging with stunning art and subtle improvements all around. The scent is unique, rich and complex as you've come to expect from B&M - and the performance is equally top-tier in the shaving world. More than any other, it's what I reach for these days.

Apparently enough people have brought up the seal sticker that they will be changed after the current production run finishes. This has had the side effect of delaying the move of the remaining standard offerings to the new packaging from September to October - and then November...