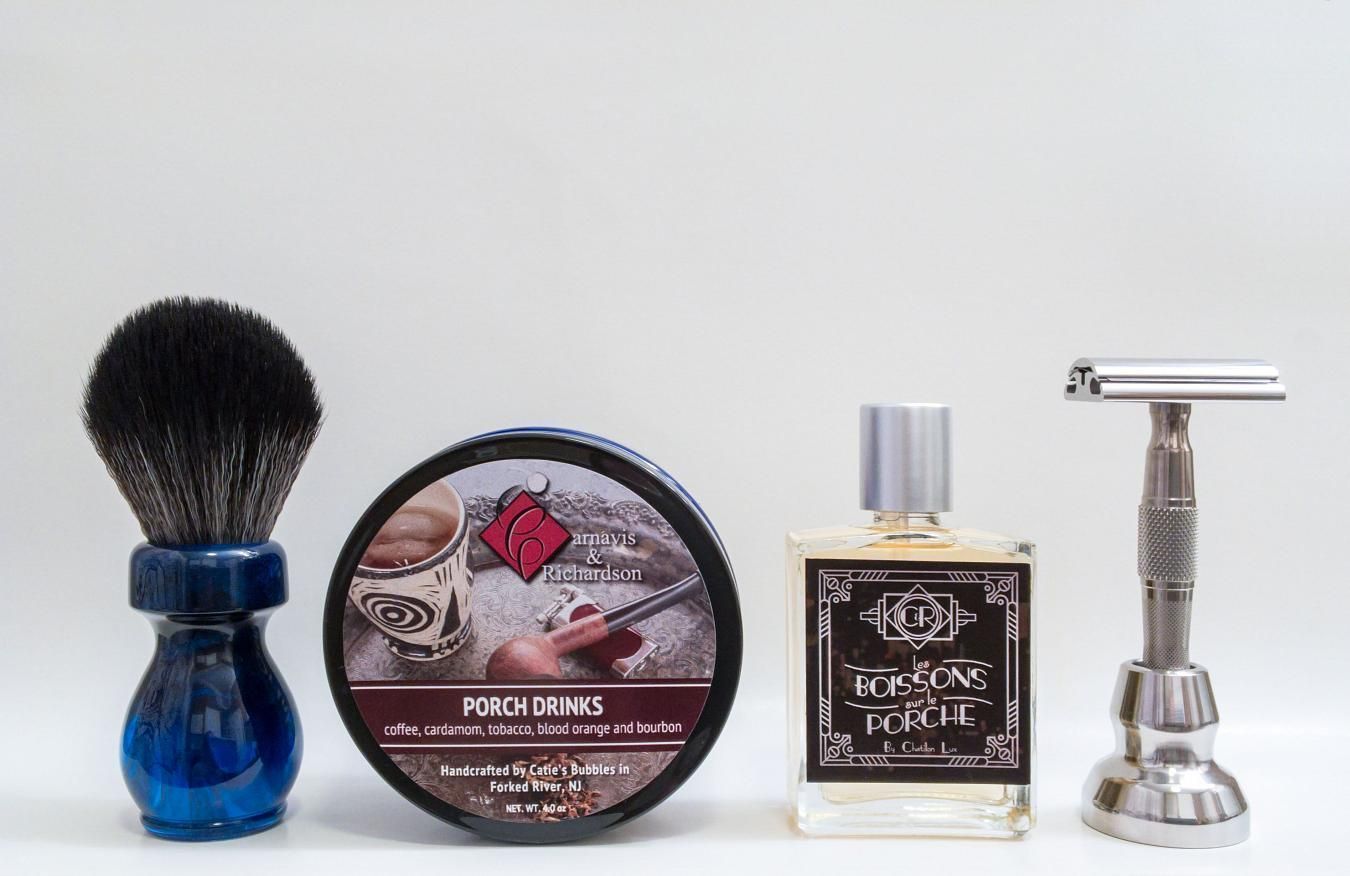 The backstory is that some artisans got together over drinks, and Porch Drinks is the result. Distributed under Carnavis & Richardson (Josh and Vince; the former being responsible for the notes) but the components were made by two separate artisans. #CatiesBubbles made the soap, under the name Porch Drinks while #ChatillonLux made the aftershave, under the name Les Boissons sur le Porche (French for, what else - "porch drinks"). There was an initial release in December 2016, with another batch in December 2017. The latter has a full 4oz. of soap (the former had only 2oz.) and the latest bottle and labeling styles on the aftershave (the former had a previous version). Both are rather Limited Editions and it's the latest that you see here.

The official notes include coffee, cardamom, tobacco, blood orange and bourbon. Yet interestingly, both Catie's Bubbles and Chatillon Lux were free to interpret those notes as they wished... While all the notes are there, they're subtly different and more complementary rather than matching.

The soap has a sweet, almost Cavendish pipe tobacco scent when dry, but once lathered, the blood orange and cardamom blossom to add a slightly fruity, spicy air. Both the coffee and bourbon are more undertones and rather subtle. The soap loaded and lathered easily, producing a copious amount of denser, slightly fluffy lather with good cushion, very good primary and good secondary glide with a nice face feel. This artisan's soaps generally go in the $14 range for 4oz. and considering the performance, is an excellent value. The ingredients are fairly simple, yet effective:

The aftershave scent is, as mentioned, different from the soap. While all the notes are there, it opens instead with the blood orange and cardamom on top. The bourbon brings up the middle as the citrus burns off, with the tobacco forming the base with a hint of coffee. The cardamom is omnipresent, but fades into the background only slowly and right up until the end. Being a unique note, it's what I detect most throughout the accord. Interestingly, the sillage starts off strong but fades rather quickly for me. What remains has a longevity of a couple of hours but only as a weak skin scent before long. The ingredients are standard for the brand's aftershaves (though I prefer the toners, which are alcohol free and more moisturizing):

Hardware for today consisted of the #TimelessRazor in a "mild edition" with a #Stork titanium handle with a fresh #Voskhod blade. Fairly new to me, I found the blade to be nice, but not as smooth or as close as my usual PolSilver blades. Continued testing is in order... The brush is a recent offering from #ThatDarnRob with a larger, bulbous, translucent blue handle and a 24mm BOSS knot. While the knot matches the black accents of the products, the blue matches nicely to the soap tub, which is a similar hue.

A lovely shave, but I was a little disappointed by the perceived sharpness of the Voskhod blade - and by the strength and longevity of the aftershave. Porch Drinks smells lovely yet left me a little wanting. As usual, I'll have to give it another go, being new to me - before I form a permanent opinion on it. Same thing with the blade. You have to try things at least twice (if not more) to get a complete picture.