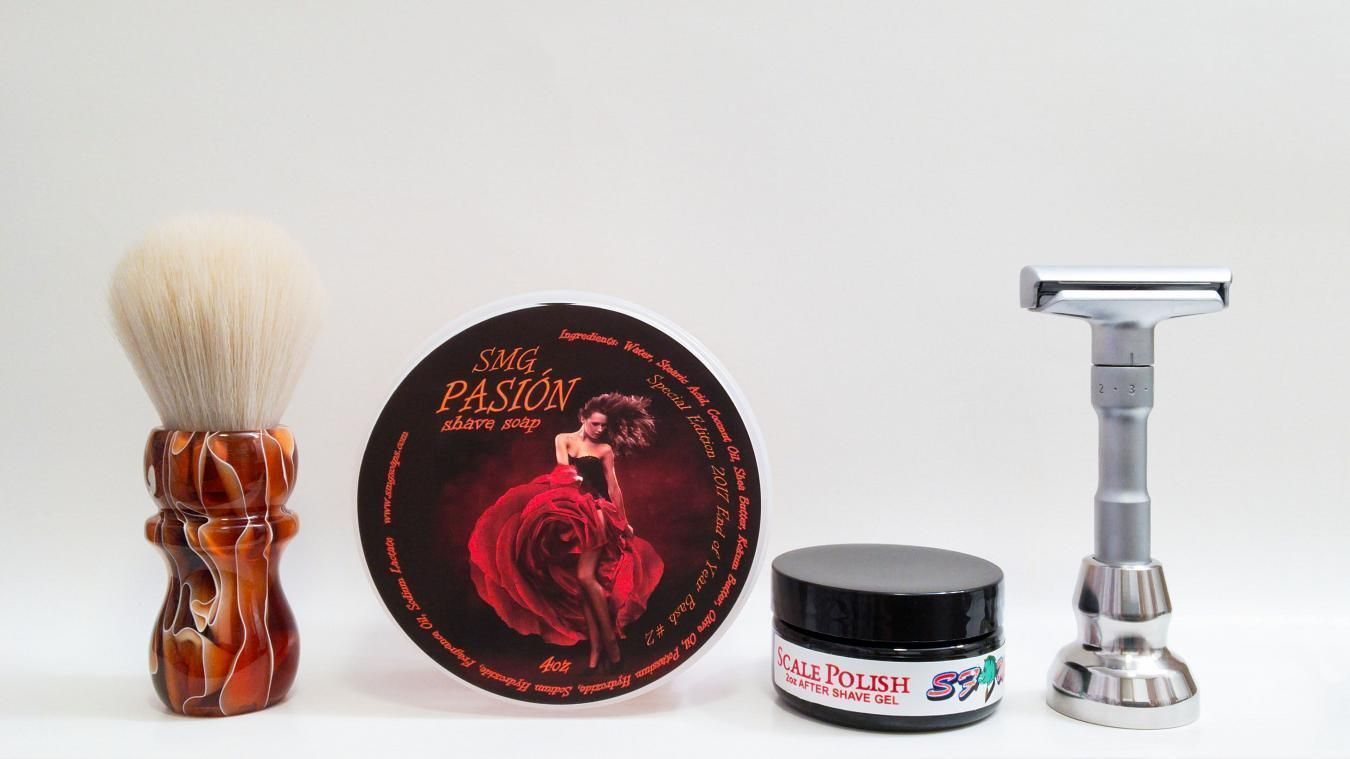 The soap today is courtesy of #SMGSoaps and is a Limited Edition for the SFWS EOYB2 event. Similarly, the aftershave (Scale Polish) is courtesy of #dapperdragnsoap. Both were included in the goodie bag distributed at the event, along with the Barrister and Mann Citricuyá soap and aftershave combo, plus a T-shirt. I've been a bit busy with all the releases of late, but finally got around to testing this combo today.

Packaging for both the soap and post-shave product are fairly basic. Oddly, the SMG Soaps website spells the soap as "Passión" while the label says "Pasión." Perhaps an error? I'm going with the label... While lovely, it's printed on matte paper. I suspect it won't hold up to much abuse. The Dapper Dragon Soaps label appears a bit more substantial in that regard, and is only affixed to the side, with nothing top or bottom.

The soap is one of about eight (plus one unscented) offered by SMG Soaps which is based down in Florida and run by Jon Romanov, which started up around the middle of summer 2017. The official list of scent notes include passion fruit and earthy woods. It's worth pointing out right up front that the soap contains FO (Fragrance Oil) and is stated in the ingredients, which are generally rather nice:

I had heard from a particular source that the FO(s) used were for candle (and soap) making; a little digging pulled up numerous candidates, though it seems more likely that two were used (one for passion fruit, the other for the woods). This shouldn't be alarming, as most FOs can be used in such a manner - as well as EOs (Essential Oils). It's just fragrance, after all... Though some are clearly better suited for intimate skin contact than others. Needless to say, I did go into this a bit worried about skin reaction in the back of my mind. My skin is not overly sensitive (only one soap has ever caused an adverse reaction) and found none here.

The soap does smell of passion fruit, with hints of nondescript woods. I have a thing for the fruit and have several passion fruit soaps that I love and use. So I was at least eager to give this one a go. As with any new artisan's soap, I loaded a bit heavier at 30s. The soap loaded and lathered easily. However, the resulting lather wasn't as impressive. The lather was somewhat fluffy, with minimal cushion - with good primary and residual slickness.

The lather was a bit odd. It started fluffy, but as the shave progressed seemed to almost become slightly creamy. The biggest issue I saw was that the lather broke down in the scuttle. Very few (if any) of the modern soaps these days do this. A quick whip up with the brush and a few drops more water and it rejuvenated perfectly well... But it remained somewhat "thin" on the face. I had a good shave, but I wasn't filled with confidence. Skin feel was nice, post-shave. I generally give any new artisan at least two shaves, to rule out a fluke - and I plan to do that here. Perhaps it's a matter of dialing it in or using a different brush (more on the latter below).

Also new to me was Dapper Dragon Soaps aftershave product, called Scale Polish. It's not a balm; more like an aftershave... But in a slightly viscous gel form. Definitely unique, and rather novel. As the scent was Naranja (Spanish for "orange") it was a medium yellowish color. It was easy to dip a finger in and massage between the hands before applying it to my face and working it in. The ingredients, are fairly simple:

The resultant face feel was fairly nice, of a "dry" (silky) sort but healing and moisturization were only so-so. Not at all tacky. As it turns out, the reason for this skin feel is largely the result of dimethicone (a.k.a. polydimethylsiloxane). This latter ingredient is what's called a "silicone-based polymer" and the skin feels just as you might envision, and as it is described - it leaves a thin film on the skin. In fact, it's been cited several times as potentially aggravating acne, making dry skin worse over time and other potential issues. The problem is, it forms a layer on (rather than penetrating) the skin, so while it feels nice, it doesn't actually moisturize. It's deemed safe by the FDA of course, and used in countless cosmetic products for the good properties, and here - provides that silky skin feel. This is the same magic ingredient in O'Keeffe's Working Hands Hand Cream (which is amazing) for example. You'll have to judge for yourself.

The scent strength of the Scale Polish is a good medium, but longevity is very brief. Not the fault of the product, rather the scent itself... Citrus oils are notoriously volatile. That said, it smells fantastic and well, very orange-y! Plan to use another fragrance for the day, however. Overall, I liked the Scale Polish as an alternative to aftershaves - where a balm isn't quite called for (e.g. warmer months).

Hardware for today included the #Merkur #Futur set on "3" for a nice, efficient shave from the #PolSilver blade. The brush is a nice piece from #WildWestBrushworks called Coffee and Cream that's fairly rare for the artisan. I've long been a fan of this particular resin/look and jumped on it. The colors just screamed for a synthetic Cashmere knot, with its cream colored bristles, in a 24mm size. A word about this knot. Think of it as the next step above a Plisson style knot; super soft, with a little more backbone. It wasn't floppy like the latter, but it's definitely not like a Tuxedo or BOSS knot. I suspect this might have had an effect on the lather results I got above. Next time I use the soap, I'll use a stiffer brush.

It was a good shave, but a little too wiry for a Monday morning. I didn't quite have confidence in the lather while wielding a highly... Efficient razor. The Scale Polish did an admirable job post-shave, but in the cooler months I lean towards more moisturizing products; not just aftershaves, but balms. Overall, my skin feels nice, but not really where I typically want it to be at this time of the year.