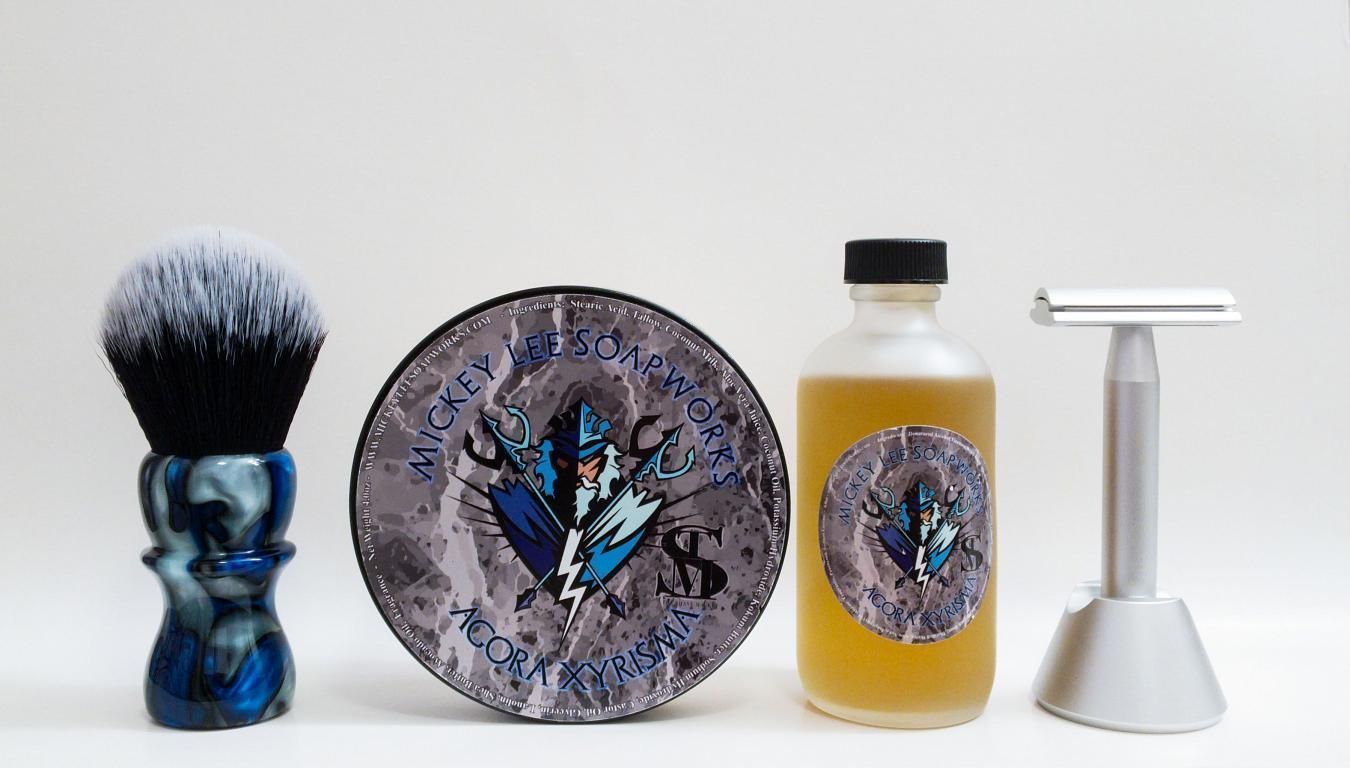 Weather these troubled times with a classic and a bit of mild unobtainium from Mickey Lee Soapworks (produced for a shaving group) called Agora Xyrisma in a #soap and #aftershave combo.

It's based on Drakkar Noir, but it isn't a dupe oil. We blend this in house and include notes of Tunisian rosemary, Siberian fir, lavender, sandalwood, bergamot and a hint of oakmoss.

I call Agora Xyrisma a bit of "mild unobtainium" because it was made for a shaving group on Facebook called The Shave Market. The quantities were fairly limited (though based on a pre-order model) and of course, originally only available through the group. Only two batches of Agora Xyrisma were made; in March and another in April of 2017. Agora Xyrisma has since found its way out among the population through selling off, so it's available from time to time. It's not too different than Lu'au which I reviewed a while back; it too was made for a shaving group.

The official scent notes are Tunisian rosemary, Siberian fir, lavender, sandalwood, bergamot and oakmoss. It smells quite a bit like Guy Laroche Drakkar Noir (which itself has top notes of bergamot, rosemary, lavender, middle notes of cardamom & geranium, and a dry down of vetiver, cedar, and fir balsam). I did a fairly extensive first impression of the Drakkar Noir set earlier, for comparison. Unlike Panty Dropper which was a straight dupe (FO or Fragrance Oil) of Drakkar Noir - the accord in Agora Xyrisma is mixed in-house.

A bit of trivia... "Agora Xyrisma" means "shave market" in Greek. Since Panty Dropper (also a Drakkar Noir scent) was originally made for the group (and later sold as a regular offering) they wanted something to tie into that. And thus, Agora Xyrisma was born!

On open you get that familiar, unmistakable citrusy bergamot, herbal rosemary and floral lavender. This is where you really feel the Drakkar Noir inspiration most. The scent then slowly dissolves into the middle, where the sandalwood bridges the fade into the base, where the fir and oakmoss reside, remaining as an undertone. The scent strength of both the soap and aftershave is a good medium. On the aftershave, sillage is a medium and longevity at 4+ hours and I can still smell it as a skin scent at some six hours after application. I'm a fan of the original, and this one's just as lovely, if slightly different.

Hardware for today's shave includes the #StandardRazors in a raw color, fitted with a fresh #PolSilver blade after a thorough cleaning after my recent trip to the Açores (Azores) where it served as my travel razor. The brush is the blue, white and black number from #WildWestBrushworks that's rocking a 26mm Tuxedo knot (via Maggard Razors) and did a plum job loading and lathering the suds in the #GTP scuttle.

While I have the original Drakkar Noir three-piece set, and the Dark Power soap from K Shave Worx it's nice to have another soap and (artisan) aftershave option. While it's not a straight dupe, it's close - and yet different - enough to merit having... And there's never a bad reason to have more #MickeyLeeSoaps products around!