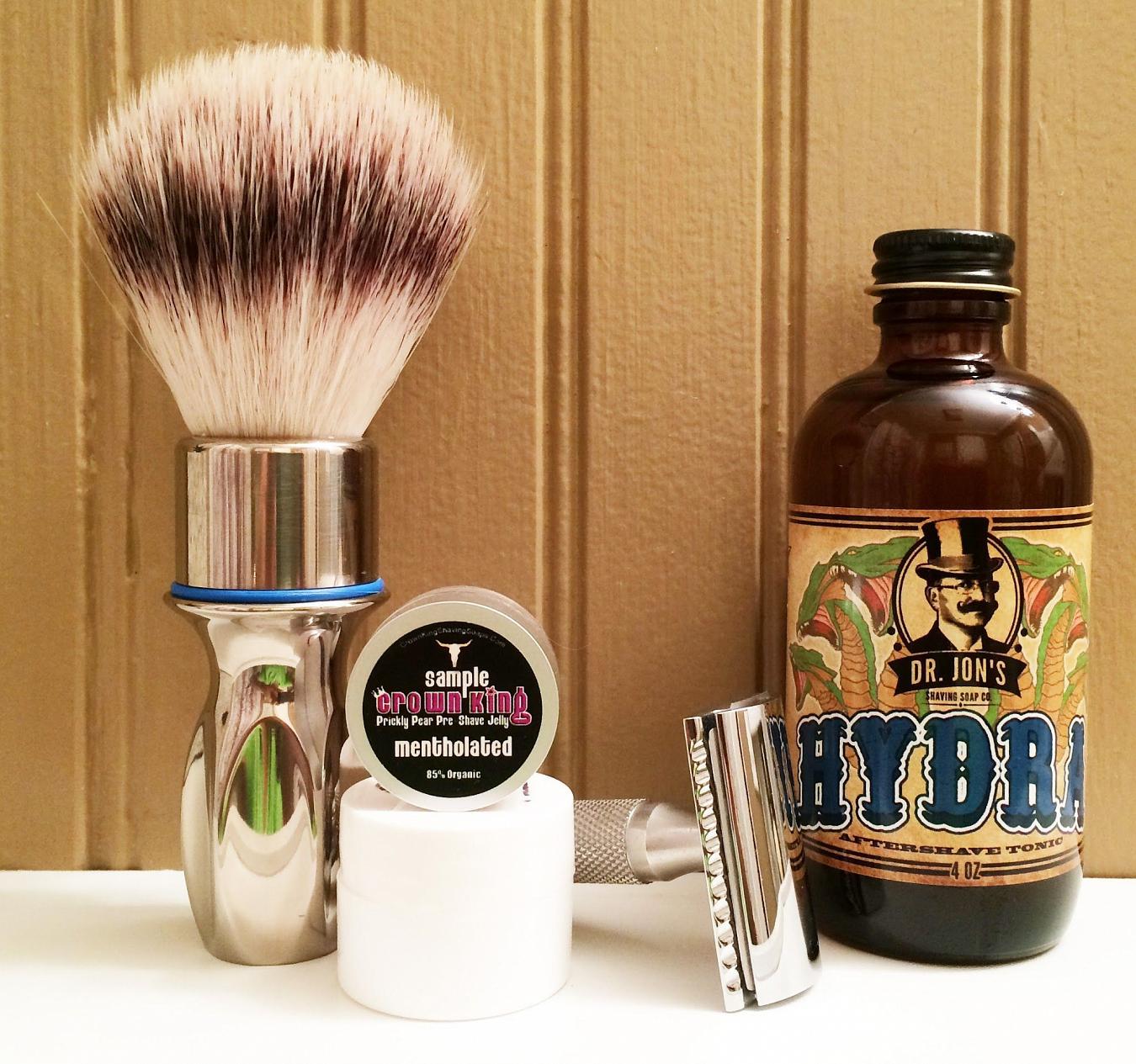 Apparently, an impromptu "Williams Wednesday" is afoot. For my SOTD today I'm using new products from Crown King and Dr. Jon's - and the theme is citrus!

Here we have Crown King (a.k.a. #PAA) samples of the Prickly Pear Pre Shave Jelly and Jabon de Guillermo (literally means "William's soap") to try out. So this shave is really all about the software...

How was the Prickly Pear Pre Shave Jelly? I used it on half of my face and neck and compared! Honestly, I wasn't terribly impressed. While it felt a smidge slicker, I didn't find it necessary. Part of that is because the soap already had plenty of slickness, so its efficacy didn't stand out. Maybe with an under-performing soap, that would improve. Also, while the initial menthol hit was intense - didn't last past the first lathering. Suggesting it could "make any soap mentholated" just doesn't hold water. If that's what you're after, there are plenty of actual mentholated soaps that will do the job. Finally, my pre-shave routine is simple - but solid. Therefore I'm not much of a pre-shave guy to begin with (I just don't find it necessary, personally). So this one's a miss - for me.

How about the Jabon de Guillermo #soap? First, understand that it's a recreation of the infamous Williams Mug Soap scent - that is, basically citronella. This soap takes it to the next level and it's like shaving with a bug candle. Don't get me wrong - I love citrus - but as Austin Powers says, "that's not my bag, baby."

Performance-wise, the soap was quite good. Very easy to generate lather quickly. But I clearly needed more product (or less water) in this first experience with the soap as the first pass and into the second, the lather was a bit thin. By the third pass, the hot scuttle evaporated just enough moisture and the lather started to come into its own. I plan to try again, as I do with any new soap - where I expect it will improve, perhaps dramatically. The lather was superbly slick with good cushion. The post-shave face feel was also excellent. Was it the slickest soap I've tried? No, I don't think so... I think Dr. Jon's has it beat, and his new formula will probably really knock our socks off.

I finished off with a healthy splash of #DrJonsSoapCo new Hydra #aftershave and like the soap, it's a boatload of citrus scents. The resulting face feel is excellent; among the best. Alas, citrus scents are quite volatile, meaning they dissipate quickly. We'll see how it fairs over the course of the day, but two hours later and I still smell an orangey grapefruit.

Hardware wise, I'm still going on the new #Mühle #R89 on the original #PolSilver blade - shave four (possibly five). Still an effortless BBS- shave though I think performance is dropping off a little. I suspect the R89 shines most with a very sharp blade to do its magic. The #GTP scuttle , as usual, kept things in check.

So there it is! Overall, a pleasant shave with strong citrus notes all around. Performance of all the products was quite good - but not quite "wow" level. Like I said, I'll give the CK soap (and jelly) another shot to test performance - but suffice to say, the scent of the soap is not for me. Williams Mug Soap performance was mediocre (at best) and the scent pretty much the same; therefore I have no nostalgic attachment to it. Shave on, brothers!